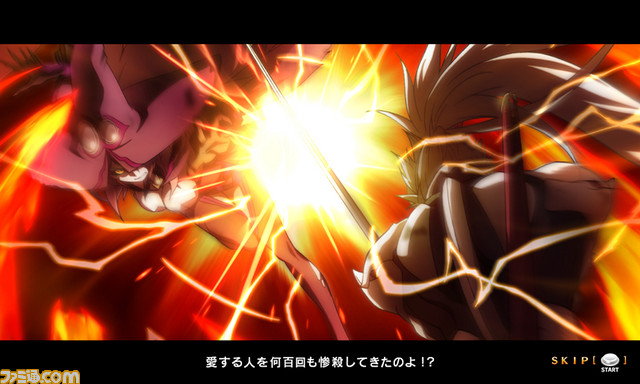 BlazBlue Central Fiction's second act is scheduled for a Late January release and with it comes various gameplay additions including the new "Speed Star Mode". It does not include any balance changes.

In Act 2, Nightmare Memory, the characters are gradually becoming aware of the "out of place feeling" of the world. Just what is the source of the unending tragedy's repetition? A shocking truth will become known.

In Speed Star Mode, the player must defeat random enemies within a time limit. The player character is "invincible", they do not take damage when they are hit with attacks, but when the time reaches zero it's game over. Time can be extended by performing various feats such as activating Overdrive, entering Active Flow or doing 3000 damage in a combo. There is a chance for encountering a "bonus character" that will give higher amounts of additional time when performing such actions.

Score Attack Mode's "Course D" will be unlocked and Sparring Mode is receiving a substantial expansion. Among the additions to Sparring are the ability to show command lists (for both the player and the opponent), a restart button and the ability to change the dummy's posing between standing, crouching and jumping.