+R's resident Trap Laying powerhouse, Testament pollutes the screen with traps, projectiles, and disjointed hitboxes in order to force the opponent into a disadvantageous position where they can begin applying their oppressive offense and okizeme.

Testament has two traps which persist on stage as invisible hazards. They can place Zeinest

Guard:
AllStartup:
11Recovery:
Total 31Advantage:
+2, also known as Web or Net, wherever their upper body is and it will stun and ensnare opponents which touch it. HITOMI

Guard:
MidStartup:
See notesRecovery:
Total 27Advantage:
-, or Tree, is trap planted at their feet which launches opponents and removes OTG state for combos.

Guard:
AllStartup:
22~81+6Recovery:
Total 38Advantage:
+16. EXE Beast is a projectile that travels along the ground—

Beast travels forwards from Testament whereas

Beast travels from behind the opponent towards Testament. One of each version of EXE Beast can be active at a time, and their timings can be manually adjusted by holding and releasing the attack button. With their powers combined, Testament can enforce one of the scariest advantage states in the game.

To supplement EXE Beast and their traps, Testament has Phantom Soul

Guard:
AllStartup:
30Recovery:
Total 58Advantage:
+2—commonly as Skull. Skull is a projectile which applies a curse status effect to the opponent on hit. The force break version is especially noteworthy because it applies the curse status on block as well as on hit. The curse status, causes Testament's crow to autonomously attack the opponent. Curse opens up even more flexibility in pressure and screen control, and even makes new routes possible, including unblockables.

In addition to their core traps and projectiles Testament also boasts a diverse toolkit featuring teleports, and a counter which applies a poison damage over time effect on hit, as well as a unique resource in the form of dolls. They do a lot very well, and have very few weak points, which helps make the character accessible for new players, and their high skill ceiling handsomely rewards players who are diligent in training mode.

After all, you have to be top tier to have the Bible named after you.
Playstyle
Note: Testament's defensive options are non-traditional. They are actually very good, but they cannot be used in the same ways as traditional DPDragon Punch A move that has invulnerability during its startup, long recovery, and a rising motion.s and reversals. H Beast FRC into blocking is one of Testament's strongest AbareAn attack during the opponent's pressure, intended to interrupt it. options. Forcing a trade using Nightmare Circular

Guard:
AllStartup:
8+5Recovery:
9Advantage:
+9 can be extremely valuable due to the poison damage.

Whenever Testament air throws an opponent or hits them with Master of Puppets, Testament gains between one and three dolls (up to maximum of 4). Whenever Testament places a net or a tree while in possession of one or more dolls, a doll will be consumed and an enhanced version of the trap will be created instead of the default version.

Useful as an anti-air and abare tool due to it's size and high hitbox.

Alternative to f.S for situations in which speed matters more than range.
This move commonly sees use in OkiwazaFrom Japanese "置き技", meaning "placed move". To pre-emptively use an attack with the intent of covering a specific space or to hit an opponent's extended hurtbox during their move's startup. situations outside of 5P range when f.S would be too slow.

Staple filler move for blocktrings and combos due to its expansive cancel and gatling options.

One of Testament's best normals to control space due to its disjointed hitbox, lengthy active frames, and relatively quick startup.

Great tool for frame traps because it is disjointed, safe on block, and staggers the opponent on counter hit.

This move is a slightly abnormal 5D. Testament leans backwards, moving their hurtbox with them, before becoming the slowest universal overhead in the game.

Testament's 6P does not fill the same role as most 6Ps in Guilty Gear. Although it is upper body invulnerable, its main use is as a mixup tool instead of an anti-air.
This attack is one of the fastest overheads in the game, and can be gatlinged into from any of Testament's close range buttons.

6P becomes especially potent when paired with FB Phantom Soul (FB Skull) or EXE Beast. FB Skull can force most opposing characters to crouch which gives Testament a free curse or combo, and EXE Beast can be used to catch the opponent attempting to escape or punish 6P.

Be warned that this attack is fairly slow, easy to counter-hit, has a blind spot, and is unsafe if uncancelled (and sometimes when cancelled, depending on the option chosen). There are also no gatlings into this normal that do not leave a gap outside of crouching hitstun, and as such it is susceptible to reversals or slashbacks. The gatling options also leave much to be desired -- the only potentially gapless/safe option off of 6K on block is 5H, which can whiff at max range

It may look like a poke, but this move is actually a combo ender and extender.

Because of these properties players should avoid using 6H in neutral without careful consideration.

This move is primarily used in order to confirm f.S into a combo.

Typical jab which is used as an abare tool and to quickly make the opponent block.

This move is a strong Anti-Air with good reward, but is punishing to miss due to the lengthy recovery on whiff.

Moves Testament forward roughly 1/3 of a screen and minimizes their hurtbox in the middle of the move.

Most appropriate jump-in but easily stuffed.

Switches sides and allows a combo afterwards, usually with either f.S midscreen, or c.S in the corner. The availability of combos out of throw depend on the opponent character. If a character cannot be combo'ed from throw, due to hurtbox/resources, then OTG 236P or EXE Beast okizeme is usually a good fallback. See the OTG Skull Quick Reference to see how to hit each character with 236P.

Midscreen throw does not reward a combo on

Knocks down, and leaves the opponent close making it good for oki. Grants Testament 1 doll.

A skull that slowly moves forward. If it hits, the opponent is marked with a "curse", that causes the crow accompanying Testament to begin attacking.

The crow can attack in any of the following patterns (K/D extensions noted in parentheses):

High Tackle sends the crow flying forward, aiming above where the opponent is. This can cover jump outs, and oftentimes will chase techs for you, such as after OTG Phantom Soul.
Dive is pretty much the same as High Tackle, but the crow aims directly at the opponent. Serves as a neutral annoyance, as well as filling gaps in pressure.
Feathers fires a spray of three feathers in an outwards fan pattern. The actual projectiles are slower than the tackles, but it covers more space and offers better lockdown on connect.
Transformation Attack is a delayed overhead, where the crow homes in on the opponent's location within a certain radius and swipes downwards with a scythe. The attack has insanely long untech time, all but guaranteeing a knockdown, and can be combined with 2K or 2D for unblockables.

Note that the the difference in the P skull and the K/D skull's patterns is done by the two having a different duration for the curse, the P skull lasts for 600 frames (10 seconds) and K/D lasts for 1020 frames (17 seconds). this also means that in rare circumstances it's possible to get extra curse attacks because some of the curse attacks finished faster than intended

The air version is generally preferred to over the grounded version.

H is similar use to the S version, but comes with its own quirks.

Counter which crosses up, poisons and knocks down on hit.

Tracking teleport. P teleports in front of opponent, K teleports behind. A lot of recovery, so generally should not be used by itself. Good for crossup setups in conjunction with EXE Beast.

Testament plants a tree at their current location. Entire animation is counterhit state, so any mindful punish is going to hurt.

Powered up tree comes with significant buffs on top of every other strong point of normal trees:

Sets a web/net trap. Will activate immediately if the opponent is in the activation space.

Powered web is indicated by the purple skeleton on hit.

Air version is invincible on frame one. 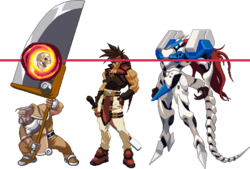 An enhanced Phantom Soul, which homes in on the opponent and slowly follows them. The projectile becomes active roughly one second after Testament has completed their animation. When the skull is active, it will have an aura surrounding it.
FB Skull will move downwards to a minimum height shortly after becoming active (pictured to the right).

This move is a great options in most matchups because the minimum height is low enough that it will force opponents to crouch or risk getting cursed. This allows Testament to set up overheads consistently.

Testament's only reversal, except it's not invincible after the flash (which may actually work in your favor)

S version is delayed, acting more as a trap and deterrent.

Super which scores knockdown and allows Testament to buff their traps.