Chipp does exactly what you'd expect, really. He's mobile, he's slippery, and he's got every tool you could want. With his strong set of normals, powerful mixup options, two good reversals, and a variety of options at all points in a match, Chipp can put on the pressure like no other as well as defend from it better than anyone else. As per usual, Chipp has low health, giving him some trouble with survivability, but this isn't a particularly big problem due to the prevalence of infinites rendering defensive values meaningless for the most part. With his unmatched toolkit, Chipp is a menace in every matchup.

5K
One of Chipp's longest range normal. It's fast and converts well but lacks a disjoint and is still not that big compared to other characters. Can reach half-screen when used with a dash.

f.S
Fast and disjointed normal but with incredibly underwhelming range. Can be decent when used with a dash but it still isn't fantastic.

5H
Chipp's biggest grounded normal with a decent disjoint, although it's slower than his other options and still not as big as other character's normals. Can gatling back into his S normals, although this isn't important due to the existence of CC. Inflicts high hitstun making it useful for CC infinites.

6P
Fast, Highly Active, and with 0 recovery. Somehow it's still kinda wack. The hitbox is tiny and there's a huge gap between the first and second hit.

2K
Alternative low option to 2P, although it's generally inferior. Not as useful as a poke as 5K due to it's smaller range and worse dash cancel.

2S
Slightly bigger and more disjointed alternative to f.S but is significantly slower and still smaller than 5K. Generally will go unused.

2H
Disjointed anti-air move. Could've been useful, but it launches the opponent a short distance on hit, meaning it leads to no continued pressure or combo. Still usable since it can be CCed for continued pressure but there are better options.

Ridiculously fast aerial with deceivingly good vertical reach. Works as an instant overhead on the entire cast, even Baldhead. Thanks to every normal being jump cancelable on block, it's very easy for Chipp to set this up with a varying amount of lows. On hit or block it can be canceled into j.236P (Air Alpha Blade) to either combo or continue pressure with another j.P. It can also be comboed into j.623P (Air Beta Blade) but this is unsafe on block and is less favorable on hit.

For uses besides mixups, it's a mediocre air to air.

j.K
Two hitting air kick. Since air games don't exist in GGML for the most part, the move isn't too useful in this game outside of Dust combo filler. Can still be used for air to air.

j.S
Two hitting sword slash. Hits twice and can very easily crossup, making it a good jump in and air to air.

j.H
Can be used for jump-ins like in later games, or used for tall-character specific infinites. The first active hitbox is above Chipp, but comes out on frame 1, and then the hitbox follows the motion of chipp's body from back to front.

j.2K
Funky little dive kick that is most notably used for going infinite against Pot and Justice without the need for CC. Reaches the ground very quickly when used later in a jump arc, making it very useful for changing air momentum.

A premium standing overhead. One of the few dusts which hits overhead, and a fast one at that. The range is limited and it hits high, so you may have trouble connecting on small opponents. Can be combined with Chipp's dash to do a halfscreen overhead.

Dust is extra useful with Chipp not only because it's a fast overhead, but since it can setup the Homing Jump Bug, allowing Chipp to chase after the opponent and continue pressure even after the Dust combo is finished.

6H or 4H
Best throw in the game. Puts opponent in the air while in reset state, meaning it's untechable. On top of that Chipp recovers before the opponent does. This gives you more than enough time to do either a 5P or c.S. You can then cancel into 623P as a "combo" (it's air unblockable so while it won't combo there's nothing the opponent can do to stop it) or gatling into another normal to force the opponent to land, causing a high/low/throw mixup. If you do this be careful of characters with air specials who can guard cancel.

6[6]
Chipp's Dash attack. Chipp moves across the screen so fast that normally you won't get it by the time you reach the opponent, and dash normals are generally better, but it's not bad.

The Blade which Slays All Under Heaven and Earth

P+K > 236X
One of the best instant kills. Has an even better low profile than normal but accordingly the hitbox is low to the ground, meaning it's less good (albeit still good) as an anti-air and whiff punish. It's tied for the fastest IK and recovers even quicker than most.

Chipp preforms a quick elbow before rocketing himself forward in a burst of blue flame, only stopping until he hits the enemy or the end of the screen. Very good for closing the gap between you and your enemy and is incredibly useful to catch your enemy while they're charging up, however it's easy to see coming from far away and is unsafe on block. Comes out near immediately as well. Can be used as a finisher for combos. Goes even faster if used with the Dash Cancel Bug (2366).

The move stops either when he reaches the wall or touches the opponent's collision box. On the air version, when he touches the collision box the move immediately ends with no recovery, allowing him to go into any air option afterwards. This lets him get more pressure and mixups. The ground version will have recovery but it's still safe unless guard canceled against.

Chipp's DPDragon Punch A move that has invulnerability during its startup, long recovery, and a rising motion.. Can be used as an anti-air because it's air-unblockable. Comes out very quickly making it a good reversal tool, though be careful, it's unsafe on whiff and block.

Higher charge levels cause him to add more reps to it, similar to a Shoryureppa. Unlike most moves with gaps in them, the opponent can tech but will instantly get hit by the next rep due to it being air unblockable, making it useful to have.

41236H
Fairly weak projectile, goes fullscreen but only knocks down on hit which might be punishable up close (research needed). Still nice to have but when Chipp can cover the same distance with a dash normal or Alpha Blade, both of which have higher reward, it's a bit pointless in his kit.

236S
Chipp's signature teleport. Only has one version that teleports a set distance. This can be used to mixup his movement and catch opponents off guard or guard cancel to escape pressure. The distance traveled increases if dash canceled (2366S), allowing him to teleport behind the opponent from almost fullscreen. This is especially useful against characters that like to hold one position like

214K
Chipp will become mostly invisible for a moderate time after this special. Can make his mixups harder to see, but without a reliable way to set it up in this game and his mixups already being fully unreactable, there's not too much use to it.

632146K
Command grab. Side switches on hit. Since it's instant in this game it can very easily be ticked into and is hard to avoid, but it leads to no continued pressure so normal throw is generally better.

Chipp runs forwards most of the screen and upon reaching the opponent does a ranbu-esque flurry of attacks. The finishing Beta Blade has a gap that can be teched and isn't air unblockable, but it'll launch the opponent high up so it can't generally be punished outside of characters with a move that reaches the ground quickly, like Chipp himself.

Does decent damage and in a more honest game could be a very useful combo ender, but in the context of this game it's always better to combo into an infinite. It does go very far in a short amount of time so it may catch an opponent moving forward, but the super flash gives away that you're going for it. It lacks any invuln so it'll run straight into any projectiles. 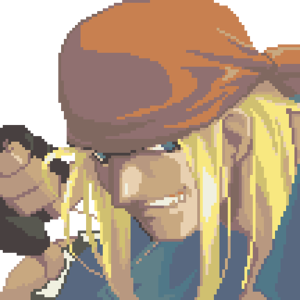 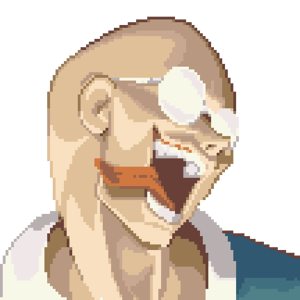 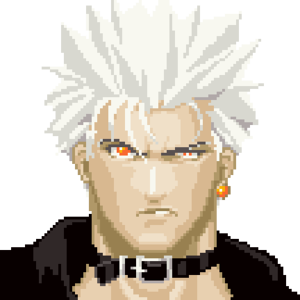 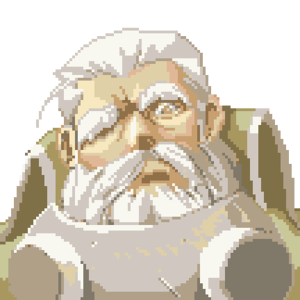 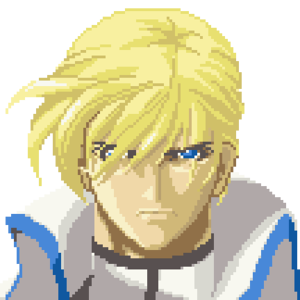 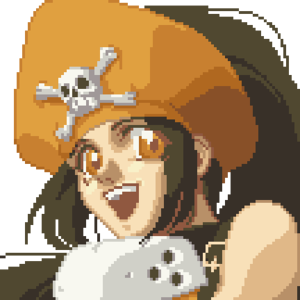 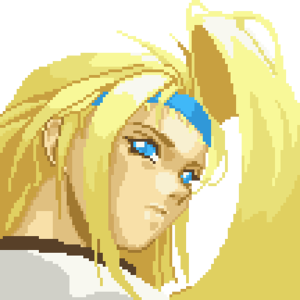 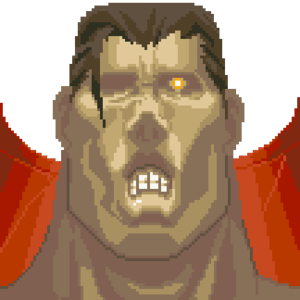 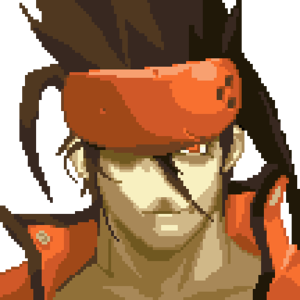 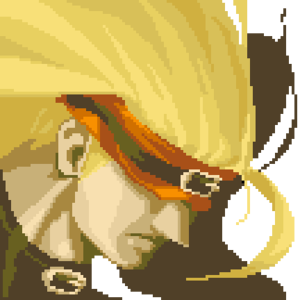 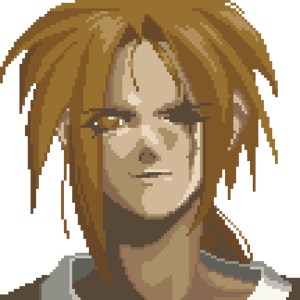 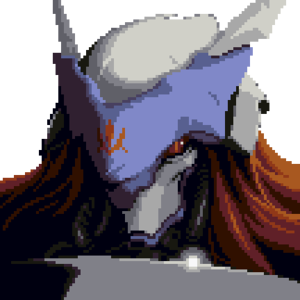 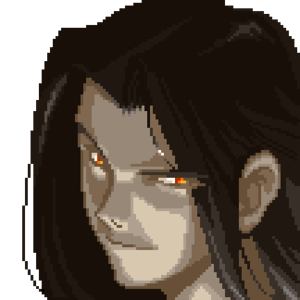