There are many different types of blocking, and each is useful for different situations. Correctly picking the right one for each situation is critical for survivability.

After blocking an attack, characters enters a state called blockstun where they are unable to do anything except block, Blue Psych Burst, or Yellow Roman Cancel. Both characters get pushed back varying amounts depending on the attack and type of blocking used. 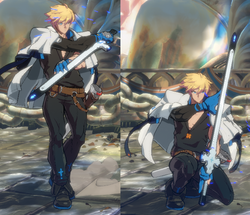 Hold any backward direction to block.

Normal blocking is the default type of blocking and is the most commonly type used.

When being pushed back by an attack, you decelerate slower from pushback while standing than you do while crouching. This means that during a blockstring such as close

> special cancel, you can push yourself further back from the opponent by stand blocking everything besides the

(if it is a low). Because of this, standing block can cause the opponent to whiff buttons, enabling a punish. On the other hand, crouching block is more useful when you're looking to disrupt their offense with a fast button, which is specially useful against blockstrings that move the opponent forward.

Hold any backward direction while airborne to air block

have a unique trajectory on air block, conferring more advantage than normal. 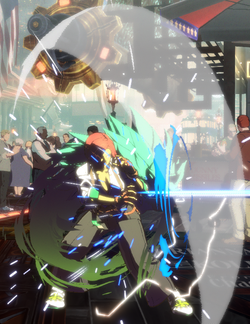 Begin blocking right before the attack connects. You will flash white.

The benefits of Instant Block are

While blocking, players can attempt an Instant Block at any point. Think of it as a mini-game: time your blocking to the rhythm of the opponent's hits.

Since faster attacks generally have shorter range, Instant blocking an opponent's attack often creates new punish opportunities. Instant blocking might even be required to punish certain attacks that are at frame disadvantage but cause too much pushback to punish under normal circumstances. 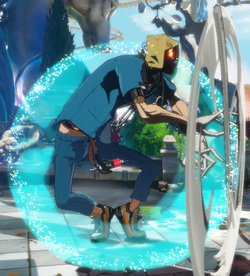 Powerful defensive option, but drains Tension as you use it!

Hold any two buttons except

A unique type of guard that gradually depletes Tension when used. Faultless Defense augments your block by giving it several special properties. Firstly, it increases pushback on block, making it useful to make space between you and the opponent. By using Faultless Defense early in the opponent's blockstring, the opponent will be pushed back enough that later attacks will miss, allowing you to punish the opponent's whiffed attack or disengage. When in use, Faultless Defense also prevents the R.I.S.C Level from increasing and nullifies chip damage. This is essential for survival in situations where chip damage runs the risk of finishing you off.

Keep in mind that you don't have to hold two buttons for a long time in order to use Faultless Defense effectively. It's also possible to press the buttons briefly - slightly longer than a tap - just before the opponent's hit connects. By doing this, you can let go of Faultless Defense in between the hits of an opponent's blockstring, allowing you to save some Tension. This requires some precision though, so it will require practice. 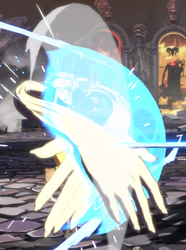 The benefits of Instant Faultless Defense are like a combination of both Instant Block and Faultless Defense, minimizing threats from the opponent and keeping them away from you without giving up any space yourself. 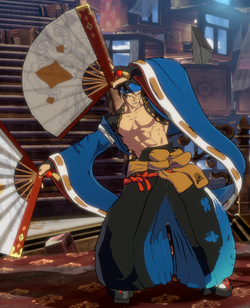 You can still block during this, but you can't Yellow Roman Cancel.

Guard Crush is a unique animation attributed to certain attacks. In Guard Crush state, you can only block or Burst, but it is not a blocking animation in and of itself, so you can be hit during it if you release the block input.

Unlike blockstun there is no 5 frame throw invincibility after recovering from a Guard Crush.

Getting hit during Guard Crush state results in an invalid combo.

When a player crosses behind their opponent, for 3 frames the opponent is able to block in either direction, forward or backward. This means in some cases a move that changes sides doesn't functionally need to be blocked correctly to avoid being hit. Moves that hit on crossup are behind the opponent for at least 3 frames before hitting.

Additionally, when an opponent is in blockstun they will automatically block attacks, except for needing to block High or Low. Because of this, an opponent locked in a true blockstring cannot be punished with a crosse-up. This does not apply during Guard Crush, which will not prevent an opponent being hit unless they hold to block, however crossup protection still applies. 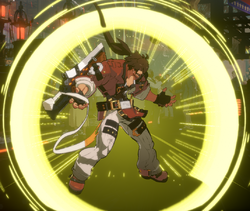 Turn the tables with this powerful defensive option!

) simultaneously while in blockstun to perform a Yellow Roman Cancel (YRC). Costs 50% Tension.

However, Yellow Roman Cancel is -16 on block and leaves your character in Counter Hit state during its recovery frames. Sharp opponents can block it on prediction and punish it heavily. Make sure to vary when you go for a Yellow Roman Cancel to avoid becoming predictable. In addition, the hefty 50% Tension cost must always be taken into consideration. Said Tension could be used for Overdrives or extending combos or blockstrings with other types of Roman Cancels. Practice utilizing all of your defensive options so as to not end up over relying on Yellow Roman Cancel and burning Tension too quickly. 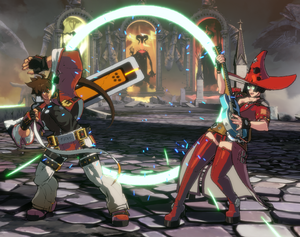 If you input a ground throw or air throw within 10 frames of the opponent's throw connecting, neither character will receive damage. Instead, both characters will back off and recover in 31 frames. After an air throw clash, both players recover in-air and regain their air actions.

+ any other attack button to perform a Psych Burst. Costs a full Burst Gauge.

A powerful defensive option that can be used in a variety of situations at the cost of a full Burst Gauge. Upon activation, your character releases an invincible shockwave that knocks opponents away. Bursts can be used at almost any point in the match, including when you’re in blockstun or hitstun. This allows Bursts to function as both a combo breaker and as a way to challenge the opponent’s pressure. The Burst Gauge refills very slowly over time, so it can be a good idea to use it early in a match to break out of a powerful combo, such as a Counter Hit combo. This will allow you to spend the rest of the round recharging it, making it more likely to have another opportunity to use it again later in the match.

While Bursts are very powerful, they are far from infallible. The activation shockwave is not instant, so sharp players can predict incoming Bursts and punish them heavily. A common method of doing so is canceling attacks with jump cancels or Roman Cancels, then blocking the Burst and punishing the recovery. Because of the risk associated with it, you should vary the timing of when you go for Burst to avoid becoming predictable. In addition, the activation shockwave's range is limited. Characters with long ranged attacks, such as

Ramlethal, have access to Burst-safe combos and blockstrings that allow them to punish Burst if you go for it or continue their offense if you don’t. Against players that employ these tactics, you will need strong match-up knowledge to survive. Lastly, keep in mind that Burst cannot be performed while your character is stuck to the wall, being thrown, or being hit by an Overdrive.

Depending on a character's current state, the Burst will be either Blue or Gold. 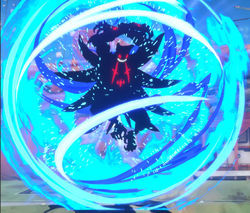 Can be used while blocking or while being hit to deny the opponent damage and reset the pace of a match. 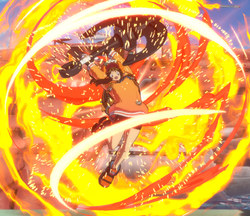 Can be used while in a neutral state. Used to gain momentum, press an advantage, or on wake-up as a reversal.

Bursts can be temporarily disabled even with a full Burst Gauge. A red X will cover the Burst Gauge during this time. 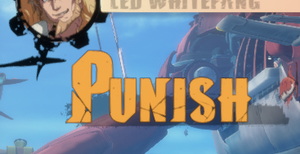 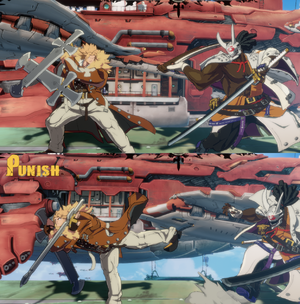 Dodging the opponent's attack, then punishing them is a common tactic.

Sometimes "PUNISH" will appear on the HUD. This means that you hit the opponent during the recovery of their attack.

Attacks are punishable on block if the defender has enough time to hit the attacker after blocking the attack. Each character's frame data lists the amount of time to punish an attack on block; this is known as frame advantage/disadvantage. An attack that is -11 on block means that the defender can use an attack that has start-up 11 frames or faster to punish the opponent. Of course just because an attack is fast enough does not mean it can reach the opponent, so knowledge and practice are still necessary, even when a player knows the numbers. Instant blocking an attack earlier in the blockstring will keep the defender closer to the attacker and make attacks easier to punish.

While the concept of punishing exists in all fighting games, the HUD indicator is helpful for learning while mid-match. Did you actually punish the opponent's attack or were they just not blocking? Now you can know for sure.

One caveat to this is certain attacks are in Counter Hit state during their recovery, such as Ky's Stun Edge. In these cases, the HUD will show COUNTER instead of PUNISH.

Reversal is a term used to refer to either performing an action on the first possible frame after recovery or actions that would be used in such a context, such as moves with invincibility during start-up. The HUD displays the word "REVERSAL" when performing a special or Overdrive immediately after recovering from blockstun, hitstun or knockdown. This message is useful to tell when an attack is performed as fast as possible. Please note that there are two different reversal messages depending on whether the reversal is performed out of stun or after waking up.