A Sector Seven scientist turned insane blob after exposure to the Boundary. Now with thousands of insects inside of him, he haunts the city of Kagutsuchi in search of the Azure. In terms of gameplay, Arakune is a very awkward character with awkward attacks, awkward movement, and an awkward playstyle. The main goal is to put your opponent in a "Cursed" State and deal big damage along with extremely safe block strings, cross-ups, mix-ups and even an unblocklable here and there. This is the offset to a very weak character without curse with lackluster pressure and mix-up, and mediocre and predictable defensive options.

Crimson is the system that calculates curse meter: how much is needed to curse an opponent, what attacks inflict how much curse meter (more details on this below), and how long curse lasts. During curse, Arakune can summon a variety of bugs that help his pressure, combo ability, and damage.

The Curse Meter is 6000F (10 Seconds) and each move that adds curse will add to this meter on hit or block (for half the normal amount) and will automatically start draining if it hits the maximum, commencing curse mode. During curse mode, releasing any of the buttons will summon a bug specific to that button. During curse mode Each bug has a cooldown before it can be summoned again (more details on this below) and Arakune cannot summon bugs when he is taking damage, in blockstun, teching, or activating Overdrive or Exceed Accel. Once the curse gauge depletes any further attempts to rebuild curse meter will be prevented until all summoned bugs are off-screen and any ongoing combos have concluded.

Upon activation the opponent will be cursed immediately with any existing curse meter, starting the curse gauge's depletion. While overdrive is active the curse gauge depletes at half the usual rate (even if curse started before going overdrive), extending the time the opponent spends cursed. Arakune's Distortion Drives will also apply more hits and do more damage. Outside of curse all Drive moves add double the usual amount of curse on hit and on block. Additionally, Zero Vector's curse clouds each build curse at double the normal rate.

Arakune is one of the characters who rely heavily on their Drive effects. Arakune's play is set into two different phases, pre-Curse and Curse. During pre-Curse, the goal is to curse the opponent, so it is essential to include or end your combos with a D attack (or a special attack that can serve as an equivalent) to gain curse meter. The curse gauge is set at 0 at the start of every round and has a maximum capacity of 60000.

Once the curse gauge reaches 100%, it's time to summon bugs, these bugs change the entire scope of Arakune's combo potential, creating a variety of options off of the simplest hits. Although powerful, in curse you are not invincible. All bugs vanish if Arakune takes a hit, and there is a cool down between summoning of the same bug. The fun stops when the Curse gauge depletes. Uninterrupted curse expires after 10 seconds. Do what you can during that time, with good execution, you'll be happy about the outcome.

Each bug is summoned by releasing it's corresponding button (A, B, C, D). Hold left or right during release to alter the bugs horizontal summoning position/trajectory. (See individual bug sections below for alternate trajectories.) 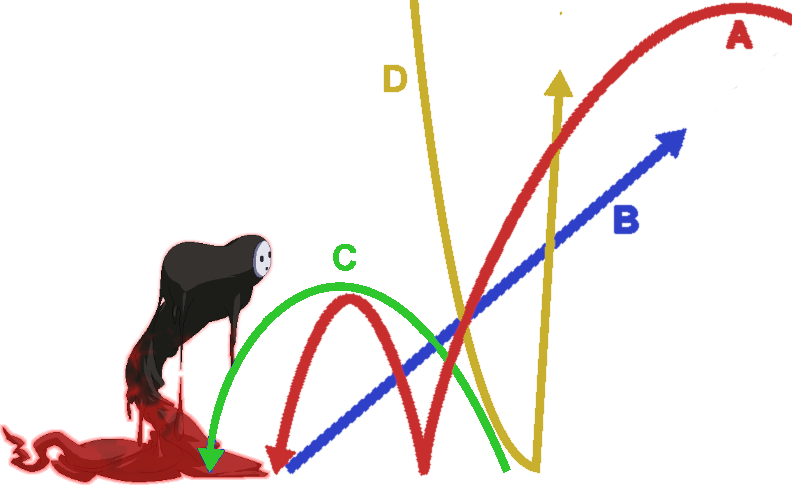 Tip: Bug trajectory is independent of distance to Arakune, use screen landmarks such as lifebars and heat gauges to keep track of bug paths while moving.