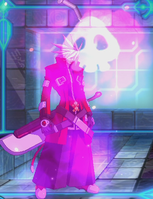 Ragna hitting Carl and Nirvana with 5B

This leads to visually strange situations like Ragna's 5B hitting Nirvana, then a moment later, Carl jumps into the active frames and gets hit. This is further compounded by the fact that hitstop only applies to the attacker and the target, thus allowing the attack to hit the unaffected character with the active frames plus the hitstop frames!

This even applies to projectiles like Jin's Hishouken, but since the projectile will shatter the instant it touches Nirvana or Carl, this effect is much harder to take advantage of. 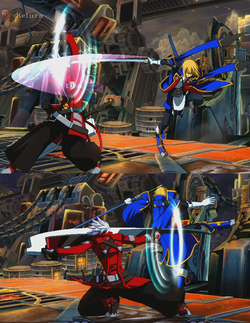 When your character is invincible and he goes through an enemy attack, you may notice that a white circle will appear. This is to show that the character was invincible.