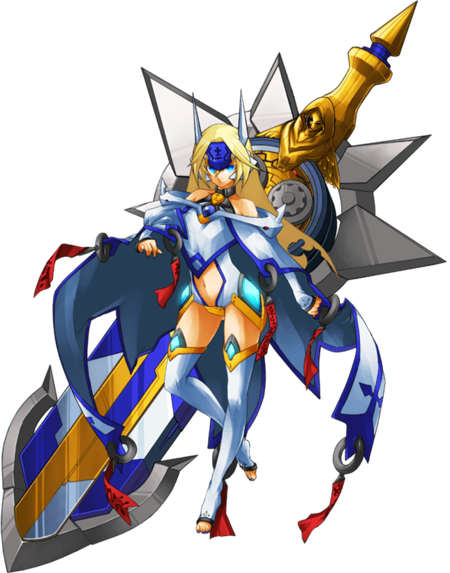 It's a shame her fashion sense isn't shown on the battlefield.

This is the true form of Noel Vermillion after fusing with the True Azure Grimoire through Terumi's ambitions to destroy the Master Unit "Sankishin" using the sword, Kusanagi, and erase the world from its existence. Due to his influence, she believes that the world is filled with nothing but lies. µ12 is a dynamic zoning character with high damage output and capable defensive tools.

Drive: Steins Gunner
Steins Gunner projects an energy node (Stein) to the targeted location. Steins have a heating period before they fire, and will cease heating if µ receives damage or blocks, however once the stein has finished heating up, they will fire and cause most attacks to trade/lose. Steins can also be Charged by holding down the Drive button while projecting the Stein. Charged Steins take longer to heat up, but have much more powerful beams. Steins are also used for two of µ's special attacks; Totsuka and Habakiri, which will be detailed later.

An important note is that all Stein actions are Special, Drive and Jump Cancel-able on whiff; Air Steins also Airdash Cancel-able on whiff in addition to the other options. Mastering whiff-cancel timings and varying your options is very critical to succeeding with the character overall. 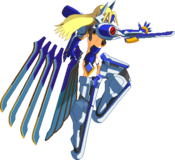 Watch out for the sharp part.

µ's 5a is most effective as a fast ground-to-air poke, and as a normal to stagger her interior pressure, setting up throws and frame-traps. Because of µ's excellent proration, even 5a starters can lead to high damage combos.

2a in general is a slightly more effective tool to use in neutral against grounded opponents, but 5a's higher hitbox makes it the choice against airborne opponents..

Too bad it whiffs on recoil.

Excellent pressure and punish tool, leads to enormous combos nearly anywhere on the screen with meter; landing this move on a cornered opponent almost always seals the round with a kill.

The weakness of 5b is that the recovery and hitbox are far from amazing. It's dangerous to use as a poke, and sub par to other normals for hit confirming due to 5b whiffing on crouching opponents at certain ranges. That aside, everything else about 5b is quite impressive, and should be used constantly in pressure.

5b's true strength is the number of options it has following it, and leading into it. The move gatlings into nearly all of µ's other normals, and can be late chained out of at almost any time. Combining this with varied use of Special Cancels, Drive cancels and Jump cancels lead to this move being critical in pressure and mixup.

It feeds on your tears.

Immense normal, and one of the fastest for the amount of coverage, 5c is one of the superior pokes in the game; a very deadly tool when implemented correctly.

5c's failing is in pressure. Though the move is not very minus on block, gatling into 5c removes the threat of µ's mixup via 6b and throws, limiting it to frametraps. Opponents who understand the µ's normals can see 5c as a queue for the essential end of her pressure. However, once again this is a normal where a varied use of Late Chains, Special and Drive Cancels will keep you mobile and unpredictable, forcing the opponent to respect your space.

This move is the go-to normal for combos, as the damage:proration ratio is very very good. It leads to huge damage on normal hit in the corner, or counter-hit midscreen with meter. Because of the enormous hitbox, it's easy to confirm into 5c to pick up a full combo as soon as possible after landing a hit.

And important note is the extended hitbox on 5c, as displayed in the image to the right. The extended hitbox discourages using 5c as an anti-air or as a close range poke, but feel free to cut your opponent to pieces at maximum range.

Probably the move you will be pressing the most.

Staple crouching jab. Almost identical to 5A in terms of characteristics. Unlike 5A however, 2A is able to hit any crouching hitbox. Can late-chain. Throw cancellable.

The ability to cancel into a throw makes this move a dangerous pressure tool when used correctly, even with a -2 frame advantage. It can also be used for many frame trap setups, one of the most common being 2A > 2C. There is an option select to punish forward rolls and DPs that consists of 2A 2C as well.

The key feature to the pressure ability of 2A is its ability to late-chain into itself and other moves. The late-chain into itself allows you to be a lot less predictable with your blockstrings, and can level up your pressure from a character whose pressure is only sub-par. Its ability to cancel into throw also allows for deeper mind games. A common example would be causing throw reject miss against the Throw Option Select, though other uses for its cancel into throw can be found.

Keep in mind that this move can easily be disrespected when used incorrectly.

Overall, Mu's most effective and well rounded normal. Excellent hitbox, startup, recovery in almost every situation. With the character's ability to convert any hit near the corner into very impressive damage, this normal is her most consistent origin of damage output.

2b is incredible. It excels at everything from poking to use as a crossunder normal, and its liberal application should never be underestimated. Due to the excellent hitbox and speedy startup, it will beat out tools that many characters rely on in neutral, though it requires a bit of dashing momentum to get maximum coverage.

May be Mu's biggest anti-air, but it's not the best in every situation.

One of Mu's anti-airs, the hitbox is very big, the invulnerability to air moves is long (frames 6 to 16), and has the biggest vertical range on her anti-airs by far. Very easy to hitconfirm into decent damage on counterhit by gatling into 5C. However the huge recovery makes it very punishable on whiff, by an opponent who double jumps to bait it, so avoid getting predictable with this.

Also very useful in ground blockstrings because if your opponent is expecting you to gatling into 5C, you can instead special cancel into a projectile (that varies according to the situation) to restart applying your pressure.

Another of Mu's anti-airs. Invulnerable to aerial attacks from frame 5 to 14. Forces aerial state on opponent on CH. Faster than 2C, and good horizontal range, but not very good vertically. It also recovers faster than 2C so it doesn't get baited as bad with double jumps.

In order to use Mu effectively it is necessary to learn when to use which one of her anti-airs, because together, they cover very many possibilities.

6A is good in blockstrings, because most players don't use it often, so the opponent may be caught off guard not knowing what it can gatling into.

Mu's only overhead. It has a very fast startup compared to other characters' overheads, and combined with lasers and explosions, it can be very hard to see. However, it's absolutely terrible on whiff because it lasts so long, your opponent can punish very heavily, so you have to know when you can use it. An advantage of it being a 2 hit move, is that you can rapid cancel and block if your opponent bursts between the two hits. It is noteworthy that both hits are overheads, so a very effective mixup is to rapid cancel after the first hit and use 2B which hits low instead.

Another way to use this move effectively, is by combining it with lasers to keep your opponent in blockstun during the startup. That way, because there is usually a frame gap, opponents will often try to DP 6B's startup, but if a laser is keeping them in blockstun, the 3 position will have them crouching and therefore they will get hit.

Another few things to note are that it has foot invulnerability between frames 8-23, and the CH state from hitting with only the second hit has additional hitstun. This move deals very good damage and should be used at least once if possible in every combo, but not twice, because it has repeat proration.

This move can be very lethal for your opponent, but for you as well. Its most practical use is to punish other zoners using moves with slow recovery at a certain range from you (for example, Rachel summoning George XIII). On CH it leads to a fatal and a very damaging combo, with almost guaranteed corner carry. On whiff, the recovery is so long that you will be the one eating a deadly combo, so do not abuse this move. The move does have a minimum range as well.

This move should be used in every combo because it deals very good damage and has very good P2, but it also has repeat proration so only once per combo. It will almost always combo from 5C CH, 5C aerial hit, and any grounded string on a crouching opponent from 5C or 2C. It will whiff on certain characters like Litchi sometimes because they are too close (during a combo), or on many characters if you hit with the maximum range of your 5C.

This move can be used in blockstrings as a frame trap or simply to push your opponent farther away and giving you even more blockstun to drive cancel or special cancel into something. However make sure you do cancel it into something on block because if not you can get punished out of its slow recovery.

This move is mostly used as a block string ender outside of combos, because it can be cancelled into from most of Mu's normals, and is jump cancelable on block. It also hits low so it can be used for mixup from a blocked 5B/6A if you have already used 2B in your blockstring. This is especially effective in the corner, because you can get very decent meterless damage off of it. It is almost always used in midscreen RC combos on standing opponents.

Can be used as a meterless combo ender in the corner, but is generally inferior to stein setups. Doesn't have many uses at neutral, but is good for punishing moves that are vulnerable only to lows (Tager's voltech charge, Tager's 6A, Litchi's Ittsuu), because on counterhit you get a full combo.

Quick startup makes it good for an air-to-air battle.

Has a crossup hitbox. 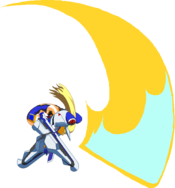 File:Mu5D.png
Only use is for combos.

File:Mu2D.png
Only use is for combos.

File:Mu4D.png
Only use is for combos.

File:Mu6D.png
Only use is for combos.

File:Muj5D.png
Only use is for combos.

File:Muj2D.png
Only use is for combos.

File:Muj4D.png
Only use is for combos.

File:Muj6D.png
Only use is for combos. 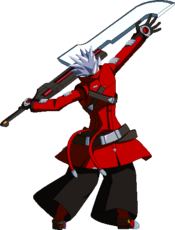 File:Rmu236a.png
The quick 5-frame startup allows this move to serve as a safe and effective anti-air. 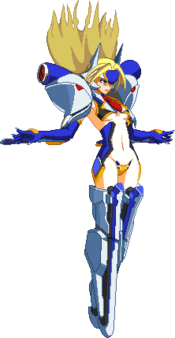 File:Mu63214c.png
The quick 5-frame startup allows this move to serve as a safe and effective anti-air.

Gonna get your primers!

File:Mu236d.png
The quick 5-frame startup allows this move to serve as a safe and effective anti-air.

File:Mu214d.png
The quick 5-frame startup allows this move to serve as a safe and effective anti-air. 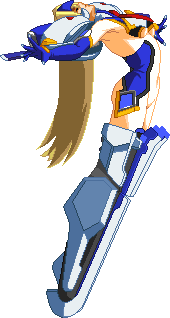 It does have high production value.

Kusanagi - Sword of the Godslayer (222D)