Noel is primarily a point focused character with a niche set of assists. It is important to note that creating a team with Noel will likely compromise the other character.

The second point to consider for Noel on point is how well the assists enable Noel’s offense. As long as the character has a long blockstun assist and has a way to deal with being pushblocked, Noel can take advantage of it. Another point to consider is the recovery of these assists. The longer the recovery on the assist, then the easier it is for the opponent to create a gap in Noel’s offense with pushblock.

An extremely high damaging assist. Looping Noel 5P four times in a combo will almost always lead to 10k meterless damage. Noel 5P on hit also has a long duration, allowing for the partner to reposition and do any character-specific setup.

Long startup, but also has long blockstun and can pull the opponent out of the corner. Pushblocking Noel 6P will push both Noel and the gun away.

Fairly fast assist, but it only covers the ground.

Noel SHOULD NOT be used as an anchor. She has very little use for Resonance Blaze and is incapable of getting good damage off of stray hits outside of the corner. 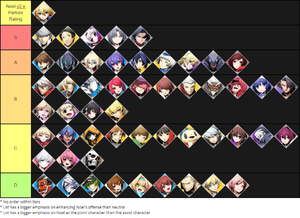 Noel is primarily a close-range character with multiple moves that can close the distance between her and the opponent. While Noel's neutral is lackluster, her offense can be relentless and not give the opponent time to think.

Noel’s mobility should be used to weave in and out of the opponent’s effective range, whether the mobility comes from her fast movement speed or from her attacks. While not as far reaching as other moves in the game, 5A is a good normal to use as a poke due to its hitbox and relatively fast recovery. 2C is also a very strong long ranged poke due to the distance traveled, but be careful with whiffing 2C as there is a noticeable amount of recovery if it is not cancelled into another move. 2B is useful if the opponent is in the air around normal jump height to catch them not blocking. d.5B is a strong, yet risky, move to rush in towards the opponent.

Her approach to neutral can widely change when taking assists into account. Noel will appreciate any type of projectile assist to help her approach, but be wary of any assists with a longer startup as Noel will have a hard time keeping the assist safe. If the partner does not have a projectile assist, then a fast, forward moving assist can take the place of a projectile, but carries a higher risk of the assist getting hit. Any assist that can take control of the space above Noel will be a boon as Noel has a difficult time dealing with opponents approaching above her.

Noel has very weak solo pressure due to pushblock and not being able to safely keep up her pressure. Noel can attempt to air dash back in from a jump cancellable move or use d.5B/d.2B if available, but each of these options has a large enough gap for the opponent to react and punish Noel. Noel can also stagger her A normals to attempt to bait a pushblock from the opponent, but is still a weaker option overall.

Noel’s solo and same side mix-ups are very basic. Her only overheads outside of drive are 5C, j.A, and j.AA, so there is very little threat for the opponent to block standing if Noel is on the ground. Noel can also go for tick throws from 4A, 5A, 5AA, and 2A. When in the air, Noel’s solo options open up a little. She can do an empty jump low, delayed air dash j.A, left-right mix-up with j.B, or cancel into one of her drive moves. When in drive, Noel can go for a high-low mix-up with d.5C and d.2C, frame trap the opponent with the natural gaps in her drive moves or delaying the drive moves, or bait pushblock by ending drive early.

When in a sandwich situation, Noel can be more creative with the mix-ups. For an immediate mix-up, Noel can use Active Switch with j.C or 236C and give the new point character time to confirm the hit. Noel can also use the natural gaps in her drive strings to create left-right mix-ups on top of any other options from drive.

To keep the mix-up safe, Noel has some options available with buffered Active Switch. Noel can use the natural gap between 5AA and 5AAA or use 4A/5A/5AA to 5B/2B/2C for a left-right mix-up while still keeping the partner safe from most reversals. To perform a buffered Active Switch, a move along with D needs to be inputted during the hitstun/blockstun of a normal. The trade off with this method is that the opponent has more time to react and properly block.

If the opponent is in the corner and does a back tech, Noel can use 5B to steal the corner. This is not a safe mix-up, but can be done if the opponent has been conditioned to block on their ground tech.

In general, okizeme consists of either a meaty attack, whether done by the point character or assist, or a safe jump setup.

It is easiest to set up a meaty attack with Noel after ending a combo with Bloom Trigger, 214B, or 236B. These enders will usually make the opponent perform a ground tech. After performing one of the enders, time an assist call so it will connect with the opponent as they recover. If done properly, then it is possible to visually confirm that the opponent is blocking and run a mix-up or continue pressure. The benefits of using an assist to meaty the opponent over using Noel is that it is DP safe and the opponent is forced to deal with any mix-up you choose.

Noel can also use 4B as a safer meaty attack. A properly timed 4B can bait DPs while still hitting the opponent on their recovery. It beats nearly all DPs and d.5B/d.2C can be done on reaction to a Distortion Skill to attempt to evade it.

For all safe jump setups, an assist can be called along with the normal to make it easier to hit confirm or have greater frame advantage on block. Also, the higher the opponent is before the knockdown, the frame advantage will usually be higher.

NOTE: It is generally NOT advised to do a safe jump setup against characters with “guard point” reversals, counters, and/or command grab distortion skills.

The 6395A+B input will do the following:

3. 5 - Return the position to neutral, needed for the A+B macro to follow the tech direction

Outside of drive, Noel does not present much threat in her blockstrings. An important thing to know is that there is a frame trap between 5AA and 5AAA. This can catch opponents who are trying to mash out of pressure, though it is also possible for the opponent to use a Reversal Action or Distortion Skill in the gap. Also be wary of the distance between Noel and the opponent as 4A may whiff on opponents at a distance.

Noel 236B is +0 on block. While she is not plus and the opponent can catch the startup with a fast enough button, it can still be used to reset pressure once in a while.

Noel normally only has access to her drive moves after using one of the following drive starters: 4B, 5B, 2B, and j.B. But if Noel is in the air, she can land cancel j.B to bypass the drive starter and go straight into her drive normals.

To perform her drive cancels, the move must be plinked (pressed in rapid succession) from j.B before Noel lands. If done correctly, there will be no animation for j.B and the intended move will come out instead. This can also be done after using an air normal, mainly j.A.

To practice her drive cancel:

If an opponent keeps mashing DP to beat you in Drive, you can check the DP-punish chart for your opponent's character and options how to beat it: https://docs.google.com/spreadsheets/d/1HHfjKC8Ex9LkDdbp5UlDl6pH15wlL0U8NFYHpWkI-9I/edit

In general, approaching from the air is a good tactic against Noel. She does not have any drive normals that have head invulnerability and her anti-air is very lackluster. Be careful when approaching Noel with air dashes as that is one of the few angles that her anti-air can cover.

When approaching Noel on the ground, take extra caution when throwing out attacks as 4B, d.5B, and 2B in some cases can cause the attack to whiff and be punished. The best option is to use a long, disjointed low attack if possible since 4B and d.5B will lose to this option. The danger to this option is that Noel can use 2B to dodge the attack and punish instead.

Caution should be taken when trying to zone Noel with projectiles. 4B, d.5B, and 214C are projectile invulnerable and can be used to quickly close the distance. If Noel is near fullscreen, then zoning Noel should be safe. Once she is able to close the distance, zoning becomes really unsafe depending on how fast the character can recover from whiffing a move.

If Noel is blindly using her drive normals to force an approach, then the easiest way to deal with it is to jump and land with an attack directly above her. Noel herself will not be able to stop this attack as she does not have an attack that hits directly above her. Her Reversal Action will have a high chance of missing as well because the hitbox is in front of Noel and she also slightly moves forward when using it.

When blocking Noel’s drive pressure, it is important to know that there are gaps in most of her options outside of a few instances. It is possible to exploit this gap with a reversal, but be careful as Noel can dodge through some reversal options with specific strings. The safer option would be to pushblock Noel away in reaction to blocking a drive normal and jump. Noel will be able to close the gap from a pushblock with d.5B, but she will not be able to reach characters who jump when she is already using drive.

The following list are common moves that Noel will use with the appropriate counters.

Check the following document for a more in-depth explanation of her weaknesses and how to exploit them: https://docs.google.com/document/d/1rLlu9MqITupGqj9eL1X_QAhgybKyfKZ_Jhcny8uZy_w/edit