Each attack in the game has an attribute. Attributes are broken up into two broad categories: physical and projectile. These attributes interact with each other to trigger certain effects like invulnerability and guard point.

Physical attribute in this game are broken up into 2 groups: head and body. As a rule of thumb, standing and crouching attacks are body, while jumping/airborne attacks are head, but that is not always the case. Note that attack attribute is completely independent of how the attack must be blocked.

Strike
Strike attacks are the most common in the game, with each having a clash level. Attacks of the same clash level will clash with each one other. Strikes of different clash levels won't clash, but in situations where they would trade, the strike with higher clash level will gain full invulnerability for as long as their hitboxes and hurtboxes overlap, effectively winning the exchange.
Clash level is often identical to the attack's attack level. Unique clash level will be noted in characters' full frame data.

Throw and Hit-grab
Throws are attacks that can not be blocked but have some restrictions such as not being able to hit crouching or airborne opponents. While hit-grabs are strikes with special attack animation playing out on hit.
Throws and hit-grabs share a unique "clash level": they cannot clash, and will always win against strikes on trades. If two throws/hitgrabs trade, the character that landed the last attack (blocked or hit) will win the exchange.
Throws can not hit assist characters and on hit cause both the attacker and defender to become temporarily invulnerable to other attacks while the attack animations play out.

Projectiles will have their hitboxes disable for the frame that they clash, even if they have different durability levels.

In DBFZ, projectiles of same durability will often extend their own active frames on clash to ensure that they'll cancel each other out. Such as Goku (Super Saiyan)'s Super Kamehameha (10 hits) will always cancel out with Vegeta (Super Saiyan)'s Big Bang Attack (1 hit).

Ki Blast
Ki Blast is an extra property of some projectiles with a few unique traits:

If a Ki Blast connects exactly 1f after the opponent escapes from another blockstun, its blockstun won't be cancelable.

Assist Characters
Z-Assists and various attacks like Android 18's Support Attack also have their own physical and projectile attributes, however certain moves with guard point will treat these attacks as projectiles, disregarding their actual attributes.

Guard Point and Armor
Guard point (also known as autoguard) allows attacks to automatically guard against other attacks, while armor allows you to take the hit while still carrying through the attack. As a rule of thumb, guard point and armor are weaker than invulnerability because an attack that hits guard point/armor is considered "blocked" and the attacker retains all "cancel on block" options.
Most of the time, these attacks only have guard point/armor against certain types of attacks. For example, Android 16's 5H only has armor against mid and high strikes, but not lows.

Attack level determine a standardized amount of hitstun, blockstun, pushback, etc. an attack will have. As a general rule, attacks with the same Attack Level share the same sound effects and graphical effects.

There are numerous exceptions that override these default values and even have extra properties like knocking the enemy into the air, wallbounce, groundbounce, etc. These will be noted in the frame data.

A counter hit typically occurs when you hit an opponent who is in the startup of their attack. On hit, the announcer will say "Counter" along with a HUD message, the attacker will gain 50% more Ki on that attack only, and there is no additional benefit to counter hits compared to normal hits.

Yamcha and Krillin getting hit by Cell's 5M

This leads to strange situations like harder conversion during a Happy Birthday combo (a combo that hits more than one opponent at the same time), an attack can hit the main character, then a moment later, the second character who is slightly behind gets hit by the remaining active frames. This is further compounded by the fact that hitstop only applies to the attacker and the target, thus allowing the attack to hit the unaffected character with the active frames plus the hitstop frames!

This also applies to projectiles like Goku's Kamehameha and Piccolo's Homing Energy Blast, but the later case is more difficult to take advantage of since the projectile will shatter the instant it touches an opponent.

If two opponents are in range of your attack, they are hit on the same frame.

A lot of moves will change their properties depending if they whiff, are blocked, or hit. These changes can only be triggered by the your point character, upon hitting the opponent's point character, and must either start or be done inside a combo:

Enabling or disabling specific followups
Ex: All j.L on air-to-air hit will enable j.LL. Majin Buu's Dive Bomb will only trigger its ground splash part of the move if the dive part whiffs.
Automatic followups
Automatically perform extra attacks, these attacks are still cancelable.
Ex: Cell's Perfect Attack, if the opponent is hit by the second hit, he will do a third hit.
Cinematic sequences
Either automatically do extra attacks, or completely change the effect of the move does the instance it lands.
During a cinematic, both players become invulnerable to all other attacks, and the animation cannot be canceled until after it's finished.
Ex: Frieza's 5LLL, on a cinematic hit will do 1000 damage companioned by an explosion attack, but upon hitting Z-Assist it will only do 400 damage and merely knock them away.

All three of these properties aren't mutually exclusive, going back to Cell's Perfect Attack, the M version on block or hit will automatically do the second hit, if that hit lands he will do the third hit, and finally if that one lands it can be a cinematic one. 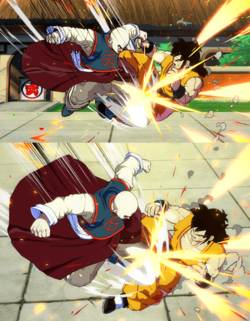 The "Smash!" prompt appears upon hitting with 5LLL, the universal cinematic attack

Cinematic version of attacks typically triggers immediately on hit and have higher damage or stronger properties, with some cinematics having stricter trigger conditions like only triggering on air-to-air, having to be canceled into from another move, etc.

During a combo, the game will keep track of which types of cinematic you've used and either enable or disable other cinematics from triggering. This is colloquially known as the "Smash" system and is the meat of DBFZ combo structure.

There are two main types of cinematic attacks, usually distinguished by their common effects:

On top of different types, each Smash attack can also be described as having limited number of times they can trigger per combo:

While most attacks only have one Smash property, there are attacks that have more than one Smash and will use the corresponding one depending on the conditions.

While type U and D don't interfere with one another, type U+ and D+ do. After hitting the opponent with a type type U+ Smash that's the first U Smash of the combo, any following D+ attack will trigger their Smash so as long as you don't re-enter neutral stance on the ground. Meaning:

Using a type U Smash move will prevent further U1 Smash, and vice versa with type D Smash. There are also multi-type Smash, for example: a Smash attack type UD1 on hit will prevent further usage of both type U1 and D1, however, it can only be triggered if neither type has been used in the combo.

Despite this, there are attacks that block Smash's usage despite not having a Smash version. The most common instances of this are attacks that "consume" U1, D1 Smash, and the U2 Smash of Vanish. This specific consumption of Smash is denoted by UDV, and is put next to the Smash type the move actually belongs to.

While ground bounce, corner bounce and corner splat can affect Z-Assists, wall bounce and wall splat cannot, even if they're put against the corner.
In most cases, a move's untechable time indicates the total amount of time the opponent can stay in the air. This means the higher you are from the ground or the further away from the wall/corner, the less time you have for any followup combos, as more of the untechable time is wasted on the opponent traveling to these surfaces and bouncing back.

Knockdowns
There are three types of knockdowns:

When an attack hits an object, both objects freeze in place briefly to give the attack the feeling of more impact. This effect is known as hitstop and can vary in duration, like SS Goku's 5L compared to his Dragon Flash Fist (236X). Hitstop helps with combo consistency because you can buffer commands like special cancels during hitstop and it will be executed immediately after hitstop ends.

Objects experiencing hitstop are frozen in place, but other objects on the stage are unaffected. For example, when Goku's projectile hits the opponent, Goku does not experience hitstop, only the projectile and the opponent do. From Goku's perspective, the hitstop the opponent experiences can be thought of as additional blockstun/hitstun!

When an attack hits an objects, both usually experience the same amount of hitstop, but this is not always true. Some attacks deal different amounts of hitstop on hit vs block, and on the attacker vs defender.

Amount of Hitstop
The amount of hitstop an attack deals depends on its attack level, but certain attacks can override these default values.
Getting Hit While in Hitstop
Hitstop does not confer any invincibility - your state carries over from what you were doing before. If you were invincible/hitstun/blockstun before hitstop, then you will still be in that state during hitstop. If you are hit while in hitstop, then the previous hitstop ends and the new hitstop begins.
Hitting Assist Characters
You and the assist will experience severely reduced hitstop.
Projectiles where the Attacker Also Experiences Hitstop
While very rare, some projectiles (like Gogeta's 5S) don't behave like normal projectiles and also put the attacker into hitstop