Walking
Hold either left or right to walk forward/backward. This is the slowest form of movement, but also presents the least risk.
Dash
To run forward, press

) in quick succession when on the ground
Backdash (Backstep)
To perform a backdash, press

Air Option
Air movement in Dragon Ball FighterZ (and most Arc System Works titles) work on a either/or system - you can either double jump or air dash, but not both. Doing either is called using an air option, and most characters only have one air option. Air options are regained once the character touches the ground, after Air Recovery or air blocking.
Jump/Double Jump
Press any of the upward directions to jump. All characters can also perform a double jump by jumping again while midair. Ground jumps have 4 frames of startup where you are still considered on the ground, are invincible to throws and Dragon Rush, can not block, and can cancel the jump startup into ground Special Attacks. .
High Jump (Super Jump)
To High Jump, start from

, then quickly press any downward direction, then any upward direction. High Jumps have startup just like normal jumps. They are used to create vertical distance between you and your opponent as well as to run away; High Jump over the opponent, then air dash away! Note that you retain all air options after a High Jump. Additionally, your character will change directions to face the opponent if you jump over them. In Dragon Ball FighterZ, you also maintain partial control over your horizontal movement during a High Jump; Hold

to influence your direction as you fall. You can continue this influence after attacks or double jumps, but not during them.
Short High Jump (Super Hop)
To Short High Jump, start from

). Short High Jump travels the height of a normal jump with the acceleration and character direction correction properties of a High Jump. Note you must hold the downward input until after the crest of the jump or it will revert to a normal High Jump fall speed. You may double jump after a Short High Jump, but you must re-input a downward direction after double jumping or your air momentum will revert to normal.
Air Dash Forward/Backward
While airborne, press

) to perform an air dash forward, and

to perform an air dash backward. Airdashes are used to cover large distances quickly, but they are vulnerable during startup.
A common tactic is to perform an air dash immediately after jumping in order to cover distance quickly and avoid ground attacks; in fact, this tactic is so common that it has its own name: Instant Air Dash (IAD). IADs are performed by pressing

) for a forward air dash and

for a backward air dash. The idea is that the jump includes a directional input that also counts as an input for the air dash command.
Super Dash
Press

to perform a Super Dash. This is used as a way to deflect small Ki blasts from the enemy while approaching the opponent, and is often used mid-combo or to punish opponent's recklessly attacking from fullscreen.
Super Dash can only be used once each time you are airborne, and is regained once the character recovered on the ground, after Air Recovery or air blocking. See here for more information.
Prejump
Jumps and High Jumps are not instantaneous - before going airborne, your character will enter a state called prejump, where you can not block, but are invincible to throws. If you are hit during prejump, you will enter standing hitstun.
Characters have different amount of prejump frames, but the rule of thumb is that the heavier/slower your character is, the longer the prejump. Exact values for prejump can be found in each character's frame data.

It is actually possible to cancel prejump into Specials and Supers, though for most characters is not used very often.

Landing Recovery
Some airborne moves have landing recovery like Goku's air Kamehameha. This is straightforward; upon landing you will enter a landing animation where you are completely vulnerable
What's unique is that even for moves that don't have a specified landing recovery - like most air normals, or just jumping, there is still a unique 3F landing recovery that disables certain actions for limited amounts of time.

Another quirk about landing in this game is that the frame before landing, you are considered grounded meaning you can be hit by ground Dragon Rush during the last frame of jumping and getting hit on the last frame will result in ground hitstun. 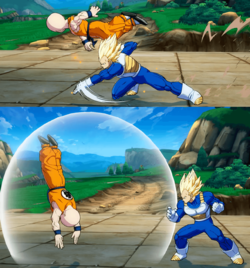 When your character is knocked to the ground, holding forward or backward will cause your character to flash white and flip off the ground. This entire animation is invincible (?? frames), and can
Hold Up instead to flip off the ground and recover in the air. This can be useful to opponent's okizeme by being airborne instead of grounded like usual.
Hold Down instead to lay on the ground for longer than usual (?? frames). This can be used to throw off the opponent's okizeme timing.
It's also possible to Hold Down to lay on the ground and then press up/back/forward to do a delayed version of the other recoveries.
Air Recovery (Air Tech) 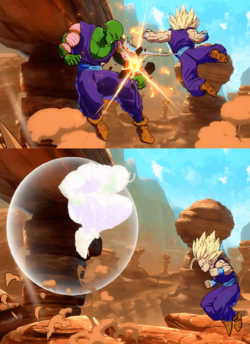 Hold a button and

to pick a direction

After getting hit while airborne, hold

to recover in the air. Holding Forward/Back/Up/Down will influence what direction you will recover in. The recovery animation is 20F and fully invincible.
Incoming after Snapback (Get Out of Here!)

+A1/A2 to Quick Z Change into a different character. This can be used mid-combo and is a great way to safely switch characters (assuming you can hit the opponent first!).
This can also be used from a neutral state, if holding the assist button feels too awkward to use.
Ultimate Z Change Cancel
Much like Super Cancels, you can cancel an attack into the super of one of your teammates. Normally, this is performed by canceling the point character's super into the teammate's super, similar to other 3v3 fighting games. This is performed by pressing either A1/A2 or

+A1/A2 during a Super Attack. However, in Dragon Ball FighterZ, it is possible to tag into a teammate's super mid-combo without performing a Super Attack with your own character by pressing either

+A1/A2 after connecting with a normal or special. Not all supers are available through Ultimate Z Change, and each character has preset supers that will be used. Specifically, A1/A2 and

+A1/A2 will use their preset Super Attack while

+A1/A2 will use their preset Meteor Attack.
Clash 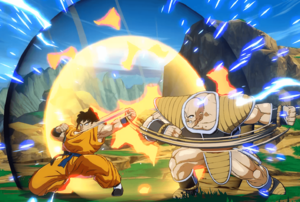 Clashes happen when two opposing hitboxes touch each other. During a clash each character can cancel the attack into any other attack at no cost, but you must be fast to react to it. Thus when clashes happen either the players are unable to react to it because it is unexpected, or they understand how the attacks interact well enough to intentionally cause a clash to cancel out the opponent's attack, then retaliate with their own!

This technique is especially useful for runs because it gives your attacks more range for free; by buffering both an attack and a run, you will attack as soon as possible while sliding forward! This technique is useful for linking together combos as well as punishing things after blocking. In fact, some combos rely on this property to link a running 5L/M/H/S or else the combo wouldn't work. 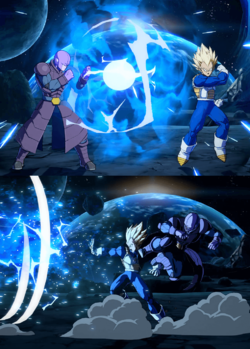 You can easily react to Supers...

During attacks that freeze the screen briefly (such as Vanish Attacks and most Supers), you can input commands and they will be executed immediately after the super freeze ends. This means that provided you are not in the middle of an attack, it is trivially easy to react to these attacks from the opponent attacks with an attack of your own.

Moves With No Startup After Super Flash 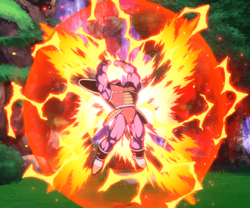 Some moves are special: they have no additional startup after the super freeze. This means that super freeze buffer is useless against these supers because the attack will already be active immediately following the super freeze - you can think of the superfreeze as just a formality, the super has already become active.

Sparking Blast is a prime example of this; you must already have some way to avoid the attack BEFORE the super flash or else it will be too late.