This Dynamic! hit (5LLLLLLL) won't work if there's any delay between 5LLLL (automatic Super Dash) and 5LLLLL (j.L), any other delays will do. 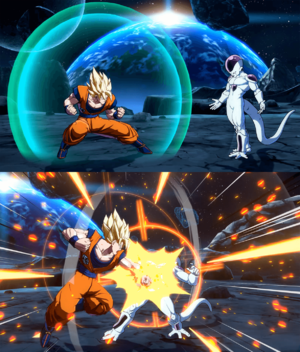 Press L+M to perform a Dragon Rush. Dragon Rush is a short-range unblockable attack that has some restrictions in place: 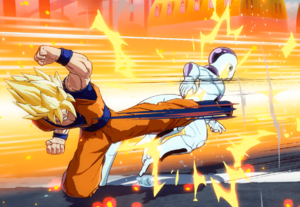 Like Dragon Rush, command throws also follow the same restrictions in regards to when they can and cannot connect. Some throws can even hit both grounded and airborne opponent, but cannot hit crouching opponent.

Almost all throws can be combo'd into. With a few exceptions like Goku (SSGSS)'s Super God Shock Flash which can only combo if the opponent is in grounded hitstun, or Android 16's Last Resort which cannot be combo'd at all.

Press H+S to perform a Super Dash. Super Dash is a very useful tool that does two things: quickly approach the opponent and extend combos. 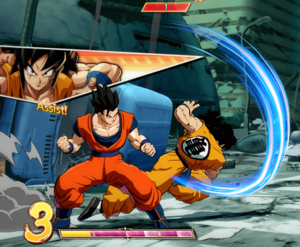 When a special move has L/M/H variants, the H version costs 1 Ki Gauge and is typically a better version of the special. They usually allow for extended combos or offer other unique utility that the other versions of this special do not have. For example, the H version of Vegeta's Super Dash Kick launches the opponent high into the air, allowing for follow-ups afterwards. As for utility, the H version of Tien's Volleyball Fist is a command throw, unlike the L and M versions, which are strikes.

+L+M Meteor Attack. Noted exceptions to this rule are Vegeta (SSGSS) and Gogeta (SSGSS), who perform their Galick Gun and Big Bang Kamehameha ( 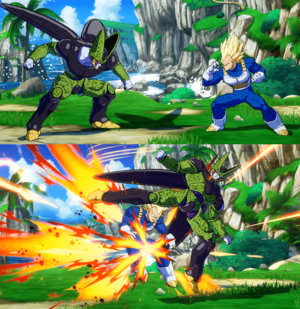 Vanish mainly serves three purposes: as a combo extender, and as a punish tool, and as an escape tool.

Combo Extender
Vanish can be canceled into from most attacks, and when used in the middle of combo, will cause a severe wall bounce that bounces from anywhere on the screen, giving you time to land another attack. This wall bounce works once per combo regardless of any moves with Smash property previously connecting, but comboing off a Z Assist, Z Change, Guard Cancel Change or an opponent already in a wall bounce directly into Vanish will not grant a wall bounce. Also, Vanish must be canceled into from a connecting hit in order to wall bounce, as canceling a whiffed attack will not produce a wall bounce even if it hits before Vanish does. An exception to this is during repeated ki blasts. You will get the wall bounce even on a ki blast that has yet to hit so long as least one of the ki blasts connected beforehand, as they are all considered part of the same move.

Punish Tool
When used from a neutral state, the opponent will be blown away, allowing you to punish slow attacks, though not for a lot of damage.
However during Sparking!, hold the buttons to teleport behind the opponent without attacking! You can then follow-up with your own combo and punish them big time!

Escape Tool
Since Vanish teleports you behind the opponent, this will allow you to escape certain mixups the opponent attempts to perform on you. The downside is that there needs to be a gap in the opponent's blockstring big enough to execute a Vanish and some setups account for this option. 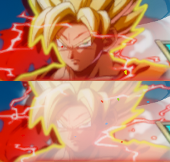 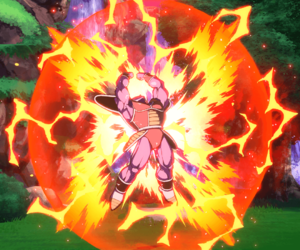