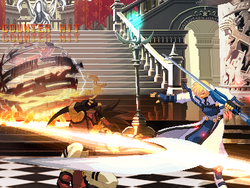 COUNTER! Prepare to bring/feel the pain! 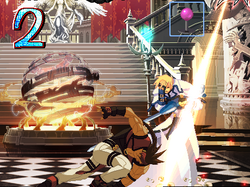 You can be hit and thrown during stagger.

Stagger is a hit effect that renders your opponent helpless to both attacks and throws for a short period of time.
A joystick icon will appear underneath their health meter indicating to stagger. Shake the joystick as fast as you can to escape the stagger sooner. Hitting buttons does not help escape stagger at all. 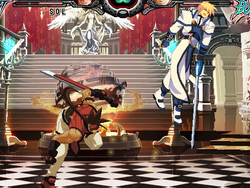 Certain attacks will launch the other player into the air, even when they are standing or crouching. Standing Dust is an obvious example, but also many Sweeps will actually slightly lift the enemy into the air and thus can be used to start air combos.

Other basic examples include Potemkin's 2H or I-No's f.S. Some attacks only float the opponent on Counter Hit like Ky's 6P.

Most attacks push the opponent away on hit and block, but certain attacks will actually pull the opponent closer. These attacks can be used to greatly aid combos and perform setups. An example would be the first hit of Ky's 6H. 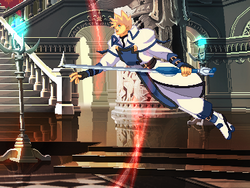 Some attacks bounce the opponent off the wall/ground when they hit. A ground bounce causes the enemy to bounce off the ground and back up into the air, thus having a similar effect as a move that Floats. A wall bounce causes the enemy to quickly bounce off the wall and fall toward the ground. Wall bounces can only happen to enemies in the air, however most moves that wall bounce also float, which gives you one less thing to worry about. 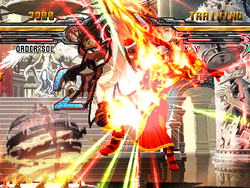 Air attacks can normally be air normal blocked, but some attacks MUST be blocked with an FD. The primary example of this is Dragon Install Sol's Volcanic Viper, which must always be FDed after the first hit if you are in the air, regardless of whether the Volcanic Viper was done in the air or on the ground. 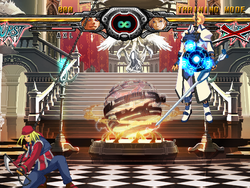 Certain attacks just can't be blocked at all. Examples include Potemkin's Slide Head (236S) and Axl's Rashou Sen ([4]6H). You pretty much just have to get out of the way of these attacks, because you certainly aren't going to block them! 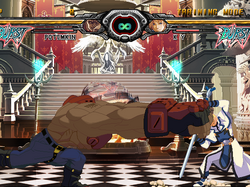 Although there are technically only 5 levels of attack in GG, some attacks have special properties refered to as "Level 6" attacks. These attacks have extra added blockstun, and make a unique sound when blocked. Examples include Potemkin's 6H, and Ky's 6H.

Off The Ground Attacks (OTGs)[edit] 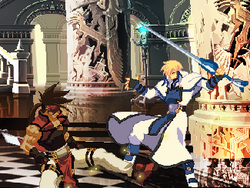 To Off The Ground (OTG) someone means to strike them after they hit the ground.
Unlike other games, once a character has hit the ground in GG, you cannot OTG them into a relaunch. OTG attacks only do 25% of their normal damage however, and can be teched out of quickly. This generally makes OTGs poor tools for adding damage, but still good for pushing the opponent towards the corner at the cost of sacrificing okizeme.
Some special attacks still gain their effects OTG, such as Johnny's coins or Testament's crow curse.