Difference between revisions of "P4AU/Ken Amada" 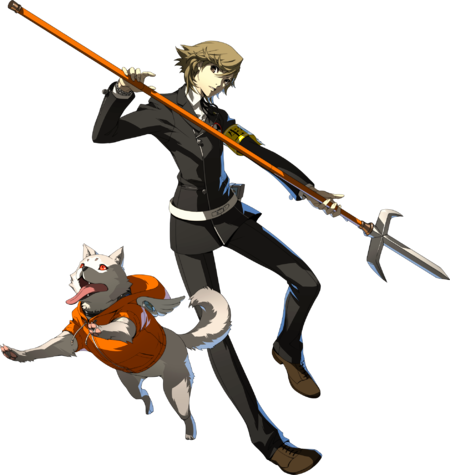 P-1 Climax Nickname: "The Pretentious Tenderfoot Duo"
Persona: Kala-Nemi (Ken) and Cerberus (Koromaru)
Arcana: Justice (Ken) and Strength (Koromaru)
Backstory: Ken Amada and Koromaru are both former Specialized Extracurricular Execution Squad (SEES) members. Originally introduced in Persona 3, both fought to end the Dark Hour and to rid the world of Shadows after experiencing loss firsthand, awakening their true potential. Three years later, Ken and Koromaru are revealed to be living together at the old dormority in Port Island while Ken attempts to fulfill his promise to Mitsuru to be a "normal" kid; however, the capture of the other Shadow Operatives and the seeming return of the Dark Hour put the pair right back into combat. Ken fights with a spear, his weapon of choice from his SEES days, as the reach offset his shorter height in his younger years, while Koromaru wields a kunai between his teeth but now wears the orange hoodie that was once Ken's. Fighting together, the two become a team capable of holding their own: Koromaru excels in close-quarters combat, with fast, short-reaching attacks that can interrupt opponents, while Ken uses his spear to launch his offence from a distance before pulling the opponent in for the kill. With their personas, the team is capable of both fire and electric attacks as well as healing, while their Instant Kill combines Ken's Hama skills with Koromaru's Mudo prowess. Their playstyle reflects the bond between them: combining Ken's wide-ranging attacks with Koromaru's quick jabs to constantly keep enemies pressured makes them a threat to any opponents they encounter as they fight their way through the P1-Grand Prix.

In this part, you can talk about anything you feel like beginner players should know.

Add more asterisks to further indent your text as necessary.

This combo section is designed on a "move starter" basis. However, you can use whatever kind of organization you prefer, as long as it is readable and efficient.

*insert move name* Starter
Notes: In case these combos need notes. If they do not, you can remove this line.
Point 1

Copy and paste the code from Point 1 to Point 2 as many times as you need to.