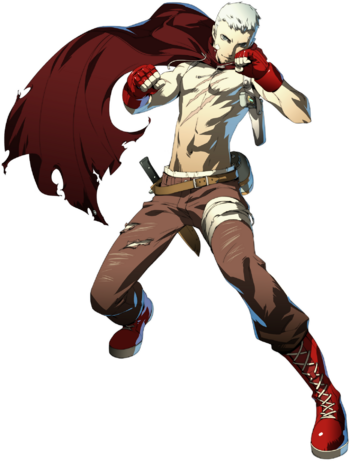 Ever since his little sister died in a fire, Akihiko vowed to become stronger. This vow is what causes him to take up boxing, becoming an undefeated champion in the process. He's always eagerly looking for ways to improve and train, often to a fault. However, this eagerness is what drives him to face danger head-on, regardless of how hopeless the situation may be.

After graduating from Gekkoukan High, Akihiko went to college. He decided, however, to perfect his punch and traveled the world in his pursuit of becoming stronger. Mitsuru sends him an invitation to the P-1 Grandprix, and Akihiko willingly returns to Japan. .

Akihiko can cancel certain Skill Attacks into each other. Each cancel increases the gauge by 1 (max level 3). Certain attacks deal more damage and gain special properties depending on the level.
For example, Level 0 Corkscrew only knocks the opponent away, while Level 3 Corkscrew wallbounces the opponent. Level 0 Double Upper allows the opponent to ukemi in the air, while Level 3 raises the opponent higher and increases the hitstun significantly, allowing you to combo afterwards.
The Cyclone Level reverts back to 0 very quickly after you stop canceling attacks into each other. This means that the Cyclone Level only really works on a per-combo/blockstring basis.

By using this power-up super, Akihiko's punch attacks shock the opponent on block.
This stops the opponent from moving, allowing Akihiko to easily get close to the opponent and rush the opponent down.
This buff remains until Akihiko is hit.

Akihiko's greatest strengths come from having a multitude of options in a block string including an mix-up, unblockable, bait/escape, cross-up, and throws. Once a grounded opponent has blocked a Kill Rush, any one of these options opens up (though cross-up requires meter). Unfortunately, an Akihiko often cannot throw multiple of these into his pressure strings so the key is to get it right the first time by being creative and unpredictable. Facing a player blocking everything? Finish your block string with a Duck (C) -> throw. Maybe do it twice. Now bait the furious action by leaving out the throw or backing away with Weave (D). Or cross-up with Duck (SB). Or anticipate a counter with an invulnerable SB. Sweep and an AOA occasionally but at different points in your block string. Use Boomerang Hook (B)'s block advantage to reset and keep pressure.

Akihiko's struggle is that he needs to get in close often and has poor mobility options. Your jumps and air dashes are fairly slow. Kill rush can close the distance fairly quickly and surprisingly (especially with SB. Get oki from a long distance). but it hugely punishable on whiff. Inversely, against zoning characters Duck (D) -> Corkscrew (B or SB, SB having the nice benefit of being invulnerable and passing through projectiles) can close distance quickly but is hugely punishable on block.

The only footsie game Akihiko has is with his "weak" persona but can be punished when predicted. 2C is the safest option and can catch opponents who evasive action expecting 5C. jC has the greatest range and largest arc and can be nice to catch people hoping to catch you on the ground. Akihiko can punish hard on CH though.

Pull in zoners like Naoto and Elizabeth with D. Make them question committing to their long range attacks. Alternatively, weave (C) against Naoto and build your meter. You can force her to come to you. These work less against Yukiko's who can set up their approach largely to their advantage. Stay calm, watch close, and find openings to close the distance fast. This can mean Duck (D) under fans and Corkscrew (SB) through projectiles. Take some solace that you've got a good amount of health and Yukiko's don't punish too hard. You'll have a few chances to make mistakes so long as you keep your head.

My personal opinion is that Akihiko's autocombo should not be quickly disregarded. With meter, many options open up to him to close distances, pass through projectiles, save otherwise unsafe maneuvers, cross-up combos, or keep pressure. Poor defensive options make his burst invaluable. Akihiko's autocombo does decent damage (best of all auto-combos?) while building meter and burst. At mid-stage and early on, the extra meter can be worth more than the extra 400 damage, especially if it leads to another combo. Just make sure to you manually input the last corkscrew so you don't spend the hard earned meter.

Akihiko is a character where the best defense is a good offense. A lot of his more useful defensive options are extremely situational. He can D Weave against short range attacks to step out of range and and Corkscrew on reaction. C Weave is extremely useful against projectiles and long range attacks, such as Mitsuru's 5A or 5D, Naoto's bullets, and Yukiko's fans. When countering Mitsuru, spacing is extremely important. Her 5A attack can often be countered with a reaction A Corkscrew. Her 5D whip varies, at mid-range a B Corkscrew reaction will reach Mitsuru before she recovers. At longer ranges, it is better to D Duck in quickly and start pressure. Against Naoto, C Weave will avoid all of her shots at longer range, depending on spacing you may risk a reaction Corkscrew. However, Naoto's recovery is short so watch for either additional shots or a follow-up rushdown. Yukiko's fans are much trickier to deal with, as their slow speed and an unlimited amount of them makes it difficult to counter. At closer rangers you can burn 25 meter to SB Corkscrew through the fans. At longer ranges, merely build meter and wait for Yukiko to make the first move. Fans can be rolled/ducked under with proper timing, but if additional fans are incoming you make need to return to the C Weave standstill. If you get close enough in, a Corkscrew or Sweep will interrupt the stream of fans.