to continue running forward. When you stop running your character will slide to a halt. You can not block during this sliding animation but you can cancel the slide into attacks, jumps, and Barrier Defense.
Tager can not run or Forward Step (poor Tager).
Forward Step
Some characters do not run forward: instead they perform a quick step forward that goes a preset distance. Some characters can cancel this step into attacks, jumps, etc.
The following characters use forward steps instead of runs: Hakumen, Hazama, Valkenhayn(Human Form), Carl, Bullet, Arakune, and Azrael.
Dash/Run Brake
Because runs and dashes normally have a vulnerable sliding animation at the end, players typically cancel the run into Barrier Guard briefly, then continue doing whatever they wanted to do. This is a very powerful technique to maintain a specific range vs the opponent, and you should be in the habit of doing it every time you want to stop running.
Backstep
To perform a backstep, press

Emergency Tech
When a character is knocked to the ground, press any button to make the character flash white and flip off the ground. An Emergency Tech takes 32 frames and is fully invincible, but is slow thus giving the opponent time to set up a mixup.
You can delay when you Emergency Tech in order to throw off the opponent's attack timing, but this carries some risk; 8F after you touch the ground, you can not Emergency Tech or Roll for 18 frames. The opponent can hit you during this time and continue the combo, though the HUD will show that the combo was invalid (since you could have escaped earlier). This is used in many attack patterns to "force" the opponent to emergency tech or else they will eat a combo!
The following time table shows a character's options and status during a knockdown.

Certain moves like Ragna's 6B do a hard knockdown, which prevents emergency teching. Therefore using such a move, and then hitting the character again before they can move again is a legitimate combo and the HUD will not turn blue.
Crumple Recovery
Some attacks place the opponent in a crumple state such as Jin's Sekkajin. The crumple state is vulnerable to attacks and after a period of time you will fall to the ground if you do not recover. To recover from crumple, press A/B/C. Crumple recovery takes 8 frames.
If you are attacked during the recovery, you will be automatically block the attack high/low as appropriate. However, if you are thrown during frames 6-8 of recovery, you will be considered out of hitstun (for the purpose of differentiating between green and purple throws). If you are thrown by a command throw during frames 6-8, it will be inescapable, so watch out!

at neutral.
Super Jump
To Super Jump, start from

, then quickly press any downward direction, then any upward direction. Super Jumps have startup just like normal jumps. They are used to create vertical distance between you and your opponent as well as to run away; super jump over the opponent, then air dash away! Note that unlike Guilty Gear or Persona 4 Arena, you CAN double jump after a super jump.
Air Dash Forward/Backward
While airborne, press

Clashes happen when two opposing hitboxes touch each other. During a clash each character can cancel the attack into any other attack at no cost (but not a jump, dash, block, etc.), but you must be fast to react to it. Thus when clashes happen either the players are unable to react to it because it is unexpected, or they understand how the attacks interact well enough to intentionally cause a clash to cancel out the opponent's attack, then retaliate with their own!

When you hold down an attack button in BBCP, the game repeats the button input every frame for as long as the button is held down for up to 3 frames (speculated). This means that difficult links are easier to do by holding the button a little earlier than usual. 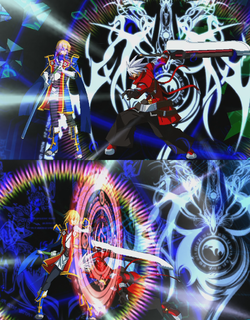 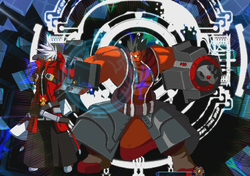 Some supers are special: they have no additional startup after the super flash. This means that you cannot use this super flash buffer to beat these supers because the attack will already be active immediately following the super freeze.