Ragna the Bloodedge is a wanted criminal with an extraordinarily large bounty on his head (well in the trillions) for attempting to destroy the NOL, and is Jin and Saya's older brother. He is a playable character in all iterations of BlazBlue thus far and is the main protagonist of the series. 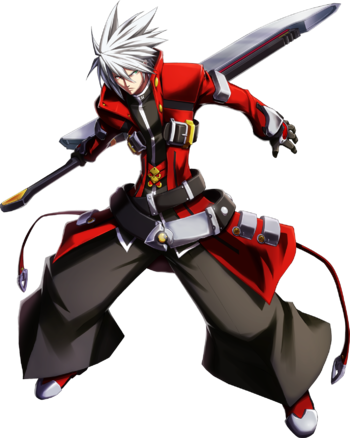 Soul Eater allows Ragna to absorb a portion of the damage of certain attacks for his own health. This mechanic was to offset the very low health that Ragna has. Soul Eater works regardless of hit or block, but does not work against Barrier Guard. Soul Eater has another mechanic where different percentages are applied to different Soul Eater moves depending on where it was in the combo. For example, using 5D (100 drain) then D Inferno Divider (50×2 drain) will result in less lifesteal (192 drain) than with 5D's and D Inferno Divider's lifesteal base values added together (200 drain).

A very important combo staple move. 5D is used in almost literally every combo in Ragna's arsenal, but outside of this, 5D doesn't see much other use. The move is somewhat safe compared to past iterations, but only primarily because 5D lost its Dash Cancel. The pushback on 5D is large, so if used either at the end of a gatling or at certain spacings, you can expect to come out unscathed, despite its poor frame advantage.

Overdrive version will cause a ground-bounce and a hard knockdown, and also enables dash cancels. Interestingly, it has no same move proration, so it can be looped for lazy big damage. It is the only move in normal conditions which can combo into grounded Blood Scythe and Black Onslaught (Ragna's Astral Heat). At the very end of the combo, sometimes the two hits will not combo so beware. Also never whiff this, it is not dash cancel-able on whiff, and it has a long recovery, during which Ragna can be easily punished with a Fatal combo.

In combos, 2D is very useful for optimizing damage with the use of 50 heat. As a footsie, 2D is Ragna's farthest reaching low, but its practicality as a footsie only applies to certain situations. For example, 2D can be used against Tager's Voltec Charge, Litchi's Straight Through, and Arakune's f-inverse on whiff. The hurtbox does not extend past the hitbox, so against supers that have long active frames, you can use 2D for a free, decent combo.

Overdrive version is pretty much the same as the normal one, although it is untechable for longer and can be dash cancelled for followups, usually 5C or to make it safer with the dash while advancing forward. Forces a knocked down or airborne opponent to emergency tech.

Despite only being cancelable to j.D, 6D serves as one of Ragna's more ambiguous mix-up options. The special characteristics of j.D allow for a couple of mindgames, notably its incredibly short landing recovery. Overheads, lows, and throws can be performed from 6D, but it's sometimes tricky to be able to pull it off consistently.

The overhead is from j.D. There is absolutely no gap between 6D and j.D, no matter how late you perform j.D (unless you land before j.D comes out), so if you are close enough when 6D lands, the overhead is almost guaranteed. The only time j.D can whiff is when 6D hits too far away or the opponent barriers while slightly spaced away. Fortunately, you cannot be punished even if j.D does not hit, due to the frame advantage.

The low is performed slightly differently. To perform the low, use j.D just before landing, then input 2B. Be wary that because 2B has a 9 frame start-up, many characters' fastest moves are able to beat you out. Your best bet for landing 2B in this situation is to condition the opponent to block high after 6D (using j.D), and then surprising them with 2B.

Performing the throw is similar to performing the low, but it is riskier. To perform the low, use j.D just before landing, then input throw. The hitbox on throw is very small, so any sort of barrier or spacing will cause the throw to miss. You can utilize a kara throw (B~C) to gain a tiny bit of distance so that the throw will land. Overall, use the throw option scarcely.

Overdrive 6D still has the usual risks and uses, but it's more untechable, and along with the much higher untech time of j.D, a link into 6B is possible, and with the right setup the OD 6D > j.D > 6B > x loop is possible. Otherwise, useful for frame trapping with moves like 2C or 5C.

Using j.D in combos is now a decision rather than a necessity. The high hitstun allows for larger combo versatility at later times in a combo, but the extremely low P2 will butcher the damage, which in turn also butchers the Heat Gain (as it is mostly reliant on damage values in Chrono Phantasma). However, the move has increased lifesteal from 30 to 100, making it useful to gain a bit of life and increase the Soul Eater rate. If you're going for damage, generally avoid this move when performing aerial combo routes. However, if you need some life gain, use as many j.D's as possible.

Ragna's Crush Trigger is one of the simplest CT's in the game. It isn't hard to combo into, in fact, he can combo into it from CH 2C, 6C and 5D most of the time. Due to its hard knockdown, the higher the enemy is hit with using this move, the more untechable the move is, allowing combos even into 6C if properly used. Like all Crush Triggers, costs 25% Heat and has same move proration.

Ragna's Inferno Divider is back in it's full glory. Inferno Divider remains almost unchanged from CP and Continuum Shift, which means C version should always be used as a reversal, and D version as a combo tool. The only time C version should be used in combos is in situations where D version is to be repeated but there is no time/the combo proration is too high to allow for a quick jump into D air Divider. Neither version should be used twice at any point in the combo, otherwise repeat proration will kick in and the opponent will be able to tech very quickly. It also has followups : Upper, and from Upper, Straight Punch and Ax Kick. It is ill-advised to fish for Fatals with the D version: it launches the enemy very high into the air, limiting follow-up options and Ragna could get counter-hit from the move instead.

This move has nothing special with it. It simply leads into either Straight Punch for corner carry or Ax Kick for okizeme/combos. It can be rapid cancelled into an airdash - Belial combo however.

Ragna's Straight Punch can only be used after Upper, and is really only used for corner-carry midscreen(Ragna loses oki however) or for corner combos. However, with the change that made combos time-based instead of proration based, Straight Punch isn't really used in combos anymore, but it's a good option to keep in mind if you're just close enough to the corner for the wall-stick effect, but not close enough for other options.

Ragna's Ax Kick is mainly used after Upper to gain okizeme options, and while it's not the best option for this purpose, it's still very strong. Also an important combo tool during Overdrive, often combined with Gauntlet Hades and Blood Scythe, leading to high damage.