It doesn't display stored data of Start-Up and Frame Advantage for each move, but instead calculates them in real time.

Shows the amount of frames it took from the moment the character performs an attack until the frame that they make contact with their opponent. Hitting late into a move or delay cancels (through meaties or other means) will show "incorrect" Start-Up as it's displaying the meaty frame.

Delay cancel or kara cancel will also lead to incorrect Start-Up. If you input 23L~6, effectively kara canceling 2L into 236L, then Start-Up will include the few frames of 2L that got canceled. 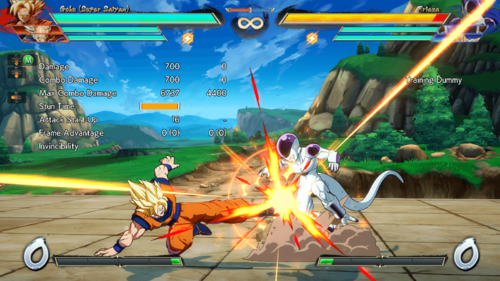 Goku (Super Saiyan) hit Frieza with 2M. Goku's 2M has 10 frames of startup, but the display shows 16, this is because it's a meaty from Goku sliding forward. He's hitting with the 7th active frame.

Showing the frame difference between both characters until they are "actionable".

I don't really know how to explain it scientifically so let's just look at a few examples. 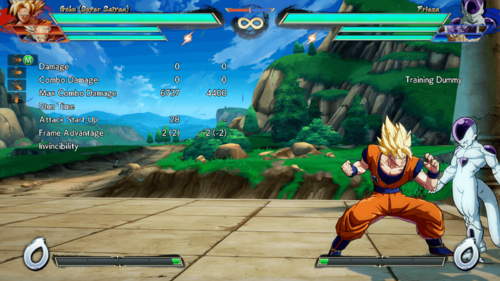 Goku performs 236M, and Frieza blocks it. The display shows Goku as 2 and Frieza -2, so this is as straight forward as it gets. Goku can act 2 frames before Frieza, he's plus on block. 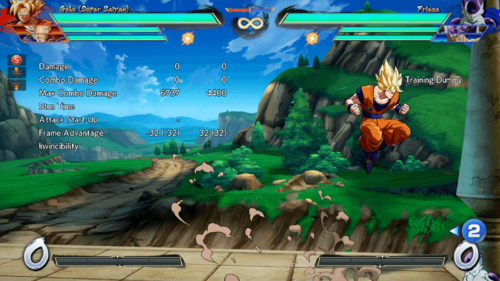 Here I made Goku (Super Saiyan) whiff a j.S, while the Frieza dummy stayed in neutral state the entire time.
The display shows Goku at -32, this is because j.S total animation takes 32 frames. He's only actionable after the animation is over, so he was 32 frames behind Frieza. 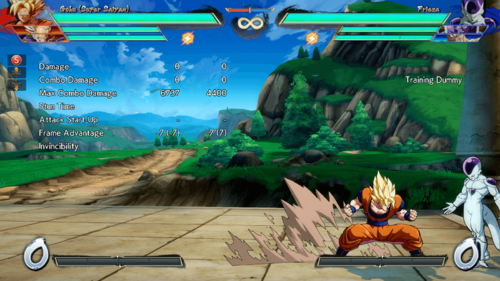 Then when he lands, Goku receives 7 frames of landing recovery from j.S. He's 7 frames behind Frieza, so the display now shows him at -7. 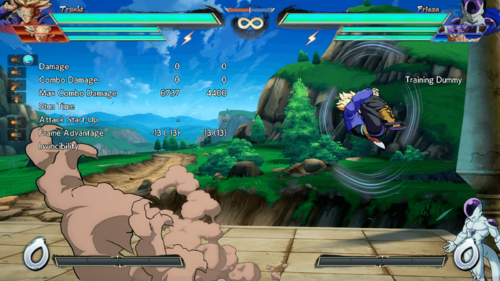 Here is Trunks performing 214L. He's still in the middle of the move and is unable to block, but the display has already stopped at -13.
214L total animation takes 43 frames, but it's cancelable into normals starting on frame 14. The game considers "cancelable into normals" as actionable, so Trunks is 13 frames behind, and can "act" on frame 14 onward.

What do the numbers inside the brackets mean?

The 2 numbers only become desynced if a character changes their grounded/airborne state: 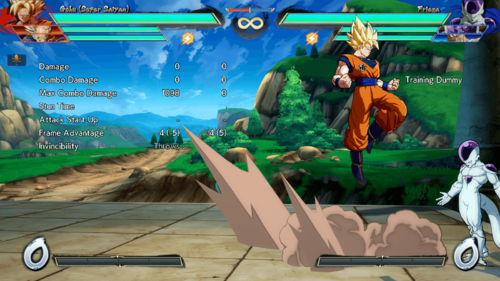 Display shows a normal jump as -4 (-5). Jump has 4 frame of "startup", and the character can only use normal attacks starting on frame 6 (actionable).
Unbracketed number stopped increasing once Goku became airborne, while bracketed number continued to increase until he was actionable. 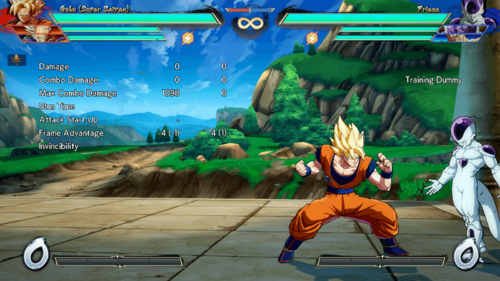 Landing after a normal jump. -4 is from the initial prejump and hasn't been updated because Goku is still actionable ever since he's airborne, but (-1) is from generic landing recovery: Goku can't attack for 1 frame after landing. 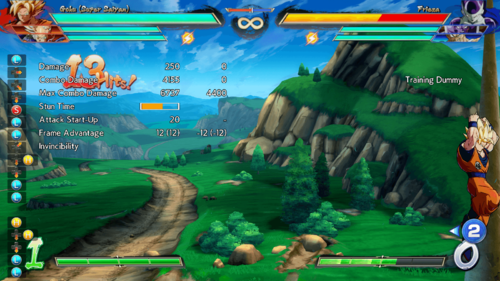 Goku performed a combo and is now falling down. Both numbers increase as this is happening because Goku has recovered from his last attack (j.236L), while Frieza is stuck in hitstun. 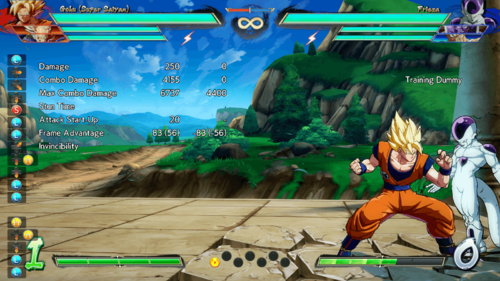 After a while, the display stopped at 83 (56). Goku had 83 frames of adv from when he recovered in the air until Frieza ground teched and returned to neutral state, but only 56 frames of adv after landing.