From Dustloop Wiki
< DNFD
Jump to navigation Jump to search 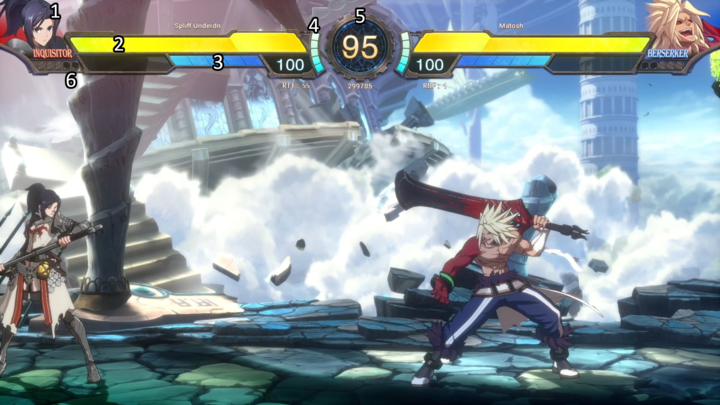 The portrait of the current character in play. Player 1 is on the left, while Player 2 is on the right.

This gauge displays your remaining life. If this HP gauge drops below a certain % that player will enter Awakening.

This gauge ties into MP skills. As you lose life the maximum amount of MP you can have will increase going all the way up to 200, which gives the player access to Awakening.

This gauge ties into Guard damage. Each move applies a set amount of Guard damage and when the guard gauge is depleted, that character will have their guard broken

Each round you win will be tallied up here. If a player wins a round one of the circles will be filled.

Indicates the number of hits dealt in the current combo.

Various texts will appear on the edges of the screen, relating to any interactions that occur.

Denotes the move is a Projectile

Denotes the move inflicts a hard knockdown on hit

Denotes the move can hit an opponent OTGThe act of hitting the opponent when they are knocked down. Short for "off the ground" or "on the ground."

Denotes the move hits low and cannot be guarded standing

Denotes the move overhead and cannot be guarded crouching

Denotes the attack is a grab/throw attack.

Denotes the move is invincible against projectile property attacks

Denotes the move is invincible against all attacks except throws

Denotes the move is invincible against throws

Denotes the move has Super Armor, allowing it to continue when struck by attacks that are not awakening attacks.

Denotes that the move has invincibility frames

Increases / Decreases the amount of white damage dealt to the opponent when an attack is guarded.

Increases / Decreases the amount of Guard Gauge damage dealt to the opponent when an attack is guarded.

Inquisitor's debuff inflicted by hitting opponents affected by Essence with any MP Skill, consuming it to launch the opponent and deal damage over time.

Kunoichi's debuff inflicted by hitting opponents with any MP Skill. Explodes after a delay, inflicting damage and launching the opponent.

Enchantress's debuff inflicted by Keep Away!

Guard:
Throw (110)Startup:
18Recovery:
40Advantage:
-. Opponents inflicted by Doll Hit are transformed into a doll, where they cannot take any actions besides walking, jumping, or using A normals. When the effect expires, they are momentarily left defenseless.

Guard:
MidStartup:
45Recovery:
-Advantage:
- that grants 1 hit of super armor, the Holy Shock effect on some moves, and access to two extra MP Skills that consume the buff. If the buff expires on its own, Crusader is left defenseless for a short period.