Hold any backward direction while in the air to block. There is no high-low blocking in the air, making it a common place for defenders to go to avoid blocking ground-based high/low/throw mixup. That's not to say that being airborne is a fail-safe defensive posture; getting airborne is a risk since jumps have a lot of vulnerability on startup (you can not block during jump startup and the first 5 airborne frames) and you need to deal with air throws, crossups, and air unblockable attacks.

Some attacks (like most character's 2Bs) can be blocked High or Low when on the ground, but are unblockable if you try to block them in the air. If you are hit by an air unblockable attack, a yellow exclamation mark will appear to show that you could not have blocked it.
These attacks are only air unblockable if the opponent is not already in blockstun; if the opponent is already air blocking (plus 17 frames after coming out of air blockstun) when you perform an AUB, then they will be able to block. This means that AUBs should be the first attack in a string in order to be useful as an anti-air.

Start blocking a moment before the opponent's attack connects to perform an instant block. Your character will flash white and you will hear a clanging sound effect if you did this correctly. Currently it it speculated that you need to start blocking within 8 frames of the attack to Instant Block.
Instant blocking is used for the following:

Sometimes instant blocking once will instant block multiple attacks (such as blocking Yukiko's 5C). In these instances you will only gain 2 SP once for each time you tap block.

this is your cue to move

There is also a second class of unblockable attacks that exist because the opponent and his persona hit you with a high+low attack at the same time. Because you can not block in both directions at once, you are guaranteed to get hit. There is no icon to show when this happens, though you will see an exclamation mark showing that you blocked "incorrectly". 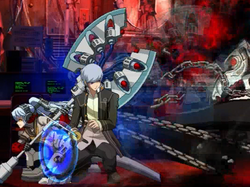 Certain characters can easily perform very ambiguous crossups with their personas. As a small aid against this, for 2 frames after the opponent passes to the other side of you, you are allowed to block their attacks holding either towards them or away from them.

When normal thrown by the opponent, press C+D within 13 frames to break the throw. Note that you can not break throws while performing/recovering from an attack.
On a successful throw break the two characters push away and causes the two of you to enter a quick recovery animation that is invincible. Both characters recover from the animation at the same time.

Press B+D to make your character briefly flash orange, then perform a reversal action like a Street Fighter styled shoryuken or a catch-counter attack like Hakumen from BlazBlue. This varies from character to character, but they are all mostly used for the same purpose: to stop the opponent's offensive momentum.
While Furious Actions do not consume SP, they do transform 5% of your max health into Blue Health regardless of whether they hit the opponent or not (speculation). Furious Actions can not be One More! Canceled or One More! Burst canceled, but you can super cancel them.