. To guard against mid attacks, hold

. To guard against low attacks, hold 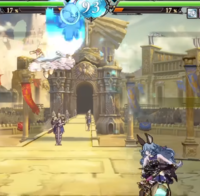 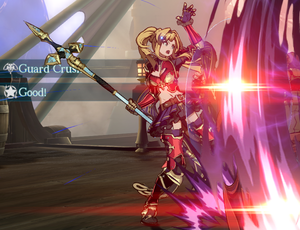 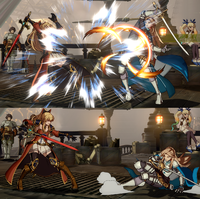 You can break the incoming throw by inputting your own normal throw, but you can not input a throw break while holding 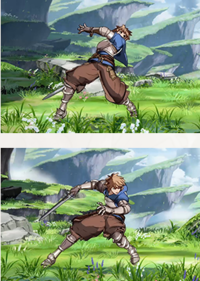 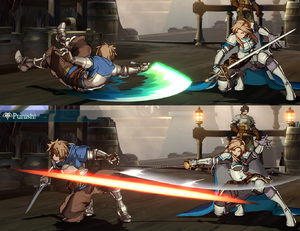 Attacks are punishable on block if the defender has enough time to hit the attacker after blocking the attack. Each character's frame data lists the amount of time to punish an attack on block; this is known as frame advantage/disadvantage. An attack that is -11 on block means that the defender can use an attack that has startup 11 frames or faster to punish the opponent. Of course just because an attack is fast enough does not mean it can reach the opponent, so knowledge and practice are still necessary, even when a player knows the numbers!

The HUD message is helpful for learning while you play. Did you actually punish the opponent's attack or were they just not blocking? Now you can know for sure.

Backshift is a Tactical Move option that is used to gain space on the opponent with invulnerability for the cost of 50% of your Skybound Gauge. Backshifting grants invulnerability from the first frame of activation to frame 15, at which point the move enters recovery. The amount of recovery Backshift has is dependant on your character. Characters with a reversal option such as a

Seox's Thunderflash have high recovery Backshifts with 15 total frames of recovery. Characters without a reversal option, such as

Soriz have low recovery Backshifts with only 5 total frames of recovery.