From Dustloop Wiki
< GG2
Jump to navigation Jump to search

Your main method for creating and ordering your Servants as well as buying items and abilities is through the Organ Menu. Getting used to it, and Overture in general, is a test of patience and strategy. A good player will be using their organ often while also being active in battle. An example of this is a player using the Organ while they are being comboed and during knockdown as their Master cannot act otherwise at that time.

One common misconception is that players may see that characters like Sol and Izuna have weak armies and assume that they don't need to use the Organ often but this is not true. On the flip side one may think Dr. Paradigm spends all round in his Organ due to his emphasis on "Strategy" but this isn't true either, Dr. Paradigm needs to spend a good chunk of his time clearing enemy servants and spreading his troops around. This is misconception is implied by some of Guilty Gear 2 Overture's official materials so that is why it is being addressed here. 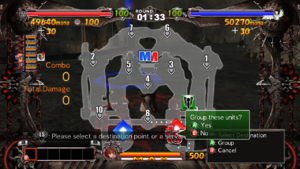 The Organ Menu in use

The primary use of the Organ Menu is commanding Servants. While in the menu, you can hit X to Summon Servants, and use Mana to do so. There is a limit of 40 Servants in 1v1 battles (20 to both sides), and 32 in 2v2 battles (16 to each Master). Making good use of the Servants you're allotted is important, and if you want to get rid of some, you can delete them by hovering over them in the Organ Menu and hitting Y (do so sparingly, as your Mana is not refunded).

Servant groups can be merged by selecting them then, instead of selecting a ghost as their destination, selecting another group you want them to merge with. Likewise you can hold the right bumper while selecting a Servant to split it from it's group which is a very important mechanic for spreading your troops to maintain map vision and control.

The goal of a match is to destroy the enemy's Master Ghost, but this can't be done without capturing the smaller points, known as Ghosts, that are scattered around the map. They're all numbered (as shown in the Organ Menu in the Servants section). Capturing one prevents enemy Capture UnitsSmall enemies that inflict massive capture progress on Ghosts. They are automatically produced by Master Ghosts and Ghosts that have been captured. from being sent and increases your Mana Gain. It's recommended to have at least some units sitting on a Ghost if it's tactically important to you, as they'll be taken by random enemy Capture Units otherwise. 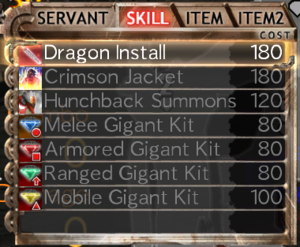 These are purchaseable abilities that each Master has access to. While some, like Sin's Humming Sword, aren't completely essential to that character, others, like Ky's Charged Stun Edge or Sol's Dragon Install, are pivotal. They all cost Mana, and most remain for the rest of the round/match (though some are single use).

Items are important to the versatility of your Master. While they aren't always needed to turn the tide, ones like Resurrection and Life Potion (L) can change a battle from desperate to one-sided. In the Item menu, that shop depends on the time of day the stage is supposed to be, while Item2 slowly fills up over time with random items based on rarity (Resurrection and Elixir being rarest, Mouth Zipper and other cheap items being common).