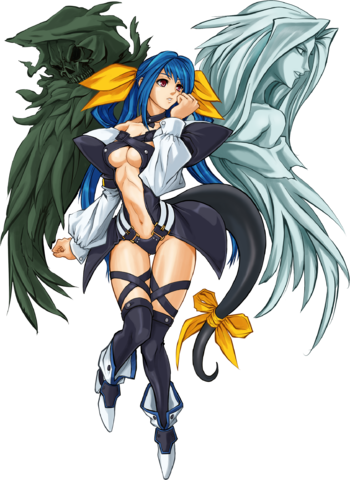 The foundation of Dizzy's offense and defense revolves around the usage of her projectile summons. After scoring a knockdown, Dizzy can utilize her summons for offensive rushdown (particularly the 214 series) to setup high/low mixups, crossups, and tick-throw setups, which can often lead back into a knockdown and allow for Dizzy to keep the momentum in her favor. On defense, Dizzy can utilize her summons, often in multiple combinations, for zoning purposes to control the screen and limit her opponent's movement range or to even cover her approach for rushdown. Dizzy also has a double airdash for high mobility options in either rushdown or runaway scenarios.

Dizzy does have a few weaknesses: a low defense modifier which results in her receiving more damage than usual, no viable reversal moves except for her 632146P Overdrive, and a huge hitbox which makes it easier for her to get hit and get comboed. If Dizzy is pressured in the corner by an opponent, you are likely to remain there blocking for quite some time, unless you try to take a risk to escape (FD jump, counterattack) or utilize DAA or Burst, when applicable. Also, for Dizzy to be able to use her projectile summon attacks, she needs to be well outside her opponent's effective attack range, which usually means she needs to be anywhere from beyond midscreen to fullscreen in order to summon most anything safely if her opponent isn't already knocked down.

To play Dizzy effectively, you need to capitalize on her strengths in order to cover and make up for her weaknesses.

Compared to the rest of the cast, Dizzy has sub par normals, and is generally beaten by most opponents. On the other hand, once she has summons out, she is at a distinct advantage. Thus, the mind games in the neutral game will mostly be about Dizzy getting her summons out. To help her from being rushed down completely, she has ice spike and sometimes 5k and f.S against ground/IAD rushdown and 2s against jump-ins. Usually, the fear of being smacked by an ice spike (especially if you have tension to FRC, which makes it completely safe, and sometimes even allows you to punish their attempt to punish) is what will keep the opponent hesitating from rushing you down, and will allow you at times to trick them with a dry summon. Against certain opponents, even the odd unexpected rushdown (like, IAD back, airdash forward j.P/j.2s) can work out if they are only expecting the Dizzy player to play keepaway.


Okizeme with Dizzy is all about planning. Once you score a knockdown, your okizeme input for the next few seconds will have already been planned before the opponent rises. Through planning and practice of okizeme, you can have the potential for endless possibilities to scare and control your opponent. However, if you only improvise your okizeme, there is a chance that your pressure may not be effective and that knockdown opportunity will have been wasted and whatever momentum that you once had will have been lost.


These are some of the common okizeme patterns that Dizzy players utilize. The possibilities for okizeme with Dizzy are endless.


No follow-up combos are listed here but most of these setups can be followed up by either 2K or c.S into a standard combo for knockdown and reset. Also, many of these aren't auto-combo scenarios, which means you'll have to be prepared to go into a combo earlier if the opponent is hit before coming to the end of the attack string.

Dizzy has the potential to do both damaging and stylish combos. However, it is a good idea to end a combo with a knockdown instead of continuing the combo for extra damage and sacrifice the knockdown in the process. Unless you get a significant amount of extra damage from the extended combo or if the extended combo inflicts enough damage to finish off the opponent, going for followups that remove the possibility for a knockdown are seldom worth it.

Must hit relatively close with 5K/2K, otherwise 2H will not combo after 5H hits.

Combo after a long-range 5K/2K hits.

... 2D
... c.S > 2D
Various combos into a 2D knockdown off of a 5K/2K poke.
Okizeme is possible after knockdown by utilizing 2D special cancel/jump cancel options.

The Bubble Loop is the most damaging combo technique you have access to as Dizzy. This technique requires a 421[S] attack to be held and active while you air combo the opponent and release ]S[ after a j.H to allow you enough time to summon a bubble that pops and strikes them, keeping the opponent in an aerial juggle state that can potentially allow for additional followup combo opportunities. The timing for the Bubble Loop can be quite strict, but it is usually worth utilizing even though it's a situational combo.


Sometimes, the summoned bubble will be popped by ]S[, other times you will have to manually pop the bubble with an attack instead. You can use j.K to pop the summoned bubble, since in most cases it will only hit the opponent if they weren't already lifted up by the popped bubble. j.H can be used to pop the bubble for more damage, though the timing to utilize it is significantly harder.


There are variations to the Bubble Loop: standard jump, super jump, and IAD. The version you end up utilizing may vary depending on the opponent as well as method of initial launch and even follow-up repetitions of the loop can be affected by this. It can be possible to end a rep of Bubble Loop with a knockdown, if applicable. Most of the time though, you will probably want to do multiple reps for big damage, especially if it has the potential to cause enough damage to finish off an opponent.

This is a good setup to practice with, also try it without the IAD.
In a live match, you can release ]S[ to keep Dizzy safe from being punished if 6H is blocked.

Use this variation if you're unable to summon H-Fish.

Dust Combo into Bubble Loop. The first j.D can be substituted for a j.H or just do a 1-hit j.D (delay it a bit) and will work on some chars.
This variant doesn't work too well on heavy chars.

Anti-air into Bubble Loop. The 2S CH must hit close and above Dizzy for the combo to work properly.

These Bubble Loop variants are based off of okizeme setups. The reason they work is because the P-Fish bites help you to lift the opponent up into the air.
Both of these Bubble Loop setups work on the entire cast of chars.

236H FRC is one of the most difficult FRCs to execute in GG and it is important for you to know/learn it if you wish to be proficient in using Dizzy.


It has the following uses:

It is recommended that you learn the FRC point through muscle memory because relying on audio/visual cues alone means that you can't concentrate on more important aspects of the game during the match.


In addition to a stand-alone 236H FRC, you should also practice the following:

The first three (2H, 5H, f.S) are the most commonly used examples after a standard gatling combo that ends with 236H.
The fourth one (5K) is often used when you hit-confirm it as a long-range poke and are too far away to gatling to f.S or 5H and instead go straight to 236H.
The last one (2D) is specific to GGAC (in regard to the special cancel) but it is familiar in usage to those that have played as Dizzy in previous versions of GG.


Another technique that is associated with the use of 236H FRC is the ability to buffer a 'dash motion' which allows you to follow-up with a movement option after the FRC for either a combo opportunity or better positioning for okizeme. A common practice after the 236H FRC is to input the forward direction at the same moment as you are inputting the 3 attack buttons for the FRC. By doing this, it makes dashing forward after the 236H FRC a lot easier since the first directional input is already achieved and all you need to do is return to neutral and input the forward direction again to be able to dash.

2D has a strange property that allows you to cancel it into a special move using the jump-cancel, which makes you able to use special moves when you normally can't. By utilizing this technique called '2D Special Cancel', Dizzy has more options available to her after using 2D.


The '2D Special Cancel' is a technique where you utilize the jump-cancel property of 2D to cancel into a ground-based special move after 2D connects on an opponent.
Basically, you jump-cancel the 2D, then after the 2D hits but before you jump, you execute the input for the special move, which results in a special cancel.


There are three different ways you can execute the '2D Special Cancel':

Method 2 - The smooth way
Do 2D, press up (8), then drag in a smooth motion to include the input of the special move command:

This method doesn't work with 421S.


Method 3 - The accidental way
Do a tiger-knee (TK) version of the special move command:

If you TK the special move input too soon, you will either jump or 'accidentally' get a TK Bubble if your timing if off.

2D Special Cancel allows you to have more utility and options after a 2D hit/knockdown.

IAD j.2S > AD j.2S is an attack string that Dizzy utilizes as the lead-in to the 'High' in her High/Low Mixup for okizeme.
To achieve this, you must do the first j.2S as early as possible in the IAD, which will give you enough time to recover from the move and allow you to follow-up with another AD before you land.