On the training mode menu, you must Hit R1/L1 to change which screen you're on. The screen with the green background affects the dummy side's character. 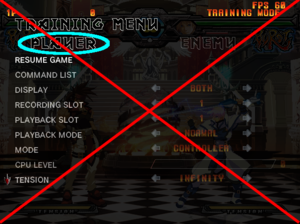 You MUST switch from this tab to set up the dummy. 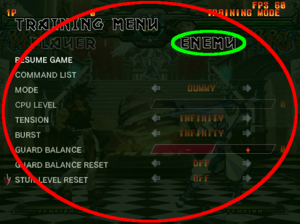 Make sure you're on THIS tab for all of the right tools.

How do I set the training dummy?

To ensure the combos you're practicing are valid, set "recovery" to either "back" or "forward", and "recovery frame" to zero. (This is because neutral techs are one frame slower)

Some other important menu options include:

If you wish to practice dizzy setups, you'll need to record the dummy mashing out manually and play it back. 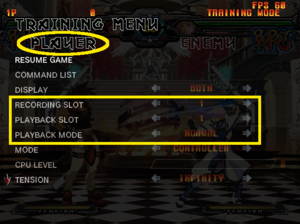 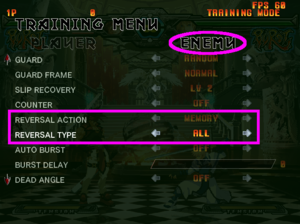 Outside of the PC version, there is no way to play inputs back on wakeup or as a reversal, you would have to time it manually yourself.

This tells you the moves your character has.

Turn on/off damage and/or command inputs. Please note, the training mode input parser is not the most accurate.

You can set how your character behaves. Cycles between Controller/Dummy/CPU.

Sets how good the CPU is if the Mode is set to CPU.

Sets Tension bar in increments of 25 or infinite.

Toggles how Bursts behave, between normal and infinite.

Sets the position of the Guard Gauge.

When toggled on, the Guard Balance will reset to the position set in training mode when exiting blockstun/hitstun.

When toggled on, Stun will reset when exiting blockstun/hitstun.

Toggles between different settings of Stun resist. No stun disables stun. Each increment up in the numbers increases the difficulty to Stun the opposing character.

Sets the hit point value of the character.

These are for character specific mechanics.

When Mode is set to dummy, this will set what the dummy will be doing.

If the state is set to an action, this will set how often that action is done.

Toggles between different Guard options for the character. Limited guard is guard after first hit, it is a little buggy.

Toggles between different types of Guard techniques, use to to set Instant Blocks, Fautless defense, Slashback.

Sets the counterhit state for the character.

Sets an action for the character to do as a reversal.

Sets when the character will do the reversal action.

Sets bursting options for the character

Delays when the auto burst will happen for different burst timings.

Toggles on/off/random if the character will Dead Angle.

Bind your buttons to attacks/actions/macros here.

These are all weird extra settings you can mess around with. They're sort of like dip switches on arcade boards. Need to write up a page on what everything does sometime. Not tourney legal!

Makes everything go back to default settings.

The help and options menu from when the game shipped originally.

Goes back to character select.

Goes back to the main menu

Additionally, a list of expanded training mode options can be found here: