Venom is a character that rewards good control of the game's tempo and thrives off of knockdown situations.

Venom's normals have decent frame data and great hitboxes when used in neutral. These normals can be leveraged to gain breathing room to set balls. Without balls, Venom fights on the ground from distances primarily utilizing his f.S and 2S pokes. They cover good horizontal distance for their speed, but be careful because they lack vertical control, have little active frames, and have lots of recovery. When poking with them from distances, one should also frequently cancel them into a ball set - the preferable option for sure if one don't have charge. Venom's Stinger Aim and Carcass Raid specials are situationally very strong spacing tools and can be used to punish poor positioning and movement, and interact with his other balls to level them up. Balls augment Venom's neutral and oki significantly. Balls can enable strings which are normally impossible both on hit and on block. Usually Venom will only have time to set 1 ball in neutral, so it is important that the player utilize a mixture of Stinger Aim, Carcass Raid, Teleport, and normal moves in order to control space and set up for an opening to get a knockdown. Off of a knockdown venom has numerous options for oki. In brief: Venom wants to usually set a ball or charge a QV in order to set up safe and powerful oki. 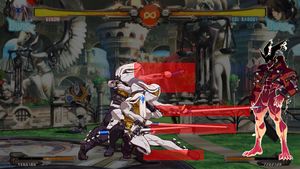 The graphic pictured here shows the common buttons Venom uses in neutral to poke out the opponent. 2K and 2S (the two lowest hitboxes to the ground pictured) are his fastest pokes. 2S reaches far enough to hit most characters at round start range. 2S is a mid so it does not need to be crouch blocked, and it is at just the right height that it can be beat with low crushes, and it can be low profiled by moves like Sol's Ground Viper. Far Slash is his longest poke. It is a balanced mix of speed and range with the hitbox extending 90% up the pool cue. 6P is the last of his primary pokes. 6P Does not have very many gatling options, and is on a forward input so it is very hard for Venom to store a charge during it. This makes it comparatively unsafe to whiff in comparison to f.S or 2S, but it is still one of his best buttons.

The first thing to do before learning the combos or the oki is to get used to Venom's buttons.

Combos are useless if Venom can't get control over the match and start them. Venom will not get good oki if he is not putting himself in a good position for it with good spacing and proper combo routes. It is important to be comfortable with using f.S and 2S to control space, and be familiar with the range of c.S because it is mandatory for most combos and pressure. Knowing Venom's buttons and where it is possible to use them is the first step to learning any character, Venom included.

This section contains very simple combos that will help players learn Numpad Notation and easy, reliable combos. Numpad notation, put simply, means that motions will be listed using numbers, and buttons will be referred to with the first letter of the button name. These combos prioritize ease and applicable theory over efficiency. More advanced combos can be found on the Venom Combo Page.

Everything from this point forward will assume that you understand Numpad Notation. If you do not, visit the previous page and study it.

For further information on Venom combos, combo theory, the damage and tension that they build, and who they work on, visit the Venom Combo Page.

Cancel into 214K, and do a micro-dash jump and hit the ball with j[K]or[S]. The ball will hit meaty giving one a chance to go high, air dash into multiple highs, or empty low. If one manage to land on the other side, one can go low or airdash backwards with a crossup j.S. In addition, a whiff crossup j.P into throw can be an effective setup.

Most K ball okizeme loses some effectiveness as a mixup when one's opponent has 25 meter. Reversal Blitz will almost always beat this oki when the ball is launched with j.K, and if one's spacing is bad it could potentially beat the j.S hit too. The j.K hit will yield a better frame advantage than the j.S ball which forces one to choose between safety and advantage. This can be somewhat circumvented by jumping forward without running to hit the K Ball, then airdashing. In this case, empty low is mostly eliminated as a mixup, but one can vary the amount of overheads one do (such as j.SH vs j.SPS as strings, as well as adding Mad Struggle at certain points).

Be careful of Dragon Punches and other invincible reversals. one can also come down with FD as DP bait, but this limits one's mixup options.

This setup is one of the easier 2 ball setups.

After a 2D(2) or long range 2D(1) knockdown, cancel into S ball and then P ball. After the P ball one needs to determine the distance of the enemy. If they enemy is further away, use micro-dash 5K to hit the balls. If the enemy is closer do a micro-dash 5P. This will give one 2 balls at different heights to create pressure from.

Venom blockstrings can either be short and simple, or long and complex depending on screen position and ball presence.

As a general rule Venom's midscreen pressure is fairly weak and will often either leave a gap, be blitzable, or can be beat by FD. Midscreen is almost like a game of RPS between Venom and the enemy's defensive options. In the corner Venom's blockstrings become much more complex, and will change drastically with his usage of balls, special moves, and meter.

Below are a few simple strings to incorporate into blockstrings. The list is neither exhaustive nor comprehensive.

f.S/2S options on hit
Nothing - allows you to react to IAD j.P with 6P/Airthrow
Stinger YRC - beats 6H and leaves time to react to IAD j.P, but takes meter. No real counterplay from Jam.
Delay Backdash - Makes 6H whiff
QV - Beats 6H and other run-up buttons if done for the minimum charge time. Loses to IAD and charged Ryuujin
pSet > 5P > 6H - beats IAD j.P but loses to 6H if within 6H range. Loses to run up f.S if too close. Loses to charged Ryuujin.
set > backdash - avoids 6H and gets out of range of most run-up buttons. Can beat IAD j.P with 6P.

On block, options are mostly the same, however:

Among other things, QV can be used as a oki tool, and as a blockstring ender. This creates a frame trap, between QV and the following button + Ball projectile. Be careful not to mash during this. This does lose to DPs and fully invulnerable reversals. Sometimes it can be jumped out of.