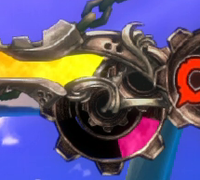 A positive R.I.S.C. Level is denoted by the pink filling the gauge.

Another interesting feature of the combo system is gravity effects. Characters fall at different speeds in Guilty Gear and are loosely grouped into categories as listed below. The heavier a character, the faster they fall.

Additionally, the more hits a character takes, the lower the character will be launched. This can prove to be helpful or detrimental to a combo depending on which way you look at it. Some combos may only be possible if the launcher sends the opponent high into the air, while other combos benefit from a lower launch.

When special attacks and Overdrives are blocked, they deal a percent of their base damage as chip damage to the opponent. For most specials and Overdrives, it's a small, unspecified fraction, but there are some moves such as Axl's Sparrowhawk Stance, Elphelt's Miss Travailler and Venom's Dark Angel that deal enhanced chip damage.

Chip damage ignores Guts scaling making them much more potent when the opponent is low on life! Additionally chip damage can only kill someone if they are exactly at 1 health! This means that defenders can block a special attack if they have a bit of health and survive!