From Dustloop Wiki
< HNK
Jump to navigation Jump to search

Mr. Heart is a 'grappler' type character, and he plays similarly to the grappler characters in other ARC games. Specifically, he moves very slowly and has no forward dash. Mr. Heart also has no Boost gauge, but his Banishing Strike still functions identically to other character's in that he is able to do a follow-up wallbounce combo. He is also able to use his Aura to perform a special Guard Cancel that can be followed up with a combo. As you would expect of a grappler character, he has a large amount of grab type moves, including both a grab super move and grab Fatal KO(which is the only FKO in the game that cannot be comboed into).

While fairly decent on both the offensive and defensive, his poor maneuverability is what causes Mr. Heart to be considered a weak character. Because of his slow speed Mr. Heart is often unable to get out of disadvantageous situations without taking a risk. That said, he has extremely high potential, and is quite capable of overcoming his bad matchups.
Playstyle

One of Mr. Hearts most important normals, it serves as a combo filler, anti-air and combo starter.

Not nearly as good as crouch B, but still occasionally useful. Is used in some combo enders to stuff some extra damage before Heart's 236236A.

This move should almost never be used. It has an incrediblity long startup time, which is only worth it if you can get the full charge damage wise. It is also neither special or normal cancelable, although it can be used in a gimmicky blockstring due to its range and hit of armor.

A launcher that can be chained into from 5A. Is used heavily in combos and as a hit confirm. Can be jump cancelled allowing IAD pressure from strings such as 2B > 5D/5A > 5D. Not a very good button to press in neutral though.

A quite fast and good reaching jab. Usually best used in conjunction with 2B to hit confirm.

Mr. Heart's most trusted companion and main poke, this baby not only has alright range, it also combos into Banishing Strike or Earthcrush (depending on range) on hit. Use it often.

See 5C. Also doesn't hit low but launches on charged hit for an Earthcrush style combo. Not worth the risk though.

A good air-to-air poke that can be special cancelled into AC air grab.

Can occasionally be used as an instant air-dash pressure tool, but is otherwise primarily used to adjust the height in wall bounce combos.

Holding this button will make Mr. Heart float in the air, and if he lands without launching the attack, he will gain one hit of super armor that lasts until he gets hit, takes chip damage, or performs another armored move such as 5C or 623C.

In general, it's an alright air button just for its range. Comes with plenty of hitstun.

A relatively fast overhead that shares its animation with 5D, but cannot be canceled. Unfortunately its poor reward on hit and bad frame advantage stop it from being very useful. On a deep corner hit, you can OTG with Heart's 236236A.

A sideswitching throw that allows for combos when the opponent is thrown into the corner. A great mixup option that leads to huge damage or even death vs some characters. Has an incredibly short whiff animation that can let you 623A or 5A an opponent that jumps out.

Probably the best BD Throw in the game. Unique to Mr. Heart, this BD Throw can grab crouching opponents and combo into itself during Itteyo!! When performed far away from the opponent, Mr. Heart will wait for a bit and then begin to run at the opponent, and throw them when he reaches them.

Heart does not have a Grave Shoot.

One of Mr. Heart's most important moves. Anytime it's possible try to confirm into Banishing Strike as the follow up boost is free. It is also an essential combo starter (just like his Guard Cancel) that can often lead to 50% without meter, or 100% with it.

Mr. Heart vacuums the opponent in with his powerful lungs. This will pull in the opponent from anywhere, letting you extend wall combos, change their jump arc, pull them in from neutral, etc. Get creative!

A special combo starting counter and projectile reflector, Mr. Heart puffs out his chest and sends the opponent away similar to a Banishing Strike. Cannot counter low attacks, and has a small amount of punishable recovery, making it a bit risky.

If done during blockstun, it functions as a unique Guard Cancel that takes half a bar of Aura, and applies a Banishing Strike effect, allowing for deadly combos. One of your most important tools.

One of your most important moves, Earthcrush functions as Mr. Hearts primary long range tool and Grave Shoot. B version is right in front of Heart, and D version is full screen but has slower startup. Sadly it's hitbox isn't as large as the sprite would make it out to be, but it's still a key part of your neutral and combo game.

A unique aerial slam. Sends out an unblockable shockwave along the ground that knocks down the opponent. Stalls your air momentum, allowing you to mix up opponents trying to anti air or tech chase. Due to its long recovery, you don't get much advantage on hit.

An anti-air grab with extreme range. Key part of your defense and combos, leading to an infinite on a few characters. Very strong move.

The A version has slightly less recovery, allowing a link into 214D for an extra star.

Delayed startup, but comes with extra forward movement and 1 hit of armor.

The club super. Completely invincible after the super flash, Mr. Heart sends out 7 spinning clubs, each of which can hit multiple times. About a second after all clubs leave the screen, 3 will fall back down from offscreen, one landing in each corner and one landing midscreen. If you can force the opponent to block this super point blank, it does an incredible amount of Guard Gauge damage, letting you set up a Guard Break if in the corner.

With two bars of aura, you can force an unblockable setup via the falling clubs. Use the first Kenpou Goroshi, force the opponent to block low, and then immediately perform another Kenpou Goroshi. While the opponent is stuck blocking low, the long screen freeze will let the overhead clubs come back down on the opponent and will combo them into the 2nd set of clubs.

The #1 command grab. Huge range, catches prejump, will OTG for combo extensions, and can do nearly 50% by itself. Huge use of aura, but if it hits its well worth it. Interestingly, this move is able to grab the opponent out of normally invincible moves such as DPs or supers.

Itteyo is the most important part of Mr. Heart's combo game, giving him access to a multitude of new options such as a wall jump, full horizontal air control, new special moves, altering the properties of BD throw and FKO allowing them to be combo'd into, and a constant single hit of armor. Unfortunately, in this state Heart both cannot block and is always running towards the opponent, making using it in neutral basically a death sentence and turning a dropped combo into a horrifying scramble situation, especially when coupled with its long recovery.

Launching command grab. Nothing too special but can lead to some decent combos, along with being a key part in Typhoon loops.

A wide aerial swing that knocks the opponent to the ground. Useful as part of Typhoon loop enders.

By far the best part of Itteyo. As the name implies, Heart becomes a spinning typhoon, bouncing the opponent up and around. Both versions are cancellable into other Itteyo moves on hit, and the grounded version is jump cancellable.

Another aerial command grab. Has no whiff animation, and can be used as an OTG after jB.

FKO command grab with almost nonexistent combo options. Sadly, it has slightly less range than 236236A and cannot grab prejump, along with a short amount of startup before it goes active. Thankfully, after the super flash appears, the opponent cannot do anything to escape. Best to think of it as an extremely high risk/high reward BD throw. 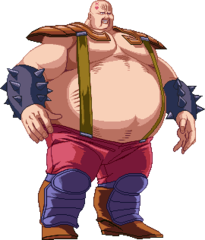 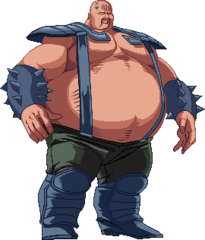 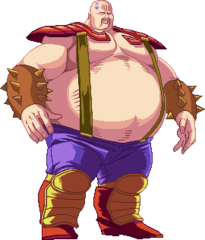 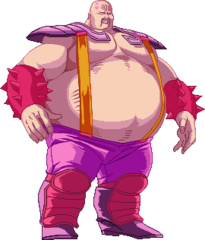 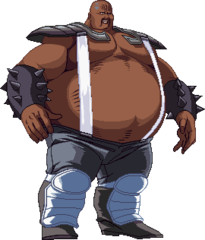