From Dustloop Wiki
< HNK
Jump to navigation Jump to search

Rei is a speedy, movement-based character, having access to a wide array of air moves and the ability to triple jump. He has very powerful normals, many being jump-cancelable, which allow him to keep up the pressure without the use of gauge. He has a strong defense as well, with a great uppercut reversal move as well as his Danko super, which essentially works to deny the opponent the chance to do a wakeup mixup on you. His star-taking ability is quite good, but he also has very practical 100% combos. While using Rei to his full potential requires a great deal of player skill and ad lib, he is also the perfect beginner character, with an easy to understand offense as well as relatively simple and damaging combos.

That being said, let us start this section off by listing Rei's main strengths and weaknesses.
Playstyle

Tied for one of Rei's fastest buttons. It is mainly used as used as an anti air against low airdashes and combo filler in midscreen combo routes.

Low kick that is a mid. Not much usage from this button due to it's lack of hitstun.

Excellent button for pressure with a lot of blockstun. Can go into instant airdash or 2D. Combos into banishing attack except on crouching Jagi where you would use 2D. Also combos into IAD j.B.

The other 5F normal. Same usage as close A but is smaller vertically. Whiffs on Mamiya, Rei, Shin, and Jagi crouch blocking. Whiffs on Souther and Toki neutral crouching.

Excellent midrange poke. Confirms into 2D except on crouching Jagi.

Not really used as a poke. Mainly combo filler.

2B is a great low. It's significantly plus on block, can be jump canceled, and has solid speed. It confirms into 5D and 2D. 2B > 2D does not combo against crouching

Rei's Fastest air normal. Good as an air to air.

A very active air normal that is great for air to airs and the fastest button that will hit a crouching character from an instant air dash.

Hits above Rei. Mainly used to hitconfirm from 2D.

Air to ground button that has a lot of blockstun and hitstun.

No real reason to use this but it's there if you want to.

Add a description to this move using the |description= field

Describe what the move is used for.

Excellent air to ground projectile with utility in: stalling in the air to mess up anti air timing, having an active projectile to follow behind in order force a response from the opponent and start pressure, and being a mixup tool with boost.

As it cancels into air special moves, one can use j.236C to follow up to get hits and create good corner carry for the Baskue.

While being a DP, it is also often used in basket combos by Boosting out the last hit.

Mainly used as a reaction to the universal guard cancel while still in the air.

Used as combo filler and an overhead option. Is airdash cancelable if at jump height. Wall bouncess on counter hit.

Rei creates a shield around himself with a hitbox that disappears when Rei lands on the ground, it hits, or is blocked. It eats some projectiles such as Souther's 623A.

A rushing mid attack done in the air that knocks up on normal hit and wallbounce on counter hit. Integral in all of Rei's combos by airdash canceling or jump canceling with a button and itself.

Reversal super with some invulnerability, great damage, and good hykuretsu combo potential. Attacks in the super can also beat projectiles.

Rei charges up the attack with one hit of armor, flies up with invincibility, and then throws 3 projectiles that bounce around the screen. Charging the super increased the damage and the duration of the projectiles on the screen.

A super mainly used to take as many stars as possible after A+C or 214C 214C at the end of a round. Has a little bit of invul that can go through guard cacncele but it isn't generally used in this manner.

If used too late outside of a banishing strike combo the gravity may be too severe for the 2nd hit too connect. 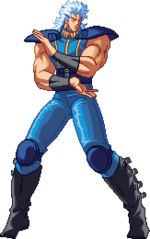 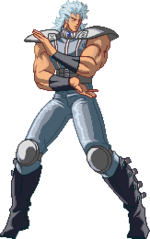 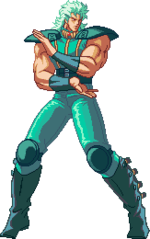 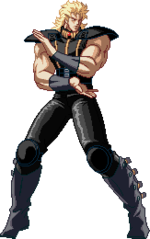 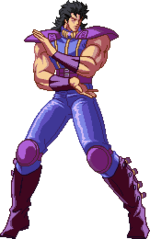