. However this is not a steadfast rule. Consult the Revolver Action section of your character's frame data for exact details.

Every character has additinal normals by pressing a direction + a normal that have special properties such as overhead, anti-air, or stronger longer reaching attacks.

Nearly every character has a sweep with

Drives are the unique abilities of each character in the game. Some Drives are atacks with special propeties: Ragna's allows him to regain life by hitting the opponent; Tager's magnetizes the opponent and pull them closer to him; and Carl's allows him to control a second character on the screen for tandem attacks. Other Drives do other unique things: Rachel's blows a gale of wind that affects some of her specials as well as her opponent; Tsubaki's charges a gauge that she can later use to power up some of her attacks.

B. Special attacks typically do 5% of their base damage as chip damage even on block (unless the opponent uses Barrier), but some attacks do higher percentages (most notably Amane's Drills).

Astral Finish is an attack that can instantly defeat the opponent. To use an Astral, there are certain conditions that need to be fulfilled first: 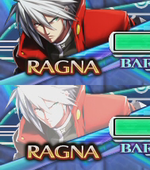 Because of these restrictions, Astrals are usually only used as fancy finishing moves to humiliate the opponent.

Throws are unblockable attacks with some restrictions in place.

To perform a normal throw, press B+C when near the opponent. There are 3 different types of normal throws: forward throw, back throw, and air throw.

Many normal throws can be canceled into specials and can net you a combo!

Command throws are a special type of throw that are performed like specials and supers like Tager's Genesic Emerald Tager Buster and Hazama's Bloody Fangs.

Command throws normally can not be escaped unless you use a command throw while an enemy is in hitstun or blockstun (or 6 frames immediately after either). In this case a purple throw occurs, which is escapable.

Throwing an opponent in CH state will result in a Throw Counter. A big red X will appear when you are thrown and "Throw Counter" will show on the side of the screen. Throws during CH state can not be escaped, but are otherwise identical to a standard throw, so it's safe to use throws as a punish tool!

If an opponent inputs a throw break (such as when blocking), then they will be unable to break throws for a while afterwards. This is used offensively by faking a throw (and getting your opponent to attempt a throw break), then instead making them block an attack, then canceling the attack into throw. The throw will show an exclamation mark with a red X overlayed on top of it.

The most common example of this is to 2A, run up pretend to throw, then perform a 2A > throw! If the opponent fell for the fake throw and entered a throw break, then they will be unable to break the 2A > throw. 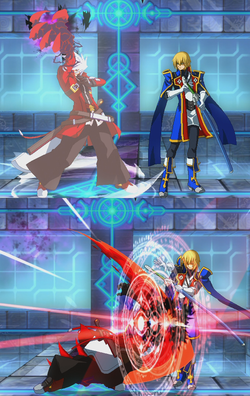 Guard Crushes and useful in combos to boot!

Crush Triggers cost 25 Heat and are performed by pressing 5+A+B while standing. If the opponent does not use Barrier to block the attack, then they will be Guard Crushed! Crush Triggers qualify as Special Attacks, which adds to their utility as a mixup tool because players can cancel into a Crush Trigger from most normal attacks.

Crush Triggers drain a portion of the opponent's Barrier Gauge if they Barrier block it. The amount of Barrier drained varies from character to character.

Crush Triggers are also very useful in combos and are often used mid combo. Some character's Crush Triggers force a hard knockdown, some ground bounce, others float the opponent very high. Whatever the case, they are all useful to help extend combos and deal more damage!

Crush Triggers ignore character combo rate and have SMP, so it's best to only use one per combo. 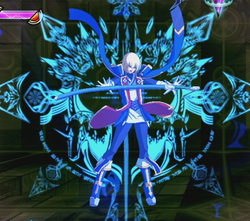 invincible startup! None Shall Escape!

Overdrive lasts longer the less health you have left

Press A+B+C+D while standing or airborne to activate Overdrive. Overdrive costs an entire Burst Gauge and places the character in a temporarily powered up state.

Overdrive lasts longer the less life you have remaining. The duration of Overdrive is calculated by the following table: 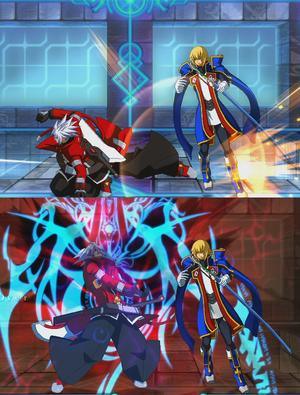 You can cancel into Overdrive almost anytime you could cancel into a Special Move. While this is indeed very powerful, doing so cuts Overdrive time by half! Oftentimes Overdrive Cancels can be used mid-combo to make a combo unburstable.

OD Cancel has startup 1+5, making it much faster than the normal version.

You will see the words "Cancel Over Drive!" appear on the screen when one is performed.

Overdrive Cancels are great for baiting Bursts! Bursts have 6F startup, so if one is performed at the same time as a Overdrive Cancel, the Overdrive's recovery will not be over when the Burst activates. However, if you get counter hit by an attack of level greater than 2, the hitstop will increase, and the Burst itself will take longer to start up. You can use this to your advantage by confirming the counter hit into a Overdrive Cancel so that you would completely recover before the burst hits, thus countering the Burst.

Accidental Rapid Cancel instead of Overdrive

Players that don't use button macros (or play in arcades) sometimes accidentally get a Rapid Cancel instead of an Overdrive by mistake because the button commands overlap. To bypass this problem, hold down A or B or C, then press the remaining buttons!

When you press a button, the game check if all 4 buttons are held down and if so, counts it as an overdrive activation. This means you don't need to press all of the buttons at the same time to go into Overdrive!

Make sure you're holding down A or B or C and then press the remaining buttons and you'll never accidentally get a Rapid!