From Dustloop Wiki
< P4Arena
Jump to navigation Jump to search

Like most arcade fighting games this game uses an 8 way direction joystick (or pad), and buttons.
There are 4 attack buttons in total: A (weak), B (strong), C (Persona Attack), D (Persona Rush).

Beyond your basic walk/jump/crouch commands, P4Arena has a variety of movement options:

Backstep. Backsteps move a preset distance and have a bit of startup invincibility. It is primarily used to avoid incoming attacks or as a last-ditch defensive option.

Air dash in the specified direction. Air dashes quickly cover a lot space, but you can not block while air dashing. This makes them high risk, high reward movement option.

Special commands in P4Arena are relegated to mostly

type motions to accommodate new players to the fighting game genre by removing the more complex inputs found in most other fighting games.
If you find yourself having issues executing these motions, go to training mode and perform the motion slowly until you're comfortable, then gradually perform it faster until you are comfortable doing it in a match; these motions must become second nature to you. One piece of advice is to try and emphasize the

when inputting the motion to make sure you end where you are supposed to. 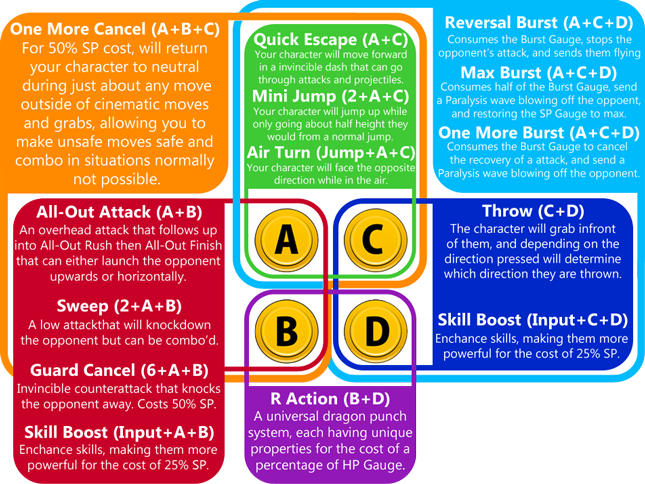 Ukemi
Press any button while on the ground to get back on your feet. You will be invincible while you ukemi. Occasionally players will delay their ukemi to throw off the opponent's timing should they try to go for a mixup or block string.
Air Ukemi
Hold any button while getting hit in the air and you will recovery with a bit of invincibility as soon as the blue bar empties. You can also hold

to choose which direction you will recover. Some players choose to delay their air ukemi to throw off the opponent's timing should they try to go for a reset or block string.