From Dustloop Wiki
< P4Arena
Jump to navigation Jump to search 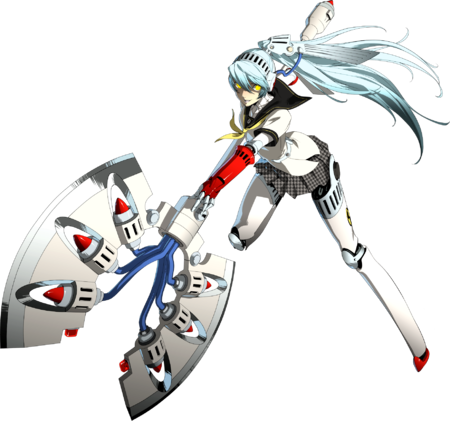 After Labrys was thrown into the TV World, Shadow Labrys and the fake school around them appeared, representing Labrys's desire to live and go to school like a normal girl. Shadow Labrys created the P-1 Grand Prix and masqueraded as Teddie to lure the other Persona users living in Inaba into it. After the player defeats Labrys, Shadow Labrys reveals herself before the player character and fights them. After being defeated, Labrys accepts her, gaining her Persona

Shadow Labrys swings the axe in a short range, but fairly fast attack. Staple normal for tons of combos. Jump Cancelable. Does not chain into 2A. Chain to 5B does not combo except on counterhit or air hit.

Shadow Labrys follows up the first attack with a horizontal swing of her axe. Lifts the opponent slightly off the ground.

Shadow Labrys swings the axe in an upward crescent, hitting very high up into the air. Launches the opponent upwards. Useful for combos.

Sweeps the axe in front of Labrys. Big poke, but somewhat slow. However, its recovers is fair, after it becomes active, making it safe as a distance poke against most characters. Chainable to 2B. Fatal counters, making it a good punish starter.

A very fast low hitting strike. Has very short range. Does not cancel into itself. Along with 5A, it's one of her fastest normals, but unlike 5A, it combos to 5B, and the 2A 5B 2AB series is a staple low chain. A useful tool for mixups, frame traps, and the like.

Axe sweeps a large arc above Labrys, and she is also lower to the ground during this so it is a very strong anti-air. However, it is very slow to start up. Jump cancelable only on hit, but is chainable to 5B. Fatal counters.

Slanted downward kick. Jump cancelable. Can cross up. Pretty weak, but fast, and cancels to j.B.

Swings axe up from below, hitting around Labrys in the shape of a "J". Fairly fast, can be easily used as crossup. Due to the combination of amazing hitbox, speed, and damage, this normal becomes a staple attack that Shadow Labrys can use for all sorts of reasons. Jump cancelable.

Followup to j.B, swings axe horizontally across. Causes wall bounce. Jump cancellable. 9 frames of landing recovery if not cancelled or recovering in air.

Based on her 5AAA normal. Can combo through with 2C or with One More! Cancel, but a combo off of Guard Cancel Attack can never kill an opponent.

A huge overhead swing that has very large range.

Shadow Labrys slides forward a little while sweeping her axe low in front of her. Bad on block, but usually safe if spaced well or they don't instant block. Not special or super cancellable.

At all times, Asterius has autoguard against moves with 400 or less base damage. If Shadow Labrys blocks, Asterius will stop doing any moves it's doing, except 8C (while underground only), SB skills, and Titanomachia.

A big punch from Asterius. Causes a long ground slide.

Asterius guards itself. Since he's always on-screen, this helps avoiding constant Persona Breaks. There is no difference between 5D and 2D, it blocks both highs and lows just fine.

Asterius sends a long wave of fire from its horns. Has deceptively great horizontal range, can serve as a good anti-air. On hit or block, it can be used to lock the opponent in place while you get in place to start a mixup. A staple move for zoning, pressure, and combos alike. If 2C is interrupted after it becomes active, the flames will continue as normal.

Asterius goes underground, then performs a huge uppercut. Tracks the opponent's location. Blows the enemy up higher on counterhit.

Grabs opponent and throws them to the floor, then slams her axe down into them while stepping on it. Can be comboed after with OMB or OMC, or Asterius attacks.

Throws opponent towards the wall. If close enough, causes wall bounce which can be comboed after.

Autoguard based F-Action. Shadow Labrys swings her axe upwards in front of her. Decent speed (15f) with a decent hitbox. Notable for how far in front of you it hits. On hit, the opponent flies diagonally away from her. On Counter Hit, causes an untechable wall bounce that you can combo after. It's easy to jump over, though, and since it's super armor the opponent can OMC hits against it or cancel to their own FA. While it's quite good, you should resist the urge to spam it.

Two hit axe slam, second hit must be blocked high. [Bracketed damage] for second hit is applied if the first hit does not connect. A good combo ender as well as a strong standing overhead you can use Asterius to combo after. Causes a soft, techable knockdown.

B Version : Slower, but higher damage.

SB version : Special cancellable, though unlike Labrys our only ground special move is Guillotine Axe. Can be comboed through if cancelled to Titanomachia as well. Can also be canceled into Furious Action.

Aerial axe slam. Spins in place for a hit, then slams downward. Slam must be blocked high. Canceling with OMC before hitting the ground allows for some very trick mixups, cancelling last hit to Titanomachia is useful in certain combos or setups. Final hit deals extra damage and blockstun if travelling a great enough distance before hitting the opponent, as well as causing a large groundbounce you can easily combo off of. Values in [brackets] are for this stronger version.

A version comes out fastest.

B version comes out slowest.

Asterius raises its hands, then hits the ground with both fists. Floorbounces, but is air techable. One frame after coming out, causes an earthquake that hits the entire ground LOW. Earthquake will not combo if they're hit by the fists, but will certainly still hit if they block the fists high.

Titanomachia: Floorbounce is significantly floatier than normal; combos into Titanomachia Finish on its own.

Asterius charges up and shoots a laser from his mouth, creating a pillar of fire at the point where it hits the ground, which blows the enemy upwards. The laser itself hits the enemy back into the pillar, but if it's done too close to the wall, the pillar is formed off-screen, so it can't damage the enemy. Effects will obscure Shadow Labrys, and she's almost impossible to see behind the pillar.

SB version : Slowest in both measures, but full autoguard, except against supers.

Titanomachia : As in D version, but attack comes out very quickly. Pillar combos into Titanomachia Finish on its own if the combo included a Fatal Counter.

Asterius goes underground, then quickly charges at the enemy, swallows them, then spits them out upwards. Opponent is ejected 89 frames after being eaten. If hit on this frame by All-out Attack, they're treated as though standing and All-out Rush can be performed. Other attacks consider the opponent as airborne.

D version : Whiffs up close but blows opponent higher upwards. Can be followed up in the corner.

SB version : Faster Asterius initiation, but has the same range as the C version. Full autoguard, except against supers.

Titanomachia : As in C version, but slower to activate.

Asterius gives a huge side punch to the enemy, hitting the camera in the process. A generic super combo finisher. But note, while Shadow Labrys is invuln, Asterius only has "Autoguard against everything but supers."

Shadow Labrys charges her axe for a while, then swings it for extreme damage. Has full autoguard.

B Version: MUCH slower, but travels full screen. Almost exclusively used as a combo move for after Titanomachia Finish. You can hold the button to delay activation, extending autoguard time.

During the super freeze, Shadow Labrys can input a string of up to three commands for Asterius. Afterwards, Asterius will perform the commands and end it with a full-screen attack that sets the area around itself ablaze with dark fire. Each special move has unique version for when done through Titanomachia; you can't use different versions of the same move separately. If no commands are inputted, then Asterius will go straight to the full-screen attack. During Titanomachia, Asterius has full autoguard, except against supers, for the entire duration. Hitstun scaling is not applied to Asterius' moves during Titanomachia.

When activated, a timer appears by your SP Gauge. You have until the timer expires to perform a ground command grab instant kill.

Press 222A+B to perform the command grab. If successful, Shadow Labrys drags her opponent down to hell and leaves it to Asterius to finish them off. You can attempt the throw as many times as you like while the timer is still active.