One of the mechanics of P4U2 that sets it apart from many other games is that you and your opponent can inflict ailments (also known as status effects) on each other during the match, similar to the original RPG. Most ailments last for approximately 4 in-game seconds, and can be removed if the character with a status effect hits the opponent with an attack.

You can be afflicted by up to 3 ailments at the same time, so watch out! If a 4th ailment is added, then the oldest ailment disappears.

As of P4U2 2.5, the character can now block either direction with either direction, eliminating left-right mix-ups during the status and the risk of the player blocking the wrong direction once the status wears off.
Panic disappears after a set period of time or until the panicked character hits the opponent.

When a character is afflicted with Fear, the first hit of any combo automatically becomes a Counter Hit, and specifically causes Fatal Counter. Their ability to break throws will also be removed, and they will receive more damage from Ghastly Wail supers.

Fear disappears after a set period of time, or until the afflicted character hits the opponent.

Rage (sometimes called "Berserk") disables blocking for the enraged character, but increases their attack power by 20%.

Unlike most other status effects, Rage only disappears after a set period of time - it does not go away if you hit your opponent!

Mute (commonly called "Silence") disables persona related abilities for the afflicted character. This includes things like C and D attacks, Bursts, and some specials and supers.
Mute disappears after a set period of time, or until the muted character hits the opponent.

Shock (sometimes called "Paralysis") disables movement (walking, jumping, airdashing, etc) for the afflicted character. Note that Evasive Action, Hop, Air Turn, Ukemi, and attacks that automatically move the character (such as Chie's Dragon Kick and Mitsuru's 5B) are still usable while paralyzed.
Shock disappears after a set period of time, or until the shocked character hits the opponent. 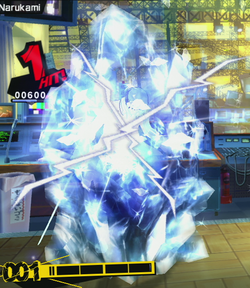 Frozen characters are encased in ice where they can be comboed by the opponent. Once hit, they will automatically break free from the ice (unless they are hit by another attack that can freeze them!). Freeze lasts for 3 seconds, but can be shortened by rapidly pressing left and right, though there is a minimum amount of time you will be frozen which is specific to each attack.