Button priority in this game goes

, where the letter to the left takes priority over any and all letters to the right.

Because there are so many commands that are 2 or 3 buttons, the rules for determining what command you get is simple: The command that uses the highest priority button wins. One More! Cancel has highest priority if available.

Like most games, kara-cancelling for advantages is also possible in Persona. There are some rules in place for how they may occur, though:

In P4AU, most Persona normals are programmed to always face the opponent (and advance towards the opponent on their start-up, if applicable). This typically occurs and is meant to enable sandwich situations when the Persona is displaced.

Some other examples include Minazuki's long-range Persona normals; His 2C and 2D will adjust their attack direction at certain distances, so that if the opponent is too far away, Tsukuyomi will turn to face them with the attack.

You can use this principle of the Persona auto-correcting to face the opponent in another unique way in the air, via air turn. Many air normals have the Persona's origin start next to or behind the user, and have them advance towards the opponent while being called, which keeps them relatively close to the user when used conventionally. If you air turn away from the opponent however, this puts the Persona's summon origin closer to the opponent, while the Persona will still attack in their direction. As a result, it gives that normal longer range. This is very useful for many characters for both neutral and pressure, such as Narukami's j.C, Minazuki's j.C, and Margaret's j.2C. 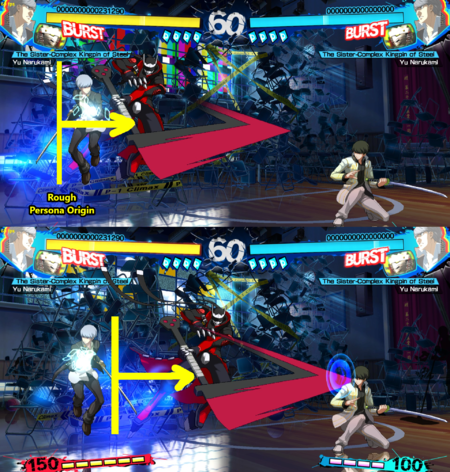 Notice how far Narukami's j.C reaches when he is air turned away from the opponent.

Cancels After Hitting a Persona

Hitting a Persona counts as the attack being "blocked" in terms of P-Combo canceling.

For example, Narukami's 5B can be jump-cancelled on hit only, so he will not be able to jump-cancel if the attack only hits the opponent's Persona, but he will retain all of his "cancel on block" options for 5B, such as backdash-cancelling.

Hold forward or down-forward when doing a ground One More! Cancel and your character will automatically begin running forward!

This is useful for combos where you need to get as close to your opponent as possible after a One More! Cancel.

This trick does not work for backdashes or air dashes.

You can combine dashes and attacks to both start coming out on the same frame in P4U2; when an attack start-up begins during the start of a dash, it’s referred to as a “sliding input” (direct translation). Your character will slide forward with dash momentum, and also perform the attack with no delay, while frame data doesn’t change on these moves if performed properly. This system is mainly in place to allow you to be able to perform micro-dashed attacks as fast as possible, instead of forcing you to go through at least 1F of dash/run before you can act like many other games.

It is ideally paired with the input buffer, to allow you to do strings like Narukami 2A

Guard:
AllStartup:
5Recovery:
12Advantage:
-2, and still hit the opponent out of their early airborne frames, when otherwise they would have been able to block.

The effectiveness depends on the characters initial dash speed. In this regard, Kanji suffers, and Yosuke does very well.

Notice the white circle on Yosuke?

When your character is invincible (either fully, or to a specific attribute) and goes through an enemy attack, you may notice that a white circle appears. This is to show that the character was invincible.

Note that this circle doesn't always appear: for example, a ground throw on an airborne opponent will not trigger this effect.

Some mechanics in the game depend on priority, notably same frame situations such as command throw trades. Character priority is determined by the latest player to strike the other, including with projectiles. The sprites of the character with priority will be displayed in front of the sprites of the lower priority character. This is inconsistent and priority can be gained or lost by doing actions such as walking or crouching.

Play+Record = Reset
Pressing both Play and Record at the same time is the same as pressing the Reset button.

There are a couple common conventions that are advised when it comes to playing P4U2 online, to ensure the smoothest netplay experience possible for both players.

The community agreed-upon netplay stages for P4U2 include:

Here are their images on the Stage Select screen (in the order mentioned), if you are not familiar with them: 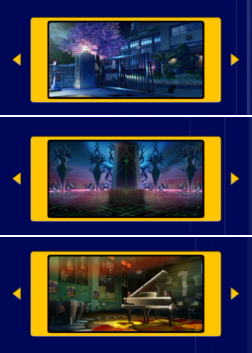 Additionally, when you and your opponent first load into a match, you should allow the stage/character intros to play out instead of skipping them. This allows the game some time to sync both players' games, so the beginning gameplay of a match isn't so laggy.

Finally, the most important of all: Please save all of our souls by plugging in an ethernet cable if you can! 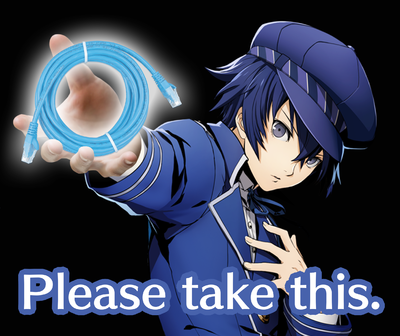 With the ease of posting videos and discussion to Twitter, it can be helpful to know how to track this information down. Each character in the game has a specific hashtag which people should aim to use when posting tweets for ease of searching. The current list of these hashtags is as follows: