Stop! Read me first!
The tier lists on this page are subjective in nature, and are the products of their individual authors. You can only trust a tier list as much as you trust its author.
Tier lists reflect the understanding on relative character strength at the time that they are written. Metas can develop and characters can change after a tier list is made.
Tier lists usually do not account for character difficulty, but that can sometimes be a factor depending on the author.
Depending on your goals and how competitive you are, tier lists may or may not be entirely irrelevant.

This section includes tier lists that have been made since the P4U2R re-release.

Gold is a Canadian Shadow Ken player from the P4U2R discord. Their tier rankings come with a short summary of the reasoning for each characters' placement. It is important to note, however, that the tiers are NOT ordered.

Kento is a Japanese Narukami player. Rankings are listed in a traditional tier list format.

YMST is a Japanese Shadow Mitsuru player. Their rankings this time come in the form of a tier list, though the rankings themselves are different than the traditional letter rankings.

This section includes tier lists which predate the P4U2R re-release by a significant amount. These lists are likely either outdated, or their authors are retired. They are included for the sake of historical record keeping.
That means don't use these to start arguments on Twitter.

This tier list is from May 2016.
YMST is a Japanese Shadow Mitsuru player. Their tier rankings come with both an alignment chart of character strength, and a traditional list. 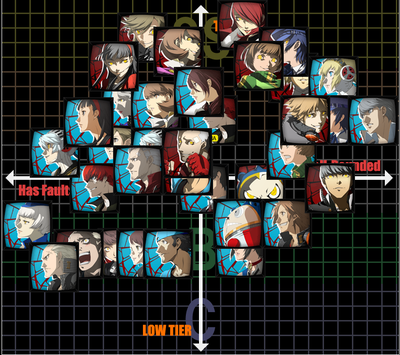 X-Axis: Ranges from having flaws to being well-rounded. For example, the author considers Narukami to be very well-rounded, but considers Elizabeth to have many flaws.
Y-Axis: Tier ranking, obviously ranges from low tier to top tier.