Exceptions
Some moves ignore the formula and build a specific amount of Heat (Which can be different for each player), usually none. For example, Tager's Gadget Finger builds 5 Heat for Tager, even though it only does 100 damage. Terumi's Drives build significant amounts of Heat for him while the opponent gains nothing from being hit by those moves unless he/she instant blocked. All moves that consume heat to use will also generate none for the attacker, but generate heat as normal for the defender.

After performing an ability that consumes the Heat Gauge (such as Rapid Cancels, Crush Triggers, and Jin's D Special Attacks), you will gain 75% less heat and auto heat gain will stop for a set amount of time (usually 180F). The time during hitstop and super flash count towards this as well, making "longer" moves less affected.

When your health bar is under 35%, you will slowly gain Heat automatically. Hakumen's meter will gain at a faster rate when he goes under 35% health. The Heat Gauge will continually pulse after you reach 35% health.

The rate of gaining heat for all characters are 11 heat unit per 10 frames: you will get 1 heat per frame, and at each 10th frame, you will get 2 heat instead.

Details about the Barrier Gauge is as follows:

Some attacks will ignore the "half-raw damage rule": such attack will usually require Barrier block or it will not be blockable. For example, Terumi's Screeches of the Condemned (Jarin Renshouga) deals extra 4000 barrier damage twice.

The number in the middle of the Burst Gauge is an approximate percentage (in 10% increments) of how full the gauge is. Details about the burst is as follows:

This increment is in real-time: meaning that any hitstop and superflash will not pause the increment. Active Flow multiplies the rate gained by 4 while it lasts. 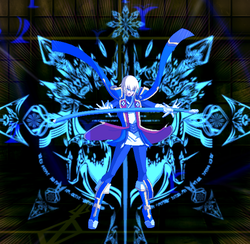 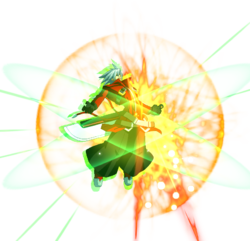 In order to get Active Flow you must reach 1000p while performing an action that is an Active Flow Catalyst. This meter resets to zero at the start of each round.