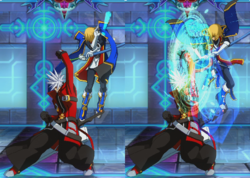 If you are in a relatively tight blockstring for over 6 seconds straight, you automatically begin instant-blocking all attacks and the words "Guard Bonus" will appear on the side of the screen. The blockstring can have gaps up to 4 frames long under normal blocking circumstances. This window doesn't apply the effects of barrier or instant block, so you can technically have gaps going all the way up to 7 frames long, all while still counting towards the 6 seconds. This is a relatively rare occurrence, and is sometimes seen with distortions or overdrive activations that have very long animations while keeping the opponent in blockstun (Bang's Furinkazan and Izayoi's Slaver Trans-Am, for example). 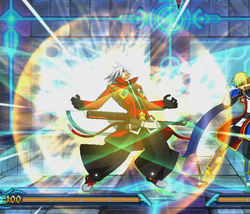 To Burst, press A+B+C+D while blocking or getting hit with a full Burst Gauge.

Bursts can be Disabled