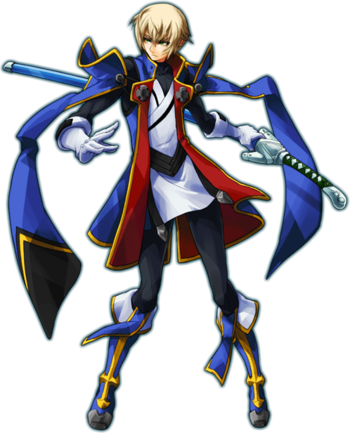 Jin is a Major in the NOL and one of its elite commanding officers. He is always cool and calm, but is also jealous, ambitious, and possessive with little care for others, treating them like they are mere obstacles. He displayed formidable actions to gain his rank during the Ikaruga Civil War. When he heard that Ragna the Bloodedge had arrived on the scene, he quickly abandoned his post to hunt him down by himself.

Jin also has access to a set of special moves that consume 25% Heat, similar to Force Breaks from Guilty Gear AC or EX attacks from Street Fighter 4. 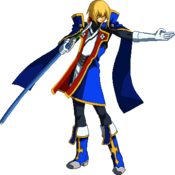 Great tool for it's range and speed. 2nd hit pulls in.

Good zoning tool, but can lose to mash if you're not careful.

The range on this move makes it an useful pressure tool.

Surprisingly long range for its animation. 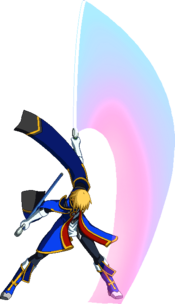 Long range, cancel to 5C to be safe. 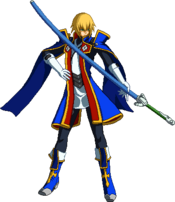 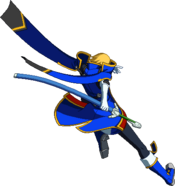 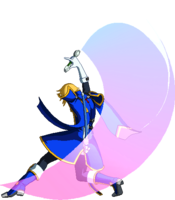 Very useful tool in combos, but it's also used to catch jumpers.

Quick startup makes it good for an air-to-air battle.

Hit above, in front, and below Jin. Has a crossup hitbox.

Pretty safe move to spam from far away. Primarily used for air-to-air.

Primarily used for combos and jump-ins. 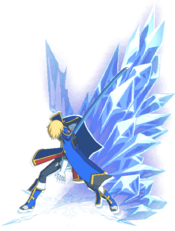 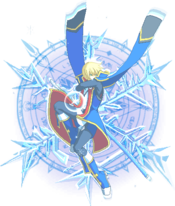 File:Jin623D.png
Dragon punch. Leads to good damage in the corner.

File:Jin214D.png
Really fast. Blows back very far. Can continue combo if near corner 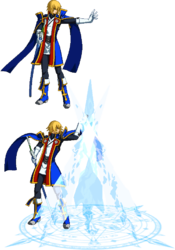 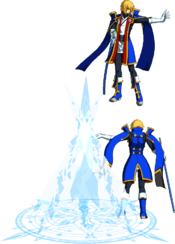 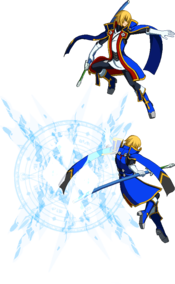 Has a variety of combo options depending on throw height.

File:Jin236A.png
Zoning tool. C version can be for oki in the corner.

File:JinJ236D.png
Shoots only one projectile depending button pressed. Can double jump if performed high enough.

File:Jin623A.png
No invincibility, but very fast. Can not hit crouchers.

File:Jin623A.png
Some invincibility, but not on frame 1. Can not hit crouchers.

File:Jin623C.png
Invincible from frame 1 through all active frames. Very slow.

File:Jin214A.png
Mostly useless. Don't mash it like most scrubs.

File:Jin214B.png
Combo ender.Use it when you can't use the C version.

File:Jin214B.png
Combo ender. Ground version goes high off the round. 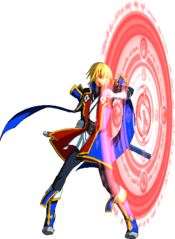 Doesn't catch low attacks (but it does next game!). 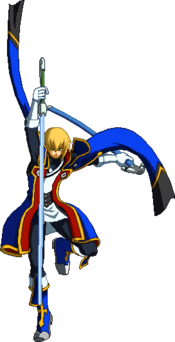 - = normal gatling or perform the move after preceding move's recovery
> = cancel into followups of the special move
jc = jump cancel
hjc = high jump cancel
dc = dash cancel
CU = cross-under (mainly for 3C after Straight Punch)
(N) = only use the Nth attack of the move (for example, if 5D(1) is written, you only use the first hit of 5D)
(text) = whatever's listed in the parentheses is optional
Blue text = opponent must be crouching for combo to work
Red text = requires 50 heat in order to use the combo
Purple text = requires both crouching opponent and 50 heat
Green text = combo is character specific; check the notes to see who it works on
Turquoise text = requires crouching and is character specific
Yellow text = Fatal Counter combo
Orange text = requires Fatal Counter and 50 heat