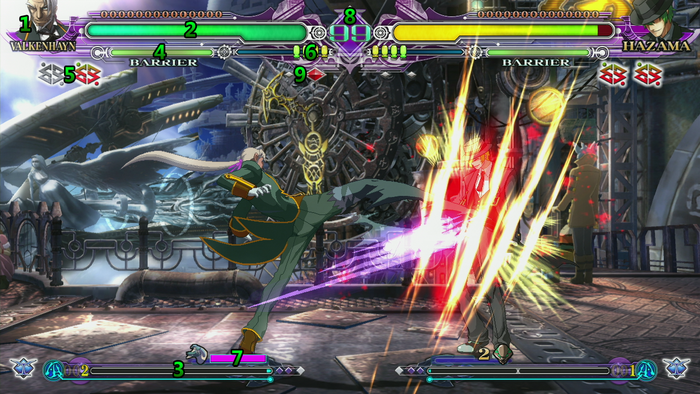 Here is the character's Heat Gauge. When you connect attacks, take damage, Block and Instant Block attacks, your Heat Gauge will fill, when the gauge fills to certain amounts, you can perform certain actions that require heat usage, refer to this for more information about Heat Gauge Usage.

Here is the character's allotted and remaining Break Burst Icons. The Monochrome Break Burst Icon cannot be used until you lose a round (Double Downs do not count since it's counted as a victory for both players). Icons in color can be used to Break Burst at the cost of losing an Icon and half of the character's Guard Primers, rounded to the lower number (ex: 5 goes down to 2).

If a character has any mechanic that requires their own gauge, this is where that gauge will appear (ex. Ragna's Blood Kain, Arakune's Curse Gauge, Relius' Ignis Gauge, Tager's Spark Bolt, etc), refer to the individual character's page to know what gauges they have and their requirements.