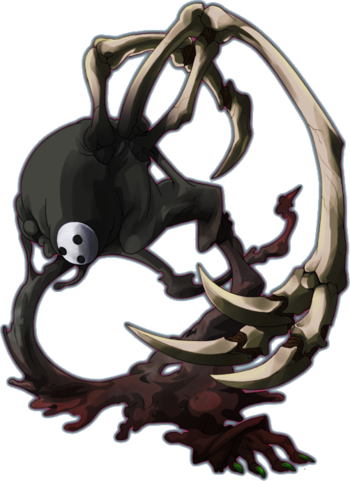 A Sector Seven scientist turned blob after insane exposure to the boundary, now with thousands of bees inside of him, he haunts the city of Kagustuchi in search of the Azure. In terms of Gameplay, Arakune is a very awkward character with awkward attacks, awkward movement, and an awkward playstyle. The main goal is to put your opponent in a "Cursed" State and deal big damage along with extremely safe block strings, cross ups, mix ups and even an unblocklable here and there. This is the offset to a very weak character without curse with lackluster pressure and mix up, and mediocre and predictable defensive options.

Drive: Crimson
Crimson is the system that calculates curse meter, how much is needed to curse an opponent, what attacks inflict how much curse meter (more details on this below), how long curse lasts, and the cap of meter gain after curse ends. During curse, Arakune can summon a variety of bugs that helps his pressure, comboability and damage. Curse lasts for roughly 14 seconds. Each bug has a cooldown before it can be summoned again (more details on this below) and Arakune cannot summon bugs when he is taking damage or in blockstun (but he can summon bugs in the few frames that he is not in blockstun in usual blockstrings). When the curse gauge depletes while bugs are hitting the opponent, any attempt to rebuild curse meter will be capped at 50%. There is no cap if bugs hit the opponent after the gauge is already depleted.

Once the curse gauge reaches 100%, it's time to summon bugs, these bugs change the entire scope of Arakune's combo potential, creating a variety of options off of the simplest hits. Although powerful, they are not invincible, as all bugs vanish if Arakune takes a hit, and there is a cooldown between re-summoning each type of bug. The fun stops when the Curse gauge depletes, which is about 14 game seconds after it starts. Do what you can during that time, with good execution, you'll be happy with the outcome. 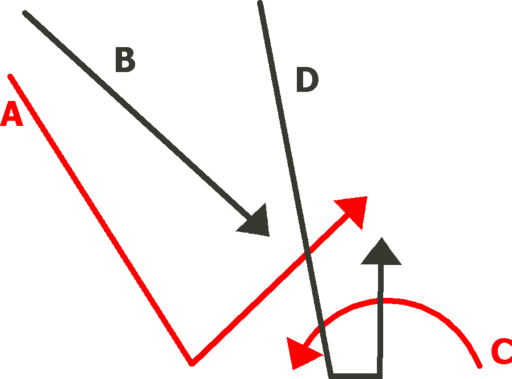 Hold left or right when summoning to shift the bug's trajectory.

The general idea of Arakune is to be passive-aggressive pre-curse, and crazy as hell during curse.

Offensively, your best friends are going to be j.b and 5a, these are your main pokes. 6a only when you condition them right. 5a > 2a is good for mix up, jump cancel when you need to, most of Arakune's attacks are jump cancellable. With good execution, rising j.b > j.4b (rising j.b > IAD > j.4b) is excellent for pressure and is one of Arakune's most dangerous pre-curse mix up. Outside of that, Arakune's offensive front is kinda weak pre-curse, but once you have curse, you're the prom queen and the world loves you. You get the opponent to block (or get it), and you go into a curse set up, then a curse combo, from there, depending on a few factors, say opponent has low health, if you are or are not running low on curse meter, you can go into a DD or attempt a reset or if they are in the corner, do the unblockable reset. Arakune's overall offense is a mix of these two.

Arakune's defense is weak. No DP, no reliable AA, a nerfed backdash, when it comes to Arakune's defense, the name of the game is evasion, do what you can to avoid having to block anything, use your command teleports, back dash, forward dash, wall teleport, all this, use the distance to set up your zoning game. When it comes down to it, you have to know how to block, learn what you can IB > backdash or punish.

Before you lay the smackdown of their candy asses, you need to mix them up and confirm into a curse combo. Since CS1, Negative Edging (abbreviated at NE) is not as important to Arakune's gameplay as it was in CT, most set ups can be done with little to no NE'ing, but there will be times when it might be necessary, either to zone, do a combo or to do a set up. Whenever you see [brackets] in the notation, that means to NE the bug. If you see ]reverse brackets[ in the notation, that is telling you to do a different command (4/5/6) and press the given button (or release it if you're NE'ing) while the recovery of a different attack is taking place (Ex. 4b > ]5cd[ ). Once you hop in training mode, you'll get the timing of NE and releasing down. The time when the bug hits will be indicated directly in the notations for instance, take the first combo. [6a > 5cd > c bug > d bug 1/2] You would have to press D during 5c, even though nothing happens immediately, you are actually summoning the d bug, which hits later in the combos, since the d bug has two individual times of connecting with the opponent, it's broken down to "d bug 1", when the d bug if descending, and "d bug 2", when it takes flight. When you see "d bug" without numbers, that assumes that the entire d bug does it's thing without anything in between.

To understand mix ups to their fullest potential, refer to the gatling table in the frame data

Brackets 1-3 can be done in any order

Corner Version. Brackets 1-3 can be done in any order

*This is the combo finisher and it can consist of whatever you want, if you want to replenish you curse gauge, here is a good time to do so, but if the combo consisted of bugs while curse was active, then the gauge caps at 50%. If a combo starts because bugs hit after curse became inactive, there is no cap. If their health is low, you can finish the combo with 6a > 5c > 236236c > 236236c.

Watch these videos for a demonstration of a few of these and more.

If you have 100 heat after curse ends, you can also perform a re-curse. Re-curse is very difficult, you end the combo with 6b > j.214214d > RC j.b (all hits). The scaling on j.b forces them to get out of the stagger early, but due to the properties of f.g, being unblockable once it hits, it resets the combo counter and does 100% curse.

Bear in mind that although this video is CS2 footage, it is still applicable in CSE, noteworthy differences is the guard primer breaking, which only removes 2 primers instead of 3.