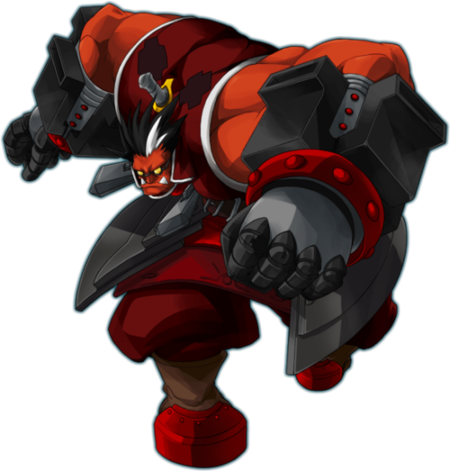 Iron Tager is a Sector Seven professor who has been mechanically enhanced to perform field-work. Originally the leader of a Sector Seven assault team sent to retrive Nirvana in the 4th Hierarchical City of Naobi, Tager suffered a mortal wound during the mission, and due to being the only survivor, was forced to withdraw. He was revived as an enormous cyborg by Kokonoe, whom he pledged loyalty to afterward. After his revival, he bears a similar resemblance to a demon, which resulted in him dubbed as the "Red Devil of Sector Seven". He is feared by many, but in truth he is very calm and calculated, only engaging in violence when necessary.

Drive: Voltic Battler
Tager can magnetize opponents for a small duration by landing these attacks on hit or block. If the opponent is already magnetized and gets hit by a magnetism attack, the duration increases (max 960F). When the opponent is magnetized, certain attacks will pull in the opponent. The magnetism duration normally reduces at a rate of 1 point per frame, but if Tager is taking damage, the rate changes to 1 point per 2 frames (when Tager performs a tech, the rate goes back to normal). Magnetism duration does not decrease during superflash or hitstop.

In addition to magnetism, Tager has an extra gauge: the Spark Bolt Gauge. This gauge fills up at 1 point per frame (freezes during hitstop and superflash) and has a maximum of 1200 points. When the gauge is full, Tager can use the Spark Bolt attack.

Tager's strength is in his unintuitive and fast mix up. Throws are much faster than overheads so sitting and waiting to react is not an option. Your opponent is forced to make guesses sometimes even when you're the one on defense. Play smart and think hard to win the battle of wits that ensues.

Mix Up After Gadget finger(22D):5A, strong and relatively safe option. It stuffs pokes and jumps. On block it leads to another mix up and you'll recover safely if they backdash (and vs some reversals!). Collider still gets more damage on a predicted jump, but 5A is much safer.

5C, one your tools for punishing backdashes. Depending on the back dash it might require some delayed timing, but it is a decent starter that is easy to combo from for good damage. It is relatively vulnerable to other options, but beating one of their safest options time to time is important.

22D, one of the most randomly useful follow ups. If you GF immediately it'll come out after a successful GF. It beats some jumps, some back dashes and even some moves, because it catches airborn opponents. Definitely not a universal option, but it is the only way to catch certain backdases (Lambda Arakune).

Low/Throw mix up Off of a blocked 5A, 5B, or 2B Tager can chain into a safe 5B or 2B with no gap or go for a tick throw. If they suspect a throw and they mash backdash, hold jump or buffer a reversal then they aren't blocking low. Since there is no gap, if you go for the low they just get hit! This mix up can also be done with 6A>3C (and technically 5C>3C if you're really close), but 3C has worse combo potential and isn't as safe on block even with the new special cancel. Remember than 2B and 5B chain into each other without limit so you can reset the mix up off the low if you're close enough. You can even slightly delay the low to confuse them.

In neutral Tager doesn't have much to work with defense wise, he doesn't have spark bolt at the beginning of the round and his anti air's are situational. His ground footsies are decent to bad depending on the match up. On normal rush down characters 5A, 5B, and 5C are the normals to use more for 5A and 5C good range on both and great depending on the spacing. jumping when someone runs in works on occasion but some characters can use 5A to anti air you for it.

Once they have you in a block string Tager's primary defensive options are:

Instant Block, Important for any character, but if Tager can create a big enough gap then your opponent has to risk 360A/720. Trying to avoid this throw often puts them at risk for other attacks like collider, or at least puts a break in their pressure.

360A, Aside from the above mentioned use, 360A has another distinction on the defensive. If you see a slow grounded overhead, rather than blocking it is much better to stuff it. Tager doesn't have much in the way of fast moves, but 360A goes invincible after only a few frames which gets the job done. 360B is more vulnerable but more damaging if you can use it.

Backdash, Good, but not great. It has a lot of invincible frames, but it is still vulnerable at the end for a good chunk. Since the backdash takes so long you have to either do it early (Not something you can control if they are already on you) or only against moves with very bad recovery. Otherwise you're likely to get punished when they recover before you do. Still it gives you the chance to punish predicted DPs and other long recovery moves easily.

(Instant) Barrier, The increased push back for instant barrier is noteworthy. characters often whiff their next move in a guard string if you properly instant barrier. The frame advantage on a whiff is always significant. Tager also benefits from magnetized punishes or 720 follow ups if the resources and/or spacing allow it.

A/Bsledge, Has some use under pressure. Several characters use projectiles in block strings, but some times they are covered with normals (Carl does this well). Still this option should at least make them think a little harder about it. Bsledge is very slow and should only be used against projectiles with a lot of recovery like Ragna's Deadspike. Asledge isn't exactly fast either, so don't get over confident.

Note:Tager has a long jump start up, so jumping out of pressure won't typically work and situations it does work in you usually could have used a throw or collider.

- = normal gatling or perform the move after preceding move's recovery
> = cancel into followups of the special move
jc = jump cancel
hjc = high jump cancel
dc = dash cancel
CU = cross-under (mainly for after A Ice car in the corner)
(N) = only use the Nth attack of the move (for example, if 5B(1) is written, you only use the first hit of 5B)
(text) = whatever's listed in the parentheses is optional
Blue text = opponent must be crouching for combo to work
Red text = requires 50 heat in order to use the combo
Purple text = requires both crouching opponent and 50 heat
Green text = combo is character specific; check the notes to see who it works on
Turquoise text = requires crouching and is character specific
Yellow text = Fatal Counter combo
Orange text = requires Fatal Counter and 50 heat