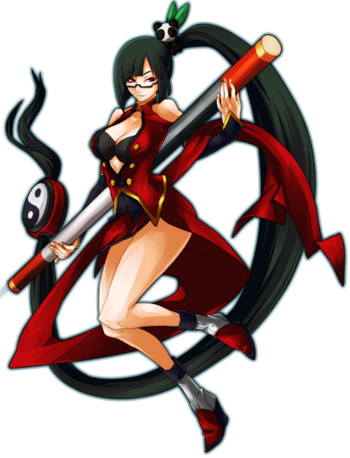 Drive:Matenbou - Litchi has the ability to place her staff with D, changing her moveset and giving her new pressure, mixup, and movement options.

Litchi is a rather involved character, but in the end, her goal is simple - you want to knockdown your opponent in the corner, and mix them up until you win. The longer you play midscreen, the more difficult it is to do damage, and consequently, win with her. In Extend, her corner carry off regular hits is somewhat weak, but her corner carry off specific moves and counter hits is very good. You'll need a strong neutral game in order to succeed with Litchi.

Litchi has a very strong neutral game, she only posses a disadvantage against a couple of characters in this regard.

The foundation of her neutral game is proper use of her staff pokes. Her 5B[m] is a pinch slow, but can be hit confirmed into 6C[m] on counterhit. If you choose to do this, buffer an IAD during the 6C, as it's only jump cancellable on hit. On block, confirm the situation and put down the staff/adjust to the situation.

Her guard point is an extremely strong move. Most characters have short low attacks. This means they'll have to dash in farther to attack you, which will leave them open to get counter hit by a 5B[m]. The guard point is also a good preemptive anti-air, as the A follow up hits behind her as well.

Litchi's 5A hits high and far in front of her face, making this her prime anti-air. Confirm it into jA on hit. The damage is low, but you get knockdown off it (though the opponent will be full screen).

Litchi's crouch is very low - you can use this to make preemptive jump attacks whiff. Follow it up by standing and hitting 5A, or hitting them with 2A > 2C > whatever the situation calls for.

Litchi can also put the staff down with 5D or 2D, giving her a full screen projectile. The staff launch (done by hitting 5D or 2D once the staff is set) hits 2 times, has a good amount of blockstun, and has counter hit carry, making it a strong tool. Although this can be used as an easy way to get in, an experienced opponent will be able to stop you, as Litchi has significantly less range when she isn't holding the staff. Using the staff as a projectile is a great way to pin someone down, rather than simply approach them. If you can get the opponent scared to do anything when you launch the staff, then you can approach them without fear.

Litchi has very versatile pressure game. Although she has two modes, the basic idea behind her pressure is the same - randomize what options you do to beat mashing, jump outs, then strike with highs, lows and throws. Litchi gets rewarded for counter hits -

You'll want to start by learning how to punish mashing and jump outs. If you stop mashing, it should be a counter hit, so it should lead to a corner carry combo (if you're midscreen) or big damage (if you're in the corner). Some prime examples -

If you can make an opponent afraid of your frame traps, Litchi additionally has many options to mix up the opponent. Her high/low game with the staff is admittedly lacking midscreen.

-4D has a long wall bound, but used as an overhead, it will simply knockdown midscreen.
-6A[m] can't be followed up without meter midscreen.
-3C[m] can only be followed be up at close range midscreen.

However, these attacks are not without benefits.

Additionally, you also have the option to throw. Use forward or back throw, depending on your position in relation to the wall. Once you have these options established, you can move on to one of her most powerful options - setting the staff. Litchi can cancel any normal besides 4D, 6D and 6B into her 5D and 2D (4D and 6D will set the staff after the move is over, in horizontal/vertical orientation, respectively). The foundation of Litchi's transition into staffless pressure is 5D, as it is 23F. For comparison's sake, both 4D and 6A are 22f, meaning that her 5D is essentially the same speed as her overheads. If you get your opponent to respect your frame traps, you can liberally use her 5D to extend pressure, leading to new ways to open up your opponent. 2D is 27F - it's a bit slower. It's mostly used to put the staff in horizontal orientation in neutral, but has a limited use in offense.

Once you set the staff, Litchi's pressure is pretty much the same, with a couple of important exceptions.

5D and 2D are a bit different. 5D and 2D are cancellable after 12 and 14 frames (respectively). The staff launches 2 frames after you relase D. So, if you hold D for a bit before launching the staff, you can make certain unsafe normals safe on block, and create strings that weren't possible before. An example of each -

-Litchi's counter assault is average at best. It can be low profiled by moves like Makoto's 2B or Tao's 3C.
-Litchi only has access to an invulnerable reversal when she has the staff.
-Litchi's backdash is one of the best in the game, as long as the first part doesn't get hit, you can escape to a safe distance.
-If you think your opponent will bait Tsubame Gaeshi, try to jump away and use Daisharin to get them off you.

Because Litchi can't rapid cancel her Tsubame Gaeshi, it'll take a lot of knowledge of not only what kind of strings your opponent's character has, but good analysis of how they play. Good use of Tsubame, backdash, counter assault, barrier, barrier jump, 2A, and proper defense will keep the opponent on their toes.

Despite not being able to rapid cancel Tsubame Gaeshi, the opponent will still bait it because not only will Litchi take high damage from a Counter Hit/Fatal Counter combo, but she will be without the staff as well, leaving her with less defensive options. Take care in when you choose to use it.

Litchi's forte. Litchi has a variety of meterless okizeme options that greatly limits an opponents options on wake up. If she has meter, she can use Kokushi Musuou for multiple attempts at high/low mixups.

This super is the core of Litchi's game. Getting this as a corner knockdown is Litchi's prime objective, as you can follow up with a high damage combo. There's a couple of ideas to keep in mind when using this super for mixup -

Kokushi mixup is all about high/low. Basic mixup is -

Unlike CS2, where Litchi could confirm random hits into one or two combo routes, Litchi has many more combo options this game. You have to be aware of position and initial proration more than anything else in EX. Ad-lib combos (as in, confirming combos off random hits) are very important as well. Unfortunately, there isn't any set way to do this or practice this - you need experience and confidence in order to confirm well. However, there are a couple of tools you may use often in ad-lib combos that will be listed after the main combo section.

Litchi's combos are rather weak midscreen of non-counter hits, but she's able to follow them up with safe setups that can push the opponent towards the corner.

Standard midscreen bnb. Litchi can do this anywhere. It doesn't do much damage but the knockdown is all right - you can punish rolls for decent damage and huge corner carry.

If you are close enough, you can follow up with her rekkas for a little more meter, damage and corner carry.

The lowest damage bnb, but gives the most corner carry and some unique mixup. Best when the 4D will put them in the corner, but doesn't bound the opponent.

Standard midscreen BNB that works on anyone, anywhere. You need to slighty delay the first 6C(1) to make this work on crouchers. 2C > 6C does not connect against Noel and Litchi crouching.

Use this when you hit the opponent near the corner. The corner carry on this combo is all right, it works from a decent range.

Pretty much, you get this only off 6B starter. 5000 damage if you end with slide 6A.

A starter such as multiple 2A's would qualify as a "worst starter".

The core of all of Litchi's combo enders. From here, you can go into Daisharin (to kill them or for setups) or Kokushi (for mixup). This is the single most important ender Litchi has, and the one that should be learned first. Against Mu and Lambda, you'll have to delay jC even more to connect with slide 6A. Vs Hakumen and Arakune, super jump jB > dj jBCD to make it consistent.

Combo into Tsubame Gaeshi. Although it's not as universally practical as the slide 6A ender, Tsubame Gaeshi does give a lot of meter, and the positioning the combo gives is useful against certain characters.

Rekka ender. Using the C follow up to the guard point positions the staff outside of the corner. Setups off this prevent the opponent from late teching/rolling out, and you get one attempt at high/low/throw mixup.