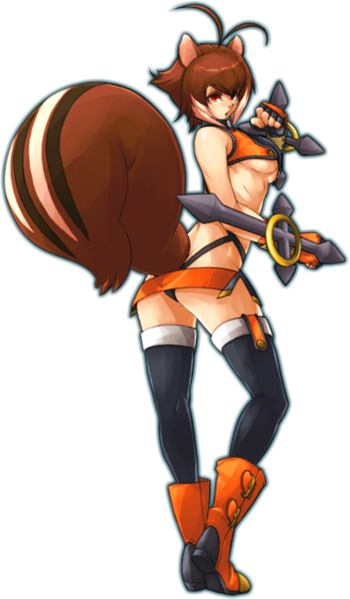 Drive: Impact
Makoto's Drive is called "Impact". All of her Drive moves have 3 different levels - holding down the D button charges the move from level 1 to level 3 and back down to level 1, while releasing the button executes her Drive for that particular level. Charging a Drive move to level 3 is usually preferred since they do the most damage and are usually better for continuing combos. However, lower level drives can exhibit some interesting and useful properties.

Makoto has many decently strong tools at her disposal in every area. However, she definitely does have exploitable weaknesses in certain areas or situations that Makoto players have to recognize in order to do well. For the most part, Makoto wants to be close to her opponent where she can use her decent frame traps and versatile mix-up to carry them to the corner and blow them up. She has trouble dealing with zoning characters who can keep her well out of threatening range while staying relatively safe (EX: Hazama, Lambda), or strong poking characters who easily stuff her footsies (EX: Ragna, Hakumen).

What is neutral? Long story short, it's when neither of you are in each other's faces but you want to be. Capcom fans refer to this as "footsies" - both players will intelligently and safely use their attacks while blocking or avoiding the other's, until one of them makes a wrong move and gets knocked down. Naturally, Makoto likes the knockdown part a lot more, but she still has to deal with this in order to win. Some characters have very good zoning, which is a lot like footsies except further apart (worse for you). So how does she deal with this?

There will be more generalized words here soon.

KNOCKDOWN MATRICES: Okay, so you landed a hit and executed some combo and now it's done. What do you do now? If you were midscreen then even her most damaging enders will net average damage off most starters. On top of that, many of them will send her opponent flying far away from Makoto, possibly reseting them back to neutral positioning where she has inherent disadvantage in many match-ups. Generally, you do not want that. The following is a comparison of all of her combo enders and the best times to use them both midscreen and cornered:

So what's the verdict? Midscreen, most combos on standing opponents end with 214ACC for the best damage and wake-up Okizeme. Crouching opponents should be juggled with 214ACB since it drastically increases damage. Midscreen air combos should almost always end with j623CD for the highest damage and passable Okizeme. In the corner, her Okizeme becomes MUCH stronger and pretty much anything goes. Mixing up her enders for different setups will keep opponents on their toes and make it easier to land mix-ups.

Makoto's most notable defensive options are Space Counter (46), Corona Upper (623C), and her backdash. 5A used intelligently can also be a strong defensive option for interrupting unsafe strings and mix-up. It is extremely important for Makoto players to recognize the strengths of all of her options, as well as their weaknesses, in order to identify when to use them and when to block.

As an example, lets take Valkenhyn. After Makoto neutral or emergency techs from a knockdown, Valkenhyn can use 2B to option select out of every defensive option except blocking. Why does this work?

1. Valkenhyn has frame advantage, which prevents makoto from using 5A or 2A to mash out of wake-up pressure.

2. His 2B has a very low hurtbox, while corona upper lacks a hitbox in the front-low area. If Makoto tries to DP, it will completely whiff and give him a free fatal counter combo.

3. His 2B hits low, while Space Counter can only parry mid and high attacks.

4. Makoto's backdash only has 5 invincible frames while his 2B has 4 active frames. Timed correctly, 2B will beat it and give him another combo.

Now, not every character has options this insanely good after a knockdown, but it does illustrate an important point - Makoto's defensive options are useful but ONLY WHEN USED WISELY. If you like to press buttons on wake-up, this is not the character for you.