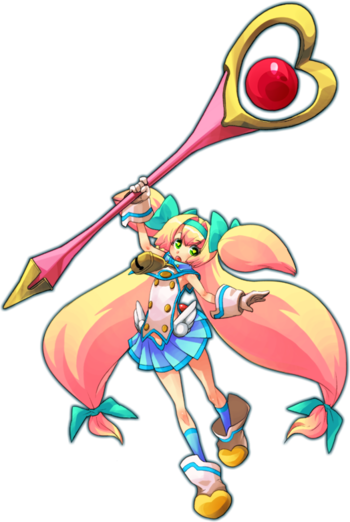 A young girl with three personalities. One is Luna, a brash girl with a tendency to being rude (particularly towards Ragna). Another is Sena, a timid, kind boy who often tries to pick up after Luna's attitude. Lastly is Trinity, one of the six heroes who's soul is sealed in her Nox Nyctores, and can only surface very briefly at a time. Platinum's gameplay is mostly rushdown oriented, but is also very dependent on what item she currently has via her Random Number Generator (RNG) based Drive.

Drive: Magical Symphony
Magical Symphony is the aforementioned RNG based Drive which allows Platinum to "equip" an item to use in battle. When the battle starts, Platinum will have an item listed as NEXT. This item has been generated randomly at the start of the match. 5D or j.D will equip this item, and will assign another item randomly as NEXT. Each item has a number of uses, or "tokens"; once the token counter has been used up, the item will vanish, and pressing either 5D or j.D again will equip the item listed as NEXT again. There is no way for Platinum to choose what item she would like to obtain (outside of Unlimited), but her 214D while equipped will throw her current item at a 45 degree angle, immediately using up all remaining tokens, and will be explained in detail later.

Platinum has a Distortion Drive called "Miracle Jeanne" which immediately throws away her current item for an upgraded version of the item listed as NEXT.

Platinum is a rather versatile character, with situational tools that can help her in various situations. Items like the Kitty, Missiles, and Bombs can help you in neutral while the Hammer and the Pan can help with your offense and opening the opponent up. The Kitty, Super Kitty, and Missiles are pretty good zoning tools. The random factor plays a role in which items you'll receive so you'll be praying to whatever deity that you receive an item that can help your neutral game at the start of the match.

During neutral, you'll want to poke with 5A, 2B, 5B, 5D (Kitty), 5D (Super Frying Pan), and j.C. 5A is really quick and hits crouching opponents, 2B has great reach and low profiles under a lot of moves, 5B has an amazing reach and can work as a situational anti air, and j.C has decent vertical and horizontal reach. The Kitty is situational and limited but it covers a pretty good amount of the screen and serves as an instant overhead. The Super Frying Pan is not only situational and limited but it costs 50 Heat to use. However, if you do manage to get your hands on this item, it will help your neutral game tremendously due to its range, hit-box, frame advantage, easy hit-confirms, and ridiculous damage.

If you get lucky and get the Missiles or the Bombs at the start of the match, you can use them for cover and getting in. Alternatively, you can use a Bubble to try and get in but you'll need an opening to use this move as it has quite a bit of start-up and recovery. Not only that but the Bubble can be popped by pretty much everything.

If you feel like zoning and have some meter to spare, you can try using the Super Missiles or the Super Kitty. These two will make the opponent wary of just when to push a button and they will have to act a lot more reserved. You can use that chance to get in and if they do push a button and get hit, then you'll get in anyways.

Platinum is a character who excels when near her foe and is very momentum based.

Once you manage to get in, you'll mostly be using 5A, 2A, 2B, tick throw, 6B, and Pan Rising j.D for basic pressure and mix-up. 5A staggers, 5B, 5C, Hammer 5D, and 6C for frame traps. TK Swallow, command throw, and IAD Hammer j.D once you condition the opponent into not wanting to mash/jump out.

Using pressure strings like 5A > 2A x N will prevent the opponent from trying to jump out as 2A (low) will tag them the moment they let go off down + back. 5A stagger pressure will help you fish for counter hits from mashy opponents. 6B and Rising j.D are your fast overheads here. Once you condition your opponent, you can use the slower stuff such as TK Swallow j.B or your command throw.

In the corner, you'll want to end your combos with 236B and use the Bubble as oki. You could also end your combo with 236B and do IAD backwards + j.4D Bomb and it will act as a sort of trap; if the opponent pushes a button, they'll get tagged by the Bomb and you can hit-confirm it for a combo.

Platinum has no real reversals outside of 1F invincible Bat and Cure Dot Typhoon, which means when you're on defense with her you have to be patient and watch for gaps in your opponent's pressure. Learning to Instant Block and Barrier is key for Platinum, and using Counter Assault if you don't feel confident in your execution using Instant Block > Cure Dot Typhoon.

5D Bat can be easily baited with a jump but you can use that to your advantage and have the opponent weaken their pressure with with jump cancels and bait attempts. You'll use that opportunity to escape from their pressure. 6A and 2C are your main anti-airs and 2B is your situational anti-air since it low profiles under quite a few air moves.

Plat's combos, like her neutral/pressure game, is mostly dependant on the item she currently has available. Midscreen, she needs an item like Pan to capitalize, otherwise she's doing low damage with moderate meter gain. In the corner, she can turn a hit from a decent p1 normal into 3.5-4k+ easily, with or without items. We currently have a very comprehensive combo guide done by Moy_X7 in the Platinum subforum.

- = normal gatling or perform the move after preceding move's recovery
> = cancel into followups of the special move
jc = jump cancel
hjc = high jump cancel
dc = dash cancel
CU = cross-under (mainly for after 22C midscreen)
(N) = only use the Nth attack of the move (for example, if j.2C(1) is written, you only use the first hit of j.2C)
(text) = whatever's listed in the parentheses is optional
Blue text = opponent must be crouching for combo to work
Red text = requires 50 heat in order to use the combo
Purple text = requires both crouching opponent and 50 heat
Green text = combo is character specific; check the notes to see who it works on
Turquoise text = requires crouching and is character specific
Yellow text = Fatal Counter combo
Orange text = requires Fatal Counter and 50 heat