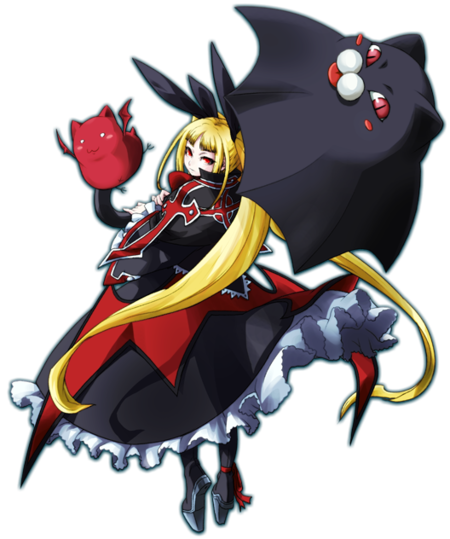 Head of the infamous Alucard vampire family, Rachel has spent countless years watching as the world repeated the same 100 years over and over. However, the world has finally broken free of the bonds that held it for so long, and Rachel is determined to put an end to Terumi with her own hands.

In the BlazBlue universe, Rachel is an extremely powerful individual, controlling wind and lightning. While she will rarely directly interfere with the events that surround Kagutsuchi, her primary goal is as an observer, and gently (or less so) nudges the pieces into their places. She has several servants under her command; Nago, a cat familiar, and Gii, a bat familiar, which serve as her weapons, furniture, and anger relief. Her butler, Valkenhayn R. Hellsing, is also notable for being a werewolf, as well as one of the Six Heroes.


You press D to make wind blow across the screen. You may put in a directional command to make the wind blow eight different ways. Wind affects Rachel, her projectiles, and her opponent.

Rachel has a gauge that indicates how much she can use Sylpheed. Her gauge has a max of four stocks that slowly regenerate as long as Rachel is on the ground. The longer she regenerates, the faster the rate of regeneration is.

This is the core of Rachel's game play. You manipulate the wind to combo, pressure, approach, run away, and be a general annoyance to your opponent.

Rachel is primarily a zoning character. All of her tools are designed to keep her opponent where she wants them. With proper placement, she can force her opponent to attempt risky approaches and then push them back out to reset her zoning tools again.

However, Rachel's physical game isn't anything to be trifled with. Due to her wind, she is able to deploy unseen mix-ups, such as instant overheads, which make for excellent damage opportunities as well as pushing her opponent back out for more zoning.

Rachel's defense game is fairly weak due to the lack of a good reversal, but she has some unique ways to improve it.

Her most reversal-ish move is her 2C, also known as cat chair. It has a full body guard point that absorbs one hit 5 frames after it comes out. However, the full body guard point doesn't affect throws, so she can be thrown out of it. Because the guard point comes out after frame 5, it's not really reliable unless you know your opponent will throw out an attack that has a big gap or startup. On CH you can use wind to combo afterwards. Refer to the combo section if you want to know more.

As mentioned earlier, Rachel has some unique ways to improve her defense with her tools combined with wind. A blocked 2C can be made safe with a pumpkin (214B). You won't see yourself often in this situation because the pumpkin disappears after you block one hit, but in case you ever do a 2C on neutral or when the opponent is approaching you for whatever reasons, it's a good way to commit them to attack you and eat a CH pumpkin that can lead into a nice combo.

Another unique defense option Rachel has is George (214A). George does not disappear on block, making him very useful to scare the opponent even though you are getting pressured. During gaps of the opponent's blockstrings you are still able to use wind. This is great because you can wind him directly in the opponent's face while blocking. Most opponents won't let George activate though because he disappears after you get thrown, no matter whether you break the throw or not. Keeping this in mind, prepare yourself to tech a (pink) throw after George is near your opponent.

Rachel's backdash itself isn't very good, but combining it with wind makes it a reliable backdash. You will almost backdash the maximum screen distance if you use wind. This is very useful in oki situations like Tager's gadget finger.

After a knockdown, you can use wind while you tech. There are many situations where this proves helpful, especially in the corner and after oki setups. If the opponent tries a meaty 2A, you are able wind tech in a way that lets you escape the corner. Some oki setups can be completely avoided and sometimes even punished, for example:

Though it's a good strategy to wind tech, your opponent is able to bait it in not doing his oki setups. It's not a big disadvantage because the only thing that happens is that you will find yourself blocking. Always keep in mind that you lose one wind stock though. You should judge the situation before you use wind tech. If you know for sure your opponent won't do a oki setup you can escape or doesn't go for things like meaty 2A in the corner, don't use wind tech. You only waste a wind stock and running out of wind hurts Rachel's game plan.

Apart from Rachel's defense options, you can also rely on the defensive system mechanics. Try to IB hits, push the opponent away with barrier or do a counter assault. Don't use a counter assault just because it's the easiest way to escape pressure though. Only use it if everything else fails. With 4 primers, Rachel can be guard crushed easily. Using a burst and a CA in one round reduces her guard primers to 1. This is a situation where running out of barrier or getting guard crushed is more or less guaranteed. Always try to avoid it.

Despite of having a weak defense game, her anti air is one of the best AAs in the game. It is not head attribute invincible like the most AAs, but has a guard point against head attribute attacks from frame 7-12, making it even reliable against air attacks with a huge attack box like Hakumen's j.2C or Ragna's j.C. It covers most of the space around Rachels upper body hitbox: vertically, horizontally and even behind Rachel. This makes an excellent choice if the opponent is trying to approach you from the air. Due to its great hitbox, you can even AA cross-ups like Carl's IAD j.2C or Jin's IAD j.D. On CH, your opponent can't tech until he hits the ground, making it very easy to hitconfirm with Dash > 5B. On block, cancel 6A to 5B and begin your pressure.

> = Next notation of attack

(NW) = No wind is required to do this combo

(text) = Whatever's listed in the parentheses is optional

Blue text = Opponent must be crouching for combo to work

Red text = Requires 50 heat in order to use the combo

Green text = Combo is character specific; check the notes to see who it works on

[*c] = close/point blank confirm, relative to the hitbox of the attack

[*m] = midrange confirm, relative to the hitbox of the attack

[*f] = long range confirm, relative to the hitbox of the attack

Notes: Doesn’t work on Ragna, Noel, Litchi, Lambda and Makoto. Requires a very hard mini-dash after 236B on Platinum and Hakumen.

+ 214B
Notes: Doesn’t work on Ragna, Noel, Litchi, Lambda and Makoto. Requires a very hard mini-dash after 236B on Platinum and Hakumen.