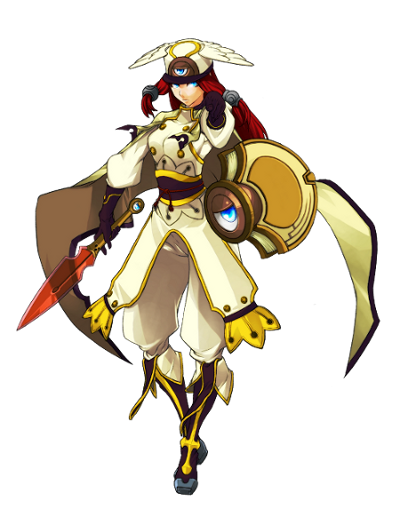 Devoted to training from an early age, Tsubaki developed tremendous combat ability. After graduating from the Military Academy, she took an active role as the Lieutenant of the organization known as the 0th Division. Following the events of CT, she travels to the city of "Kagutsuchi", to assassinate Jin and her former classmate and best friend Noel for deserting the NOL.

Drive: Install
Tsubaki’s drive is called Install. Pressing 5D, 2D, or j.D will cause her to “charge” her install meter. Holding the button on 5D, 2D, or j.D will cause charging to accelerate at a specific rate. Gaining and using charges effectively is key to being successful with Tsubaki. The D versions of her specials have properties that can lead to new mix-up options, damage, and combos which will be explained later. She can only hold a maximum of 5 charges at any time during a round and any left over charges will not be carried to the next round. Some of Tsubaki's normals can be "charge-cancelled" which is used to cancel the recovery of those moves. The normals that can be charge cancelled will are noted below.

Tsubaki also has a Distortion Drive called "Macto Maledictus" (214214D) or more commonly referred to as "Tsubaki Mugen/Install" which will use up all the charges that she has but will allow you to use as many D specials that you want for a certain amount of time depending on how many charges were used to initially start it. This distortion is an important aspect of Tsubaki that is far more practical in Extend compared to her other iterations due to how much more damage she gains, compared to how much damage she has normally, while using it.

Tsubaki's ability to delay many of her gatlings is actually quite useful for punishing IB specialists and mashing alike, you just have to know what options are available to you at the given time and predict the move of your opponent that you can punish.

Tsubaki has a good okizeme option with her 3C(C) especially now that it fatals. This is usually done mid-screen after a knockdown from 22X with a followup dash, though it can also be done in the corner. However, it's not as ambiguous as if it were done at mid-screen. Be wary of your meter to ensure you can still rapid cancel if you make a mistake due to it still being highly unsafe when blocked. You can also feint the second hit of 3CC to block DPs/reversals. Here's a good tutorial of her 3C(C) okizeme from BatousaiJ:

Tsubaki also has another decent oki option in the corner known as the "Tsubaki Matrix." This requires you to combo into a charged 22B > 6A in the corner, then link (not chain) 5B/5C after the 6A. This will result in the normal hitting either meaty in the case of 5C, or very close to meaty for 5B. Doing either 5B or 5C will beat out all mashing and jump-out attempts. If your opponent starts trying to late tech to avoid the situation, you can react and use 2B instead of 5C. If they delay their tech too much the 2B should hit them out of it, and you can confirm into 2CC > IAD from there but a really well timed roll will avoid the 2B. You can also do a throw after 6A, or just cancel the 6A into an unblockable. The 22B > 6A link should work with pretty much any combo still, as long as you aren’t using 22B twice.

Tsubaki also has a safejump option from 214B. This requires you to combo into 214B on an airborne opponent, then jump and use j.C whilst holding down-back. If your opponent DPs, the j.C will whiff, and you will be able to block it in time. If your opponent mashes, you will score a CH, and they’ll get hit out of their jump start-up should they try to jump out of it. If you opponent blocks, you can apply further pressure. However, this can be avoided by a well timed delayed tech > roll. This setup also works midscreen but is less effective due to the fact that it's easier for the opponent to escape, and bear in mind that this does not work on every character. Despite that, this is an especially nice setup once your opponent starts respecting it. Once you know your opponent is just going to block it, then you can start throwing in mix-ups like air dashing in and instead of actually doing the j.C, do j.C > delay > j.C/2B shenanigans, empty jumping then throwing, or basically whatever you want.

After j.C you can opt to do j.C(C) delay which will hit them as they block the first and then adjust their blocking to low as you look as though you're going to land. The delayed hit will hit them low to the ground and if they get hit by it, it goes into a full combo of your choice. If they block it, continue the pressure with 2A/5A. Another option is to jc and hit them with the first hit of j.C late and then immediately transition into 2B when you land which will amount to overhead into low in a quick pace.

Tsubaki has alot of really good resets both midscreen and in the corner. The majority of it requires at least one stock. One of the most famous resets Tsubaki possess are those of unblockable resets. This can be done either in blockstrings or you could even deliberately drop a combo to use this, but be advised that it is unsafe. 5B and 5C provide the most ambigious unblockable setups in blockstrings. Remember that her unblockable can even be followed up from any ground special. As for combos, some unblockable resets include:

Other resets Tsubaki has include that of 236D used in combos. The untechable time is quite short but you have the oppurtunity to reset the combo into a overhead or even a low. So for example: 5BB > 5CC > 236D > 5BB > 6A will force a reset if the opponent is not on their toes. Additionally, you can even do this: 5BB > 5CC > 236D > 5BB > Delay 2B which would work on those who may anticipate the overhead. In addition you can resort to an unblockable setup, or even charge cancel to go into a throw.

This is more beneficial to Tsubaki now as it maximizes her damage output with her drive specials. Because of this, it is very likely that you're opponent could burst right after you active it to waste your meter and damage opportunity. This can easily be avoided by using 214D right after Mugen. It'll evade the burst hit and you are free to hit them with 623D which can lead into the j.236D > j.214D combo. For Mugen combos, check out this video by Level5 - Chan:

Be sure check out this important note regarding mugen combos by BatousaiJ:

Tsubaki is one of the few characters that posseses a very reliable AA (2C), which makes her a huge threat to players who like to jump in. Even if it is blocked, you have the ability to jump cancel the normal to pressure the opponent, or simply to jump away.

Under pressure however, Tsubaki is unfortunately very weak. She does not have a reliable reversal, and her 623A/D are risky to use because of the lack of priority and invulnerability frames. This can lead to several trades, or even have you beat out clean. You may find it very useful to barrier block to push the player out. Use counter assaults sparingly. Tsubaki's lack of defense makes her an easy target for opponent's to remove her primers, and by using a counter assault, you may be making it much easier for them. Try to instant block too. It will easily help you to escape most pressure situations and you can also use it to have an easier time punishing the gaps in opponent's strings. In addition, use her great mobility to move around the stage to avoid being placed in disadvantageous positions. This involves alot of backdashing, jumps and air dashes.

Tsubaki does around average or low damage without charge (average of 1500-2000 damage per combo) with a few exceptions. However, whenever you charge, you make the sacrifice of not having an oki game and you lose all pressure/momentum you had on your opponent. In Extend, 2D and 5D are slower compared to how they were in CS2. However, j.D is pretty much the same and is the fastest way to gain charge in this iteration. Here are some setups in order to gain time/space to charge.

In addition, Surfeit managed to compile charge cancel frame data. The first set of numbers for each different normal indicates the frame advantage you are at without a charge cancel. The following set of numbers indicates the frame advanatage you are at using 5D on block, and on hit for both a standing (S) and crouching (C) opponent. These numbers are all under the condition that:

Tsubaki is one of the few who have extremely flexible combos in BB, so there are a lot of variations to each combo that are listed here. Also refer to the CS:EX Tsubaki Yayoi Combo Compilation Thread for more of her combos though new variations are being found so try things out!

Ex: 214D > 2CC > IAD j.CC > 5C > 2CC > 236B > 214B > 22C.
- This combo is height specific in that if it's too low the IAD j.CC may not connect and if done too high you will not land in time for the 5C to connect. The times you can mess up are not inputting the IAD correctly, not delaying the j.CC long enough, not hitting the 5B fast enough after the j.CC, and hitting your opponent too high or low from the 2CC. As with the DP whiff combos, the timings may be slightly altered depending your opponent character's hitbox. These combos allow corner carry from midscreen and can also be done in the corner and leaves her in a positional advantage after the combo is finished. Some tips for learning this combo is learning when you can jump cancel from the 2CC (the time you can cancel to the IAD is pretty late) and delaying the j.CC as long as you can without landing.

For visual aid on the Mugen effect for one charge, check out this video from BatousaiJ:

Credits: All the Tsubaki players over at Dustloop as well as the other members of Dustloop who helped translate the frame data and obtain the sprites.