As you combo the opponent, you will notice that each attack does less damage than they would individually. This is due to damage scaling, otherwise known as damage proration. To determine how much damage the second hit onwards in a combo will deal, there is a formula:

Once P2
Attacks with a (once) following the number for P2 will only apply P2 the first time the attack hits.

Exceptions
Some attacks ignore this damage scaling. For example Tager's Gadget Finger always does 100 damage, regardless of scaling. Most Distortion Skills do at least 20% of their damage. Multi-target Distortion Skill Duos do 2000 damage and single-target do 2500 damage. These values increase to 2500/3000 damage accordingly if performed during Cross Combo. See the Minimum Damage section for details. Some attacks also ignore the character combo rate.

The following actions all deal a minimum amount of damage on hit, regardless of proration: 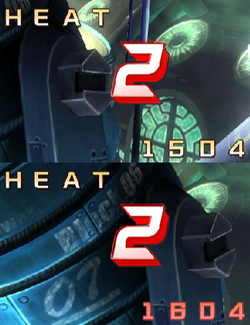 Currently, additional bonus damage can be added in only one way, that is, netting a counter hit, which increases the damage of that one attack by 10%.

In BlazBlue Cross Tag Battle (and most other fighting games), Skills and all variations thereof deal small amounts of damage even if they are blocked. This damage is all red health so it can be recovered by tagging out or using Resonance Blaze.

Characters from the Persona series use their Personas for various attacks. These Personas can be hit, and will deal damage to the character! Specifically, a character takes 2.5% of their max health as recoverable damage whenever their Persona gets hit.

How much hitstun decay is there? just look at the background! None (top), -10 (middle), reduced to 1 (bottom)

As a combo goes on, the amount of hitstun each attack deals is reduced as it reaches certain time thresholds. Unlike in CF, Hitstun/Untechable decay is only determined by the amount of time that has passed in the combo, and is independent of the combo starter:

You can tell how far you are into the combo by looking at the combo counter. The background of it will change at each time threshold. Players can use this to tell how far into a combo they are and cut it off early before the hitstun decays too much. The background even acts as a countdown timer! When you are 240F away from the next threshold, additional diamonds will appear in 60F intervals.

The first "hit" of a throw, including command throws, is always 0 damage. For these cases, the first damaging hit (that is, the second hit on the combo counter) is treated as the start of the combo with regards to hitstun decay. 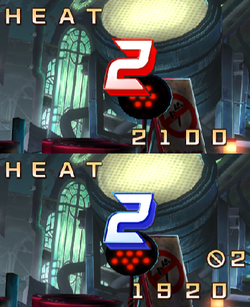 There are some situations on defense where you intentionally delay an ukemi to avoid a mixup. For example, some players do not ukemi against Tager's Atomic Collider grab in order to avoid being reset into a new combo.