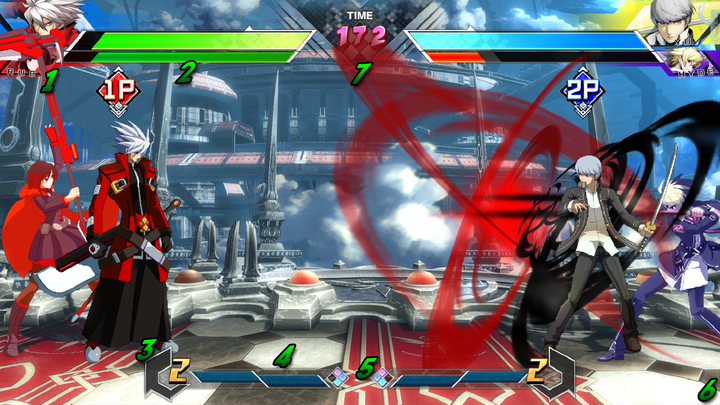 Each character on your team will have their portrait shown here. The point character will be shown first, followed by your partner.

In the rare occasion where all remaining character's health reaches 0 at the same time, the match is counted as a Double Down, and both player will have to rematch a final game. If a Double Down still occur during the rematch, both player are consider lost.

This gauge is required for Reject Guard, EX Special Moves, Distortion Skills and Distortion Skill: Duo. You start the match with 1 Skill Gauge. Under normal circumstances, you can build up to a maximum of 5 Skill Gauge. During Resonance Blaze, this limit increases by 1 for each level of Resonance. The Skill Gauge will increase when hitting an opponent and making them block an attack, as well as when your character is hit by an opponent or blocks an opponent's attack

This gauge is required for using Partner Skills while attacking, Cross Combos and Cross Bursts. It's divided into 2 parts with different mechanics use up a different amount of the Cross Gauge. The gauge starts fully filled at the start of the match and gradually recovers over time after usage after undergoing a small usage cooldown. When you are down to 1 character, this gauge will transform into the Resonance Blaze Gauge and it'll disappear after you activate and use up Resonance Blaze.

The Cross Gauge will briefly pause filling while your partner is on-screen.

This diamond shaped gauge is used for Resonance Blaze when it becomes available for use. The duration of Resonance Blaze will vary depending on how full this gauge is when you activate it. You start the match with 1 mini diamond in the top and can have a maximum of 4 diamonds. The gauge will gradually fill with the remaining 3 mini diamonds the more you use your Partner for stuff like Partner Skills and Cross Combos.

If a character has any mechanic that requires their own gauge, this is where that gauge will appear (ex. Rachel's Sylpheed Drive, Yukiko's Fire Boost Level, etc), refer to the individual character's page to know what gauges they have and their requirements. 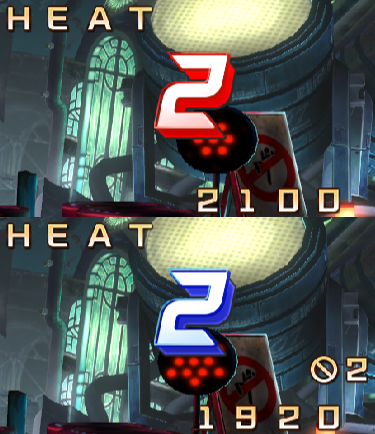 The combo counter. Notice that during an invalid combo the combo counter turns blue and the which hit was invalid is shown at the bottom right (notice the small 2).