How do I control my character???[edit]

This is the typical layout for Battle Fantasia when played at arcades, and on home consoles with arcade sticks: 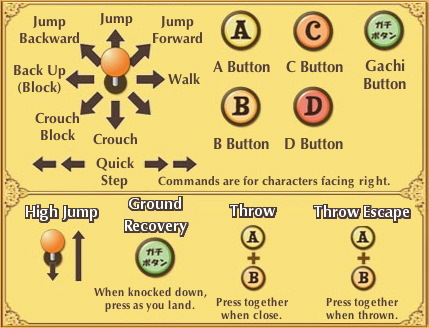 The Start button (not shown) usuall serves as a Taunt in arcades. Some home console stick layouts may utilize a sixth button below G (Gachi) to function as a Taunt, or on gamepads, it might be placed elsewhere.

Players use Numpad Notation when discussing the game online in order to all players worldwide to speak the same "language". This is extremely important when it comes to explaining advanced techniques, combos, etc.

Aside from the generic walk/jump/crouch commands, Battle Fantasia contains several unique options for movement on the playing field:

dash. In order to keep dashing, the

needs to be input again

will have you high jump in the specified direction. You can use

to high jump backwards, or

Dashing high jump. This is a very important tool as it allows characters to cover more ground than a regular jump would, and possibly avoid projectiles or traps from a further distance.

Forward air dash (Coyori only). Air dashes covers alot of space and allows Coyori to attack at a height lower than an average jump, but just like with regular jumping, the only defense option is to Gachi, making it equally risky. Coyori can air dash from any jump direction

Double jump (Odile in Heat Up only). With Heat Up activated, Odile can perform another jump in mid air. She can also use

after specific attacks
Jump cancel (Coyori and Odile only). Jump canceling can help characters stay safe after certain attacks, as well as provide alternate ways of opening up the opponent.

Special commands in Battle Fantasia are pretty easy. It shares many of the basic commands found in most 2D fighting games like

Ground Recovery
Right before you hit the ground, simply press G (Gachi). Your character will "tech roll" and regain his/her footing, returning to their neutral stance. Please note that all characters ground recover rolling backwards, and there are ways to force the opponent to roll towards you. Ground recovery only apply to Soft Knockdowns. Your character is invincible during recovery.
Throw
Press A+B to perform a throw. Holding

while throwing will perform a back throw, while

+ B + C will result in forward throws.
Throw Escape
Right as you're being thrown, quickly press A+B to break from the throw. Both characters will jump back from each other, preventing any attacks from occurring until they both recover from the animation.
Heat Up!
Press either A+C or B+D to activate a super mode where the character can gain unique types of boosts, such as super armor, enhanced specials, doppleganger attacks, etc. This costs at least 1 stock of MP to activate. Heat Up can be initiated while standing, crouching, or jumping.
Instant Heat Up
Pressing a button combination of A+B+D, A+B+C, or B+C+D will allow characters to perform an attack while activating Heat Up. This is very important, as certain characters can perform special moves going straight into Heat Up utilizing this technique.
High Gachi Drive (HGD or 6G)
Timely pressing

G against attacks will not only parry the move, but make the parrying character counter with a move that can make the opponent fly across the screen for a juggle opportunity. HGD does not always work against certain attacks, mainly light attacks, and specific ranged attacks like projectiles.
Low Gachi Drive (LGD or 3G)
Like High Gachi Drive, Low Gachi Drive works the same way, but instead of creating a juggle opportunity, the opponent slides across the ground, performing a grounded wall bounce and spins for a few seconds. This opens them up for stronger ground combos that can lead to juggles. LGD is similar to HGD in that it doesn't work against all attacks.