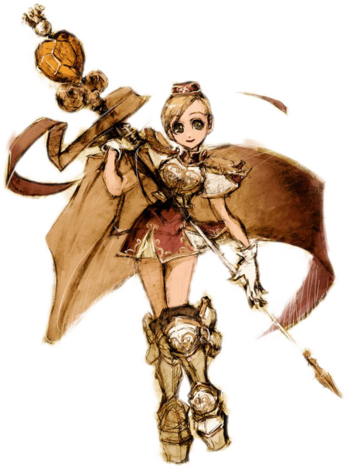 Olivia Von Roselia, age 17, is the princess of a small, rose-filled country called Roselia. Her mother, Queen Victoria, was one of the Four Heroes who saved the world from seemingly inevitable destruction years ago. The country shares borders with the two superpowers on the continent, Orgran and Baltana, and as such is subject to a great deal of international intrigue. This led to Olivia being kidnapped and cursed by agents of the neighboring countries as a child, but these hardships only helped her grow stronger. One day Olivia saw that the precious Miracle Rose had started to wither, an ill omen, and left the small kingdom behind in search of answers.

Health: ???
Play-style: Specializes in using graceful long-ranged attacks. She has a command grab which deals only 1 point of damage, but leaves the opponent open to combos.
Movement Options: ???

Heat Up
During Heat Up, Olivia summons a number of birds which peck at her opponent during some of her attacks, which increases damage dealt.

A slight downwards poke with her rod.

Jabs obliquely forward with her rod.

Raises her hand and conjures a small orb of roses.

A fast poke at the ground with her rod.

Bats her hand and conjures a small orb of roses.

A powerful headbutt that conjures a crowned heart.

Charged version becomes unblockable. During Heat Up, the birds will peck at her opponent first if charged.

Olivia flips forward and pokes her opponent with her rod.

A straight downwards poke with her rod.

Swings her rod downwards, creating orbs of roses in the process.

Grabs the opponent and pushes them away with both hands.

Rides across the screen on her rod.

A downward diving strike. If the button is held, Olivia will fake the attack, and instead hop into the air.

A command throw in which Olivia dances with her opponent, then kisses them, stunning them. This attack only deals a single point of damage, but leaves the opponent open for combos.

Starts out similar to Dainty Livi, a forward multi-hit attack with rod, finishing with a twirling strike.

Olivia twirls her rod around her body, dealing multiple hits.