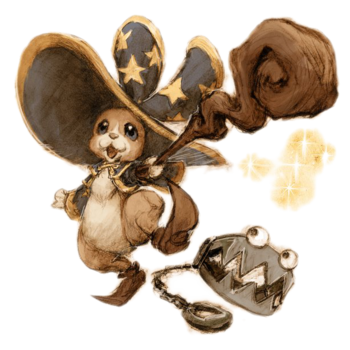 Watson Livingston, the Prophet of Light, one of the Four Heroes of the last war. He is in a position of great authority at the Royal Observatory, but uses most of his time unraveling the mysteries of the universe. Stargazing one day, he spots something worrying and reminiscent of the omens of the last great war. He sets out to find the Savior of Light, the one who will save the world.

Health: ???
Play-style: Specializes in using magic and has a few great advantages for being the smallest and lightest character in the game, crouching over some low attacks. What makes Watson stand out compared to the other characters is his Level Up mechanic. Each time the player uses a C attack 3 times, he levels up, which further enhances his magical abilities.
Movement Options: ???

Heat Up
During Heat Up, he gains the ability to perform Twinkle Dust, which is a falling meteor shower attack, after casting 3 times in rapid succession.

A quick poke forward with his ear-hat.

Summons a blue constellation which resembles a crab that attacks the opponent.

Overhead downward poke with his hat.

A crouching poke with his ear hat.

Summons a constellation which resembles a falcon bird pointed at a downward angle that attacks the opponent.

Leaps into the air and does what looks like an extended version of his 5D.

Spreads out all of his body parts, hitting the opponent.

An aerial version of his 5D.

Summons a constellation which resembles a Pegasus horse that attacks the opponent.

Similar to Marco's throw, sends the opponent spinning into a rear bump.

A bubble projectile. Depending on the button pressed, it flies at a specific angle. A version flies straight forward, while C version descends at a slightly downward angle.

A small size trap. If the opponent touches it, they will be trapped for a short period of time. The B version will place the trap in front of the opponent, while the D version places the trap behind them.

A jumbo sized bear trap. Deals massive damage if the opponent is struck.

during Heat Up, 214A/C three times

By casting 3 times in rapid succession, Watson can summon a barrage of falling meteors to attack his opponent. This can deal chip damage on block.