Basic ground blocking is the most common defensive option. Stand block can be performed by simply holding

can also be used in situations when jump cannot be performed). Crouch block can be performed by holding 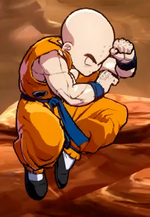 Basic air blocking is even easier: simply hold any backward direction while airborne. Air blocking does not have high/low blocking, but instead come with the restriction that you suffer more blockstun than ground blocking (2 more frames to be precise), which will likely force you to the ground while giving the opponent even more frame advantage.

Landing while in air blockstun does not cancel out the remaining blockstun - instead you will transition immediately into ground crouching blockstun with 4 more frames for the remainder of blockstun.

For example, after blocking an attack in the air that causes 13F blockstun, you land after 10F. That means after landing, you will be in blockstun for 7F before you are free to move.

Also remember that after air blocking, your jump options are restored! This means that you can do something like double jump to block an aerial projectile, then double jump again, or airdash afterwards, if you're not too close to ground.

As with ground blocking, you also can't air block against air Dragon Rush and air throws.

when near an attack will cause the character to stay in place and perform a "pre-blocking" animation. Pre-block will lock you out of walking backward, using Z Assist and Z Change.

When a character is currently in blockstun, they will be able to block attacks coming from behind them by holding either backward and forward directions, or even by not inputting any direction at all. This crossup protection doesn't allow you to make "illegal" blocks: you still must block high/low correctly.

Projectiles and assist-type attacks has an extra layer of protection. If a side switch happens while these attacks are active, they can also be blocked with backward and forward directions, but not by running.

While it is impossible to have left-right mixups using assists with long blockstun, if there's even an 1F gap in the blockstring, the character will turn to face the opponent and you will not be protected from crossups.

A rule of thumb is to always block with respect to the opponent's point character.

While Android 16 is in standing blockstun, Frieza's rising j.L connects if he continues to block high, but whiffs if he switches to blocking low

Most overhead air normals when done with upward momentum will whiff against characters that are blocking low, even if their hitbox and hurtbox are overlapping!

Air normals that push the character upward are also affected by this. There are special cases that aren't air normal, also have this restriction on them.

This results in a few inconsistencies in Sparking state: 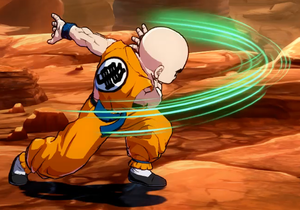 Guards highs, lows and cross-ups. Pushes the opponent away

Z Reflect is a defensive tool that has guardpoint from frame 1 against all strike and projectile attacks beside Sparking Blast. While a whiffed Reflect is vulnerable during its recovery, a successful Reflect cannot be punished by any mean, and it also gains the ability to be canceled into attacks. Furthermore, if you successfully Reflected strike attacks, the opponent will be pushed over halfscreen away.

This is a very strong defensive option as it can beat meaties, safejumps, frametraps, creating space between you and your opponent, and when combined with attack cancelation, it can punish certain attacks that would otherwise be unpunishable with blocking!

Your frame advantage against any attack on Reflect is most often better than on block, but not strictly better all of the time. And depending on the situation, pushing the opponent away might not be desirable. Thus, it is important to learn when and when not to use Reflect.

Note: Videl does not have Z Reflect, but rather, a unique command dodge. 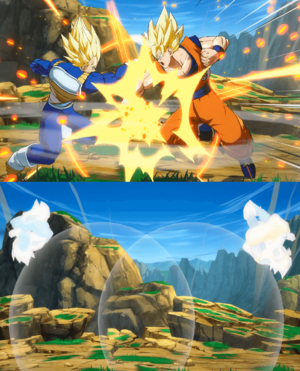 When the opponent catches you with a Dragon Rush, press any attack button between 4 frames before the hit until 4 frames after the hit to break the rush (total 9F: 4F before + the frame it hits + 4F after). Dragon Rush' green flash cue appears on frame 7, thus at point blank, the last frame you can break a Dragon Rush is frame 17 from the flash.

If two Dragon Rushes meet each other, both are automatically broken. This increases the break window as you can input L+M way earlier than the 9F window of other buttons.

On Dragon Rush break, both players break away from each other, recover full screen away, and restore all air options. 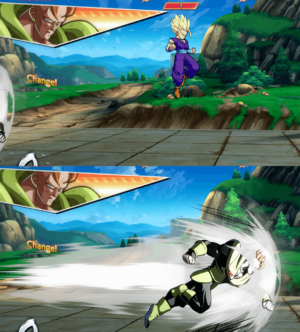 Change! Your teammate will come in with a Super Dash

Hold A1/A2 to swap out your point character with another on your team. An alternative quick Z Change can be performed by pressing

+A1/A2, which can be turned off or configured to

+A1/A2. After using a Z Change, you cannot use your teammates for anything else for a short time. Following that, there's a cooldown on using the character that was called back for a Z Assist or another Z Change. Cooldown will not commence while the opponent is in stun, but will continue if it has already commenced.

You can perform Z Change while in a neutral state or from normals or specials. Players often cancel into Z Change after hitting the opponent with 5H, 2H, j.2H or during a special with a long attacking duration since that allows players to safely change in a new character while extending the combo.

You can not perform Z Change while blocking or while in proximity block animation. 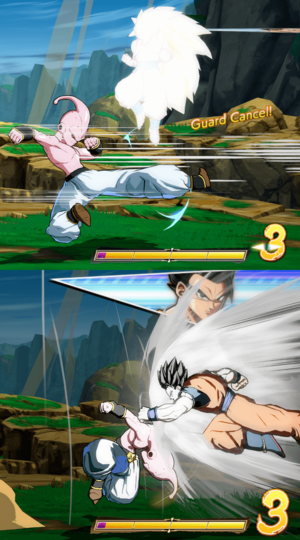 Stop the opponent's offense. Punishable if they anticipate it. Can still be used when down to one character

When you're in blockstun and on the ground, press

+A1/A2 at any point to swap out your point character with another on your team at the cost of 1 Ki Gauge. On hit, the opponent is knocked away about half screen, resetting the game back to neutral. On block, you cannot act and are fully punishable. As with a Z Change, you are locked out of using the character you tagged out for a short period of time. If you are down to one character, you will cancel into an attack that teleports behind the opponent instead, similar to a Vanish, only much slower and with some forward movement after the teleport.

Guard Cancel and combos started with it cannot KO.

during blockstun will trigger a vanish at the cost of 2 bars. This allows for escapes from stronger pressure.

Z Reflect and Super Dash can also be performed during Ki blast's blockstun as a weaker version of Guard Cancel.

More on this is described here. 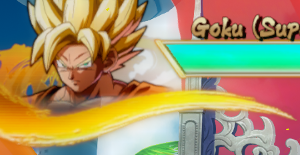 A gold trim appears around the portrait

When you're down to one character left, they will be given 1 Ki gauge, a 20% damage boost and will deal more unrecoverable health.

Resurrecting a teammate with Shenron will remove this buff until you're back to one character again.